NAACP Leaders Arrested Protesting Super-Not-Racist Jeff Sessions, For No Reason At All! 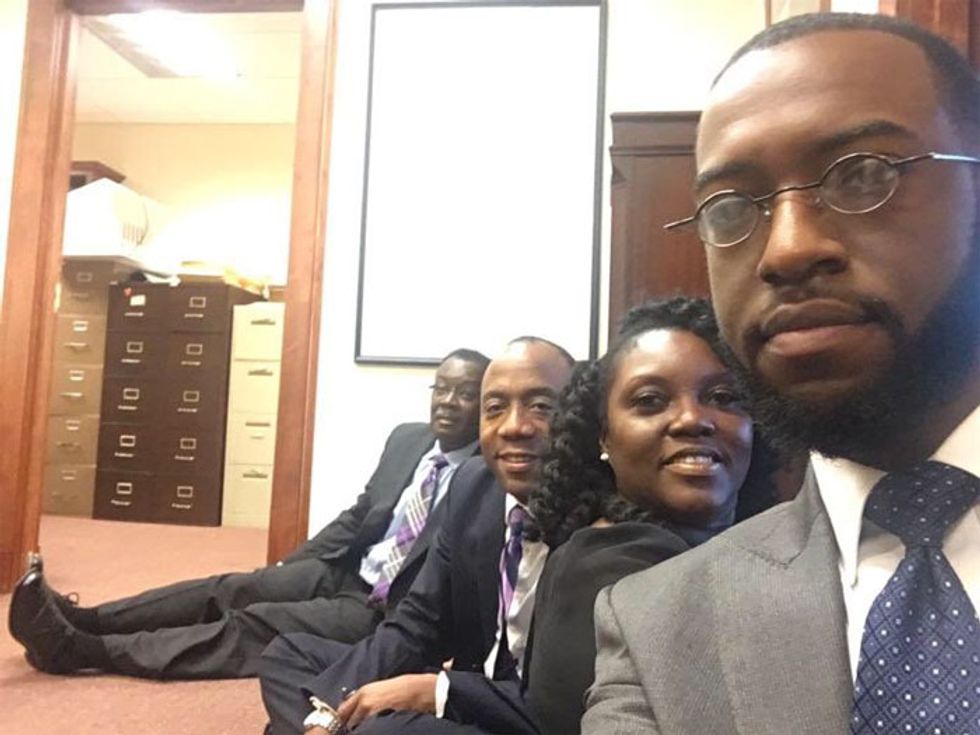 Protesters from the NAACP were arrested Tuesday evening after holding a day-long sit-in at the Alabama offices of Sen. Jeff Sessions, demanding he withdraw his name from nomination as Donald Trump's attorney general. The protesters seemed to be under the impression that Sen. Sessions has "hostile" attitudes toward civil rights and voting rights, even though Sessions is quite certain he's as fair-minded as they come. Six of the protesters were arrested for trespassing, according to AL.com, including the group's national President and CEO Cornell William Brooks, Alabama State Conference President Bernard Simelton, and Lizetta McConnell, head of the NAACP's Mobile branch.

Team Of Evils: Jeff Sessions Was Too Racist To Be A Federal Judge, But He Could Be Your Next Attorney General!

Yes, that election happened. And here's your proof that it's not just a bad dream.

The protest started with about 30 people staging a sit-in at Sessions's office in Mobile to call attention to the senator's dismal record on civil and voting rights, which was bad enough that when he was appointed to a federal judgeship in 1986, the Republican-led Senate Judiciary Committee rejected his nomination. Apparently what was too racist in the politically correct days of the Reagan years is now no longer such a problem for Republicans.

In a statement issued during the sit-in, Brooks said,

As a matter of conscience and conviction, we can neither be mute nor mumble our opposition to Sen. Jefferson Beauregard Sessions becoming attorney general of the United States [...] Sen. Sessions has callously ignored the reality of voter suppression but zealously prosecuted innocent civil rights leaders on trumped up charges of voter fraud. As an opponent of the vote, he can't be trusted to be the chief law enforcement officer for voting rights.

A spokesperson for Sessions, Sarah Isgur Flores, issued a statement contesting those charges, citing Sessions's endorsements from law-enforcement groups as proof of his commitment to civil rights, because that makes all kinds of sense:

Jeff Sessions has dedicated his career to upholding the rule of law, ensuring public safety and prosecuting government corruption. Many African-American leaders who've known him for decades attest to this and have welcomed his nomination to be the next Attorney General. These false portrayals of Senator Sessions will fail as tired, recycled, hyperbolic charges that have been thoroughly rebuked and discredited. From the Fraternal Order of Police and the National Sheriffs Association to civil rights leaders and African-American elected officials, to victims' rights organizations, Senator Sessions has inspired confidence from people across the country that he will return the Department of Justice to an agency the American people can be proud of once again.

Because of course no one would have any reason to be proud of the Justice Department now, since it keeps insisting restrictions on voting are a bad thing and that gay people have rights. Sessions simply wants to return the Department to something Lester Maddox could be proud of.

Brooks and the other demonstrators were arrested around 6:30 p.m. after refusing an order from the building's management to disperse. Brooks and those arrested with him could be seen on a video livestream kneeling in prayer before police led them away to a police van.

“We are about to be arrested,” said [Brooks], cutting short a phone call with a reporter on Tuesday night. “We are doing this as an act of civil disobedience standing in the tradition of Rosa Parks and members of the N.A.A.C.P. community.”

On the Facebook livestream, Mr. Brooks could be seen shaking hands with a line of police officers standing in Mr. Sessions’s office.

“We are all well aware of the laws of trespass,” Mr. Brooks told the police. “We are engaging in a voluntary act of civil disobedience.”

We're not sure how they can call it civil disobedience, since they didn't take over the office for two months while armed with semiautomatic rifles, or even illegally graze cattle on federal land. Get ready to see the sit-in described in the Wingnuttosphere as a lawless takeover of Sessions's office, and perhaps as a riot. Or for the protest to be completely ignored: It didn't even make the front page of Dead Breitbart's Home for White Panic Wednesday morning. That site was instead dominated by stories about the exciting new Republican Congress and all the scary Muslims doing crime in Europe.

As we prepared to post this story, Donald Trump's Twitter feed, occupied with a lot of nonsense about how no one can afford Obamacare (in a year when record numbers of people signed up for it), hadn't gotten around to mentioning the sit-in either.

We're not entirely sure Donald Trump, who pines for the days when you could punch protesters in the face and have them beaten so badly they'd be carried out on stretchers, would approve of how Sen. Sessions responded to the occupation of his office. Mr. Simelton said no police were in the office during the day, and that Sessions even ordered the protesters lunch, which the New York Times said was "taken to the office by a somewhat confused deliveryman."

“Everybody has been very polite and hospitable, and as a matter of fact Senator Sessions sent us a pizza and a Pepsi,” Mr. Simelton said. “If you talk to Senator Sessions, you can tell him I drink Coke.”

That may not go over very well with the self-proclaimed "law and order" president. Not a single person tear-gassed? Weak!