NASA Discovers Earthlike Planet For Donald Trump To Be President Of: Your Saturday Nerdout 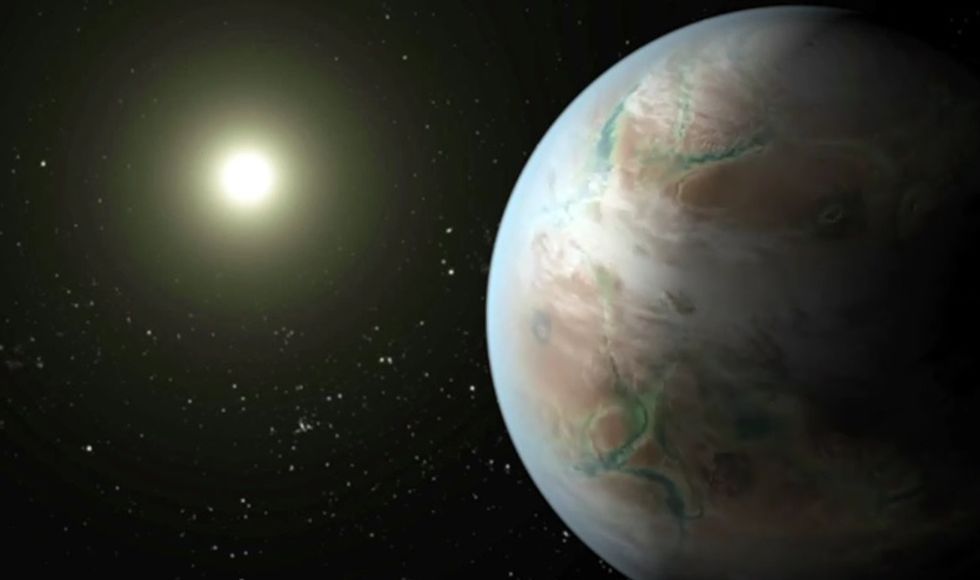 It's Saturday, and time to be ridin' Nerdy. We really wanted to show you an allegedly cool video of Neil deGrasse Tyson explaining the history of the universe in under eight minutes, but it got "removed as a violation of YouTube's policy on repetitive, misleading or inappropriate metadata." So there you go: Not even NdGT can sneak "live nude girls" into metadata on a science video. Once those metadata issues get fixed -- shouldn't Neil have his own personal Mr. Scott? -- we'll give that sucker another try.

Here's something that works: Nasa's Kepler orbiting telescope found the closest match so far to an Earthlike planet, with the exciting name "Kepler 452b," which is nowhere nearly as cool as it should be (as Calvin pointed out to Hobbes, scientists are terrible at naming things, and the "Big Bang" should be the "Horrendous Space Kablooie").

The planet is about 60% larger than Earth, and its orbit is within the "Goldilocks zone" -- not too hot, not too cold -- for liquid water, and therefore possibly Life As We Know It. If it's a rocky planet -- astronomers say the odds are "50 percent to 62 percent" -- it's just possible that the thing has life on it. Jon Jenkins, of NASA’s Ames Research Center, told the New York Times:

“We can think of Kepler-452b as an older, bigger cousin to Earth, providing an opportunity to understand and reflect upon Earth’s evolving environment,” he said. “It’s awe-inspiring to consider that this planet has spent six billion years in the habitable zone of its star, longer than Earth. That’s substantial opportunity for life to arise, should all the necessary ingredients and conditions for life exist on this planet.”

Asked if any radio telescopes had pointed at the planet to try to detect extraterrestrial radio broadcasts, Dr. Jenkins said, “I hope so.”

But don't start planning a visit just yet:

To determine whether Kepler 452b deserves a place on the honor roll of possible home worlds, however, astronomers have to measure its mass directly, which requires being close enough to observe the wobbling of its star as it is tugged around by the planet’s gravity. For now, that is impossible, as Kepler 452b is 1,400 light-years away.

As we mentioned Thursday, Ted Cruz is pretty sure that James T. Kirk, captain of the "Serenity Now" spaceship on the popular Star Wars television series, was probably a Republican, an opinion which we found less palatable than a week-old plate of gagh. Well! This did not sit well with the famous Rocket Man, who grabbed his Personal Access Display Device and interfaced with Earth's comms network to voice his disagreement with Cruz:

So there. But saying Star Trek was "not political" is almost as silly as claiming Kirk for the GOP, isn't it? It was a humanist, post-scarcity fantasy about an interplanetary United Nations bringing science and enlightenment to the galaxy, a veritable Battlestar Collectiva of lefty social commentary. But fine, maybe he just meant it wasn't partisan.

Speaking of starship captains, Jean-Luc Picard would like you to contribute to a Kickstarter that sounds like it might have been an April Fools joke, but is actually very real science: The SnotBot, a project to collect whales' exhalations so's marine biologists can get a lot of useful data without bothering, pestering, hectoring, or bullyragging the whales:

Here is more about just what the hell a snotbot is and why we should give them money:

Snotbots are custom-built drones created in partnership between Ocean Alliance and Olin College of Engineering. They hover in the air above a surfacing whale and collect the blow (or snot) exhaled from its lungs. Snotbot then returns that sample back to researchers a significant distance away.

Having a lung lining sample is crucial. With it we can see virus and bacteria loads, analyze DNA, and look for environmental toxins that have been absorbed into the whale’s system. Perhaps most importantly, we can test for levels of hormones, which gives us information on the reproductive cycles and stress levels of these creatures as they are increasingly impacted by human activity in their natural habitats.

In the “BS” era of data collection (Before Snotbot), the standard way of getting a data sample of a whale (living outside captivity) involved chasing an extremely acoustically sensitive mammal with a loud motorboat and subsequently shooting it with a sampling dart from a crossbow.

Imagine if everything your doctor knew about your health came from chasing you around the room with a large needle while blowing an air-horn. The chart would say something like, “elevated stress levels, prone to shrieking.” It's inaccurate. This is what we believe is going on with some of the current whale data due to the invasive nature of previous sampling methods, and with Snotbot we mean to correct it with a clearer picture of whales that are undisturbed.

If these guys do science as good as they do similes, they must be really good science-doers! And we need a lot of healthy whales, since their poop could save the planet. [Tip o' the snot-covered hat to Alert Wonker "cousin itt" for this one]

Grifters Happy To Assist With Your Seattle Earthquake Fear

So you already know that the whole darn Pacific Northwest is about to become a crappy disaster movie in real life, with Seattle and Portland falling into the Pacific because tectonic plates will Juan de Fuca you up. Happily, sellers of "emergency supplies" are jumping into the fray, selling all sorts of excellent survival supplies that can gather dust in your garage along with your Y2K Bug-Out bag (Yes, yes, we know, FEMA recommends that every home have an emergency kit, and it really is a good idea; there's just something weird about how science stories morph into buying binges).

Also, reports that Yr Dok Zoom will welcome you all to stay with him in Boise may be exaggerated. I live in a very tiny apartment that smells like a blogger lives there.

We learned this week that Michael Jackson wanted to play Jar-Jar Binks in the first Star Wars prequel. Ahmed Best, who voiced the loathsome Gungan, revealed this shocker in an interview with Vice, explaining that George Lucas introduced him to Jackson backstage after a concert at Wembley Stadium:

George introduced me as ‘Jar Jar’ and I was like, ‘That’s kind of weird. Michael was like, ‘Oh. OK.’ I thought, ‘What is going on?’ After Michael had driven off, we all go back up to a big afterparty. I’m having a drink with George and I said, ‘Why did you introduce me as Jar Jar?’ He said, ‘Well, Michael wanted to do the part but he wanted to do it in prosthetics and makeup like ‘Thriller.’’ George wanted to do it in CGI. My guess is ultimately Michael Jackson would have been bigger than the movie, and I don’t think he wanted that.

We aren't sure how to feel about this. It's hard to think of anything that could have made Phantom Menace worse, but Michael Jackson in a rubber suit might have managed it. It's also disturbing to think that somewhere in the Multiverse, it had to have happened.

Chuck Jones Was A Freaking Genius, And Here's Why

Tony Zhou is a guy who does a series of video essays about movies called Every Frame a Painting. If you love Warner Brothers cartoons, you need to watch this terrific analysis of how Chuck Jones, the bestest animator of all time (shut up, there's no arguing on this), developed as a creator of visual comedy:

If you fail to watch this video, God will kill a wabbit.