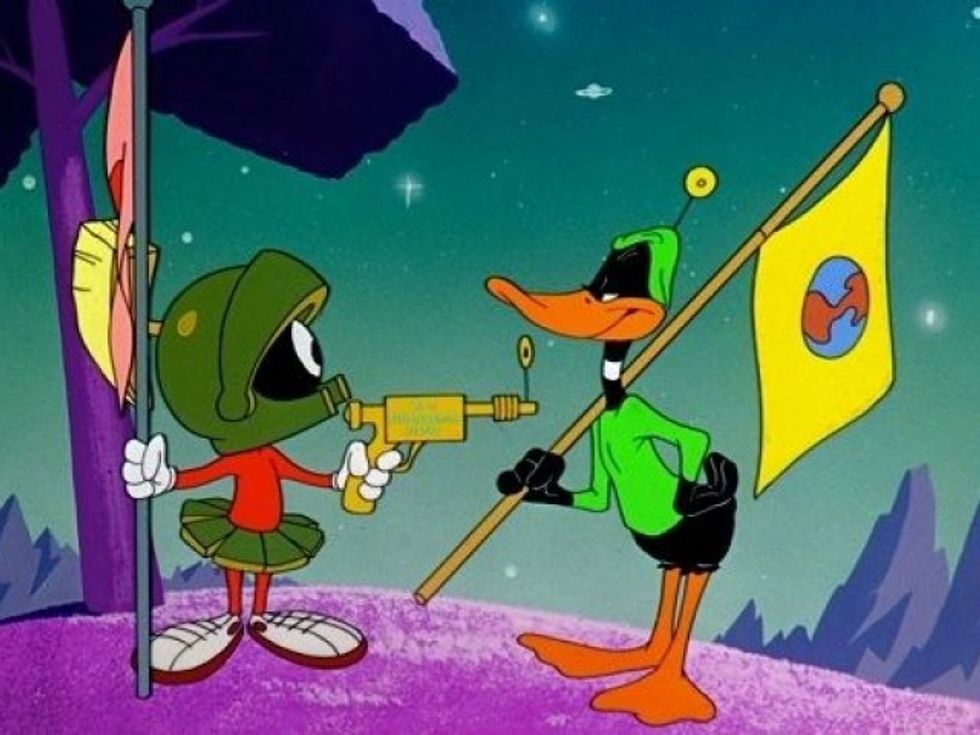 Exciting nerd news, as NASA confirmed what had been suspected for a while now: Mars has liquid water! At least some of the time, under the right conditions.

Scientists reported on Monday definitive signs of liquid water on the surface of present-day Mars, a finding that will fuel speculation that life, if it ever arose there, could persist to now.

“This, I think, gives a focus of where we should look more closely,” said Alfred S. McEwen, a professor of planetary geology at the University of Arizona and the principal investigator of images from a high-resolution camera on NASA’s Mars Reconnaissance Orbiter.

The researchers identified "waterlogged molecules -- salts of a type known as perchlorates -- in readings from orbit."

McEwen explained that the findings amounted to "a direct detection of water in the form of hydration of salts ... There pretty much has to have been liquid water recently present to produce the hydrated salt.”

NASA planetary science Director Jim Green said that Mars once had lakes and oceans, but that they disappeared as the planet's climate changed:

And no, he didn't blame your SUV for climate change on Mars; neither does this mean that foolish hu-mons can keep pumping CO2 into the atmosphere with no ill effects, although we expect some moron on Fox to say that within hours, if they haven't already.

The best evidence for water on Mars is seen in dark streaks on the sides of craters and mountains, which lengthen and darken during Martian summers, faded away during colder periods, then reappeared the following year.

They named the streaks recurrent slope linae, or R.S.L.s, and many thousands of them have now been spotted. “It’s really surprisingly extensive,” Dr. McEwen said.

Scientists suspected that water played a critical role in the phenomenon, perhaps similar to the way concrete darkens when wet, with no change in the shape of the surface, and returns to its original color when dry.

Using a spectrometer, graduate student Lujendra Ojha, of the Georgia Institute of Technology, was able to detect the hydrated salts at several locations; the salts went away when the R.S.L.s faded.

“It’s very definitive there is some sort of liquid water,” Mr. Ojha said.

The perchlorate salts lower the freezing temperature, and the water remains liquid. The average temperature of Mars is about minus 70 degrees Fahrenheit, but summer days near the Equator can reach an almost balmy 70.

As of yet, planetary scientists haven't determined whether water on Mars is seeping up from underground or is being absorbed from the air by the perchlorates; for the latter to be the case, the Martian atmosphere would have to be more humid than currently believed. The presence of water on Mars greatly increases the possibility that evidence of life on Mars may be found, although it's not expected to be wearing big goofy sneakers.

As of press time, Michelle Malkin has not yet found a way to be outraged about the findings, although when the Curiosity Rover reached Mars in 2012, she managed to turn the rover's success into proof that liberals are terrible hypocrites.

This much is certain: former Vice President Dan Quayle has not been vindicated. In 1989, Quayle offered this scientific wisdom:

Mars is essentially in the same orbit . . . Mars is somewhat the same distance from the Sun, which is very important. We have seen pictures where there are canals, we believe, and water. If there is water, that means there is oxygen. If oxygen, that means we can breathe."

NASA scientists have also downplayed speculation that Martian soil and surface water would be suitable for growing a potatoe.

Sadly, the NASA press conference was not accompanied by this David Bowie song: