National Enquirer: Catfighting Michelle Obama Has 'Claws Out' For That Nice Ann Romney 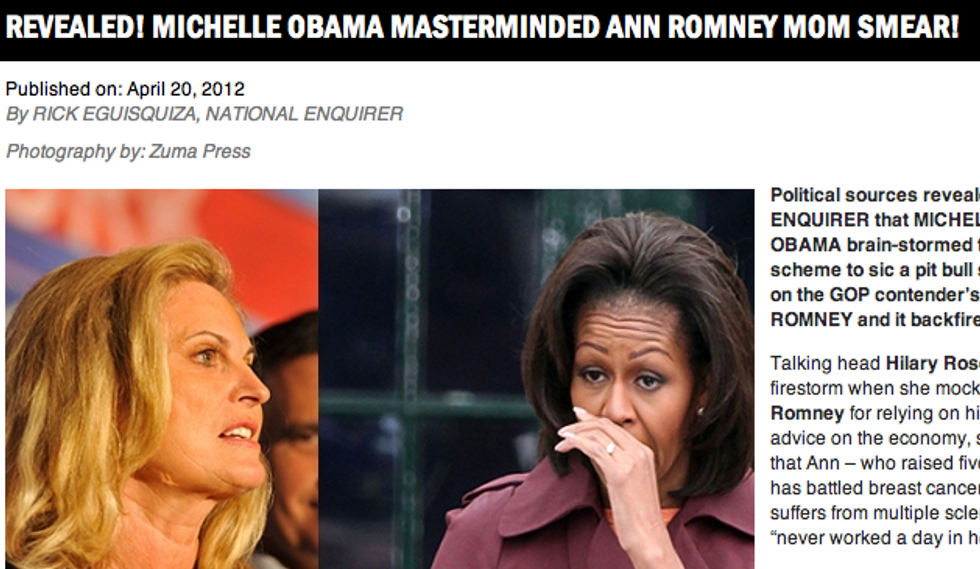 Tell us all about it, National Enquirer!

[B]ehind the scenes, [Michelle Obama's] fingerprints were all over the scandal, said an inside source.

“Michelle had her claws out to get Ann, but it quickly backfired and Barack was livid when he heard she had secretly directed the attack,” said the source.

“What Michelle didn’t remember was that when Barack was running for president, he told ABC’s ‘Good Morning America’ that it was unfair to attack Michelle, saying his wife was off limits. Here they were, however, doing the same thing to Romney’s wife four years later.

“But even though Michelle was the instigator, the political grenade blew up in the president’s face.”

“Michelle thought Rosen, an out-of-the-closet lesbian and close pal, could be their attack dog, but she miscalculated badly by going after stay-at-home moms,” said the source.

“Behind the scenes, Michelle has vented that she worked hard as a lawyer in addition to being a mom.

She also made jokes about Ann Romney ‘working at leading a rich lifestyle,’ includ­ing the fact that Ann competes in horse shows.

“Michelle is determined to do whatever it takes to keep her husband in the White House. She’s learned politics is a dirty business. It’s only a matter of time before she comes up with another plan to go after Ann.”

BUT ANN, 63 – a dedicated homemaker who’s been married to the former Massa­chusetts governor for 43 years – is getting the last laugh in the first face-off of what promises to be a months-long catfight. She’s stepped up to become a champion for the rights of stay-at-home moms.

“My career choice was to be a mother,” Ann told a TV reporter. “And I think all of us need to know that we need to respect choices that women make.”

Why does Michelle Obama hate moms, and America? [NationalEnquirer, via Wonkette operative "chascates"]