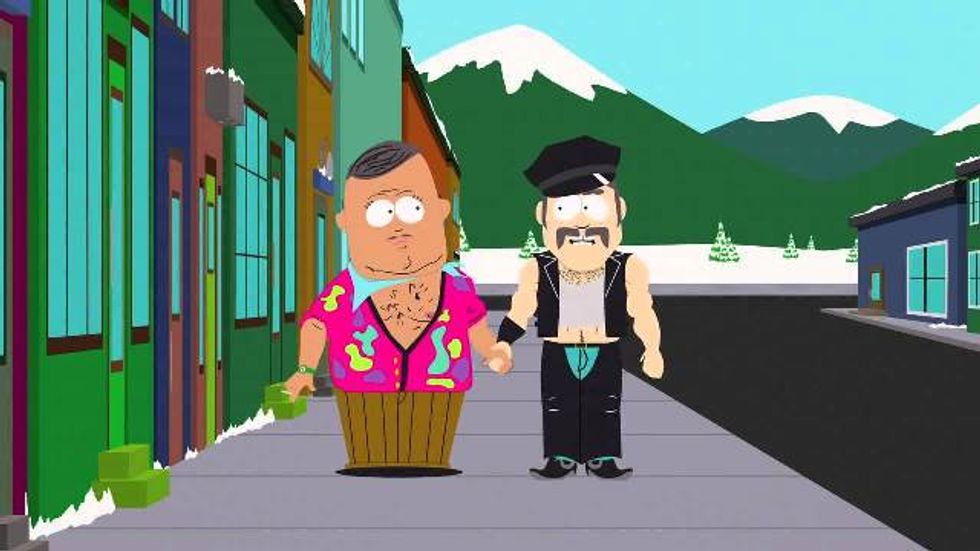 California nutmuffin Randy Thomasson is getting tired of gays marrying all willy nilly everywhere -- like it's legal or something -- so he's asked that governors across this great land use their state armies to shoot those gay couples, for freedom.

Now by all accounts, 2014 was a terrible year to be against gay marriage. A full 70 percent of the nation now lives in a state in which they could marry their same-sex box turtle if they were into that, and it’s left our nation’s oppressed homophobes feeling a mite bit on edge.

Take, for example, our friend Thomasson, creator of SaveCalifornia.com (save it from bonin’) and leader of the Campaign for Children and Families (seriously, if you wanna start a hate group, just add the word “Family” in your title and you’re gold). Randy is feeling more than a bit a-skeered of the tidal wave of legally monogamous buttsex rolling across this great land. He’s so a-skeered, in fact, that he’s ready to use some of Sharron Angle’s second amendment remedies to do something about it. This will go well.

In a letter issued to other “Pro-Family” leaders (read: Pro-only-the-families-we-like leaders), Randy expressed his concern with the crisis of homosexual “marriages” (scare quotes his) occurring in states where it’s still illegal. But Randy has found a solution!  It’s simple: We’ll shoot the gay couples!

Each governor is authorized to call out his/her state’s militia or National Guard to enforce written laws and maintain public order against foreign and domestic enemies.

Your correspondent hasn’t been called a domestic enemy since that time he cut his roommate off from more Fireball shots, so this is a nice change.

While Randy is not explicitly calling for National Guards to open fire on gay couples to stop their sinful government contracts, he is suggesting it very loudly. Further down his email, he notes:

In view of the current crisis on marriage, a constitutional governor can and should do the following:

...Utilize the support of the state’s attorney general (if that constitutional officer is willing to stand alongside) or use the state’s National Guard to enforce the law at county clerk’s offices.

Your correspondent can think of only one way the National Guard can “enforce the law,” and it comes at the end of a barrel.  Now unless the National Guard is planning to enforce the law with t-shirt cannons, Randy is quite literally requesting that people be shot if they try to get gay married or allow someone else to get gay married.  What a sweetheart.

Not to lose their head-start in the Homophobe Olympics (Homophobolympics?), the Archdiocese of the Florida Catholic Church has declared that not only is the church against any kind of legalized scissor marriage, but they’re against anyone who even kinda likes legalized scissor marriage.  Archbishop Thomas Wenski of Miami issued his own email blast to employees of the Archdiocese, reminding them that Jesus is always watching them, and he knows when they’ve committed conduct inconsistent with the teachings of the Catholic Church.

The Archbishop informed his employees that anyone found posting views favorable to gay marriage on Facebook or Twiter could encounter:

Disciplinary action, including termination, even if it occurs outside the normal working day and outside the strict confines of work performed by the employee for the Archdiocese.  Employees should exercise discretion when posting on social media sites, and note that online activity indicative of prohibitive behaviors may subject an employee to disciplinary action or termination.

Then he ends the missive in the most pithy, Catholic way your Irish correspondent has ever seen: “Be assured of my gratitude for all that you do for the Archdiocese of Miami each day.” We will fire and/or send you straight to hell if you so much as think something we don’t like, but don’t forget we love you!