National Security Advisor Had Sweaty Phone Sex With Russian Ambassador Maybe. Why Do You Ask? 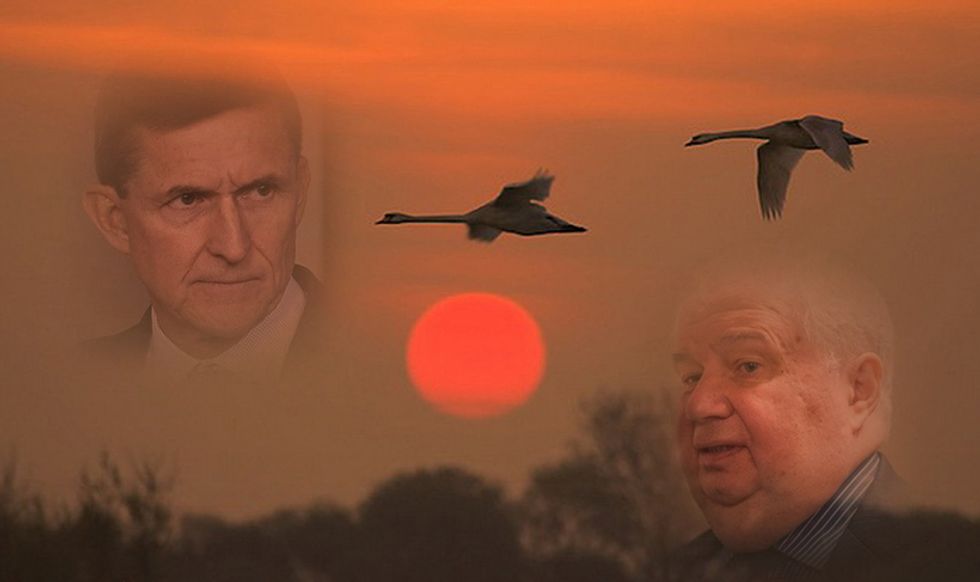 You know how sometimes, when you're in the middle of a very busy presidential transition and you have a lot of irons in the fire, you sometimes have a few conversations with a Russian ambassador about sanctions that have just been put in place by the current president, and you might just forget that you talked about those sanctions altogether? That's the kind of day Mike Flynn, President Trump's national security advisor, has been having. Turns out that even though Flynn has denied several times that he ever discussed sanctions with the Russian ambassador, he actually did -- a month before Trump was sworn in, when technically, Barack Obama was still the president of the United States. People get so upset over little details like "who's actually president" and "undermining American foreign policy," it's so silly. Is that some kind of big deal, really? Tell us more, Washington Post:

Flynn’s communications with Russian Ambassador Sergey Kislyak were interpreted by some senior U.S. officials as an inappropriate and potentially illegal signal to the Kremlin that it could expect a reprieve from sanctions that were being imposed by the Obama administration in late December to punish Russia for its alleged interference in the 2016 election.

Funny thing, though: On Wednesday, Flynn emphatically denied -- twice -- that he'd discussed the sanctions with Kislyak. By Thursday, Flynn seemed a little less certain about that -- a spokesperson said instead that Flynn "indicated that while he had no recollection of discussing sanctions, he couldn’t be certain that the topic never came up." Honestly, doing foreign policy when you're not actually in the government yet seems like the sort of thing a person might remember.

According to "current and former U.S. officials" who spoke to the Post, the FBI is still examining Flynn's contacts with Kislyak; the officials were careful to say that while the two did discuss sanctions, "they did not see evidence that Flynn had an intent to convey an explicit promise to take action after the inauguration," which strikes us as some very carefully vetted phrasing on the Post's part.

So, yes, that would be rather a big deal if, while Barack Obama was imposing sanctions on Russia for its cyber campaign designed to help Donald Trump, Trump's top security adviser was chatting with the Russian ambassador about those sanctions and what might happen with them after Trump came into office. That could possibly be a matter of concern. Not nearly as worrisome as Hillary Clinton's having a private email server, but still maybe something worth looking at. Maybe Jason Chaffetz has a spare minute?

Kislyak and Flynn were apparently bigtime chat buddies, in contact with each other before the election and during the transition, though it was probably perfectly innocent stuff, like maybe they were just talking about TV shows. The Walking Dead was pretty intense this season, after all. You know how friends like to keep in touch!

In a recent interview, Kislyak confirmed that he had communicated with Flynn by text message, by phone and in person, but declined to say whether they had discussed sanctions.

So that'd be a "totally talked about sanctions."

Now, as it happens, TrumpWorld has been saying all along that Flynn and Kislyak hardly had any contact at all last year, and certainly never talked about the sanctions. For instance, Mike Pence is quite certain of it:

“They did not discuss anything having to do with the United States’ decision to expel diplomats or impose censure against Russia,” Pence said in an interview with CBS News last month, noting that he had spoken with Flynn about the matter. Pence also made a more sweeping assertion, saying there had been no contact between members of Trump’s team and Russia during the campaign. To suggest otherwise, he said, “is to give credence to some of these bizarre rumors that have swirled around the candidacy.”

Except it looks like maybe that's not true at all: The Post spoke with "Nine current and former officials, who were in senior positions at multiple agencies at the time of the calls," who all confirmed that Flynn had made specific references to the election-tampering sanctions.

Two of those officials went further, saying that Flynn urged Russia not to overreact to the penalties being imposed by President Barack Obama, making clear that the two sides would be in position to review the matter after Trump was sworn in as president.

“Kislyak was left with the impression that the sanctions would be revisited at a later time,” said a former official.

Huh! How do you like that? Another official said that either Pence was mistaken, or Flynn had misled Pence about the nature of his contacts with Kislyak. The Post notes "An administration official stressed that Pence made his comments based on his conversation with Flynn." We love the Trump administration -- that sure sounds to us like a possible prelude to Flynn being thrown under a very leaky bus.

Now, if Flynn was actually doing private diplomacy during the transition, he may have violated the Logan Act, but he probably doesn't have to worry about being prosecuted, because no one's ever been prosecuted under Logan, and because he's now part of an administration that seems quite happy to ignore whatever laws it doesn't like. Besides, any attempt to charge him would be seen as political persecution, and we certainly can't have that.

Intelligence Experts Agree: Russia 5 To 10 Years Behind In Meme Technology

They're Russian dancing memes / They might be going to extremes / They've got confusing Cold War themes / Is it as clumsy as it seems?

In any case, Flynn's alleged urging that Russia not overreact to the sanctions seems to have paid off, since instead of expelling U.S. diplomats, Russia's reaction was limited to some really lame memes, and Vladimir Putin instead saying he'd focus on rebuilding relations with the US, followed by Donald Trump tweeting that Putin was a very smart man indeed. A lot of people seem to think maybe there might have been some connection between Flynn's contacts with Kislyak and the surprisingly mild Russian reaction, but you know how some people see conspiracies everywhere.

“Something happened in those 24 hours” between Obama’s announcement and Putin’s response, a former senior U.S. official said. Officials began poring over intelligence reports, intercepted communications and diplomatic cables, and saw evidence that Flynn and Kislyak had communicated by text and telephone around the time of the announcement.

Pfft! Evidence of contacts! The Trumpers have explained again and again that the only thing Flynn and Kislyak talked about were Christmas greetings. OK, Christmas greetings, and the crash of a Russian jet carrying a military choir. And also the assassination of Russia's ambassador to Turkey. Oh, yes, and they talked about setting up a later call between Trump and Putin. But definitely not the sanctions. It's all completely coincidental that Flynn and Kislyak happened to be talking a lot between the time Obama announced the sanctions and the mild Russian response. Administration officials insist there was no discussion of sanctions, and if you can't trust the good word of people in the Trump administration, then who can you trust? Some lame "journalists" and their "sources" in "government?"

It's really disappointing to see how cynical you people have become.