Nazis, Guys Who Want To Murder Coeds, And Trump Junior All Love This One Weird Meme! 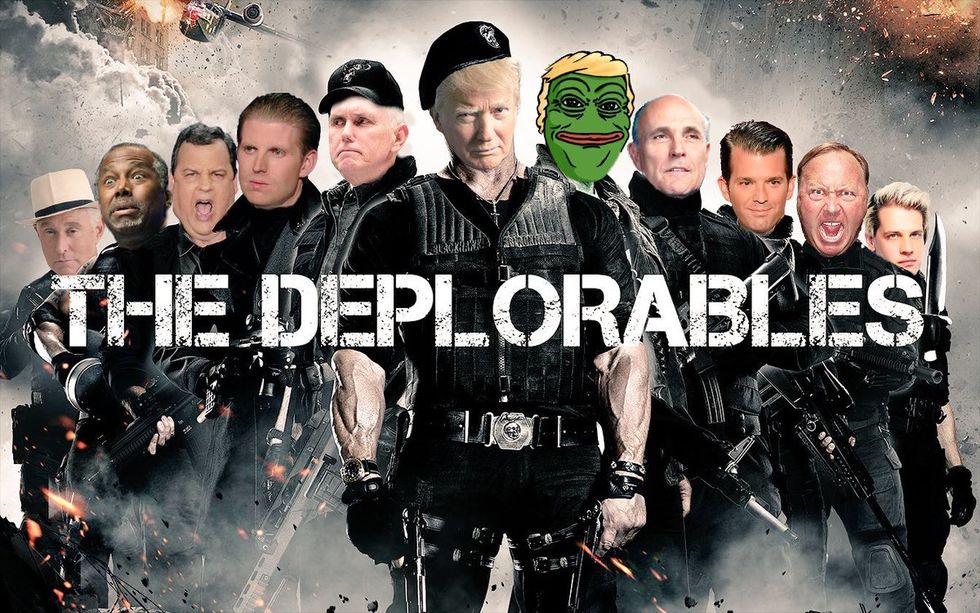 This weekend, Trump supporters got all super mad because Hillary Clinton said half of them were "deplorable." Which, honestly, was a little more generous than I'd be. As my mom always says, you'd have to be either incredibly mean or incredibly stupid, or some combination thereof, in order to vote Republican -- because otherwise it would just not make sense to do. And the Trumpists are like regular Republicans on steroids. Or like, regular Republicans on whatever those weird supplements are that Alex Jones shills on his talk show.

Hillary Clinton Says True Thing About Trump Supporters, Everybody Horrified Or Something

If you are butthurt about Hillary calling Trump supporters a 'basket of deplorables,' you're probably one of the folks she was talking about!

In response to that, both Roger Stone and Donald Trump, Jr. proudly shared a meme of themselves alongside Trump and other supporters -- including Alex Jones and Milo Yiannopoulos and Pepe The Frog, who has recently become a symbol of the new White Nationalist/Alt-Right movement.

You know, this would probably be more effective as a meme if the people in it were not actually deplorable. Or hell, if they weren't all dudes. What? They couldn't stick Ann Coulter in there? Or the rotting corpse of Phyllis Schlafly? That seems a little sexist!

Now, many people have brought up the fact that Pepe the Frog has become a symbol of the alt-right white nationalist movement. Which it has! There was even a picture of Donald Trump as Pepe in that gross flyer we told you about on Friday that Stormfront is using to get kids interested in becoming Nazis.

However! There's even more to all of this than meets the eye.

I'm not really a meme person, so the first time I really paid any attention to the Pepe the Frog meme was after Christopher Harper-Mercer shot up Umpqua Community College in Oregon. As you may recall, before the shooting occurred, Harper-Mercer posted about it on the 4chan message board /r9k/, where "Angry Pepe" is considered something of a site mascot.

Harper-Mercer was subsequently cheered on by others on the board, who were thrilled to see a "beta uprising" taking place. The "Beta Uprising" is a meme over on /r9k/ about "beta" men taking their vengeance upon women (who are evil for refusing to give them the sex and attention they so deserve) and "alpha" men, whom they refer to as "Chad Thundercocks." This is usually played out by one "brave" beta finally standing up for himself, and then all the other betas banding together and enslaving women and "distributing them equally among the male population." These tales of beta uprisings are generally posted along with a picture of "Angry Pepe."

Pretty gross, huh! I wrote all about this for Bust last winter, and if you want some more background on this shit you can go check that out.

When the Oregon shooting happened, it was considered, on 4chan, to be a form of "meme magic." This is all pretty ridiculous, so I'm going to ask you to bear with me for a second here. Basically, it's this thing where they "joke" that they can use their memes to make things happen in the real world, like that shooting or the Slender Man stabbing, or even spreading Ebola. According to dumbass 4chan lore, this "magic" is created by "The God Kek." Which is why you'll see a lot of "Praise Kek" shit coming from Trump supporters, particularly on Reddit.

In addition to that, those on the Reddit board r/The_Donald have also adopted the "chicken tendies" meme from them, also associated with the wacky "beta uprising" shit. This shit derives from a story on /r9k/ about an "incel NEET" (a beta male who is "involuntarily celibate" and "Not in Education, Employment or Training") who lives in his mother's basement and yells at her to bring him his "chicken tendies" all the time or some shit.

Trump supporters also tend to use the term "Red Pill" a lot, which -- as we've previously discussed -- is a term to describe a man who has realized that all women are evil and bad and only want him for his money or something.

So yeah, there's not only a major crossover going on with white nationalists and their memes, but also some super fucking evil misogynists and theirs. I'm not trying to get all Glenn Beck here, but all this shit is interrelated. I'm not saying that Stone or Trump Jr. have any idea what the hell Pepe the Frog even is, or who these people even are -- but the fact that Pepe, chicken tendies, Kek and the Red Pill have turned into Trump supporter memes should give you an idea of who their base is. And that base is, for lack of a better word, pretty damned deplorable.