Nebraska Guy To Regulators: Here, Have A Cold Glass Of Delicious Fracking Juice! 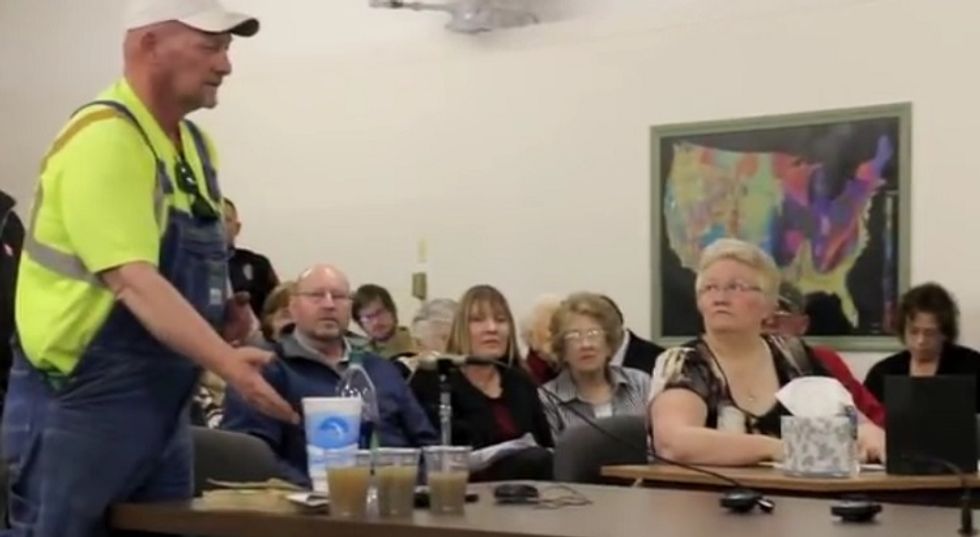 This post sponsored by a grant from the Patty Dumpling Endowed Chair for coverage of oil spills, fracking, and mystery fluids

Public hearings don't generally make for exciting video, short of the occasional outburst by fans of black helicopters or people worried about buttsex enzymes, but they can also be enlivened by an activist with a good visual aid. For example, here's a Nebraska man inviting members of the state's Oil and Gas Conservation Commission to drink glasses full of a mystery chemical mix, to make the point that he's not so crazy about a proposal to pump other states' fracking wastewater into wells in Nebraska.

The state is considering a plan by Terex Energy Corporation to "inject up to 10,000 gallons per day of wastewater from fracking in Colorado and Wyoming into an old oil well on a ranch in Sioux County, in the northwest corner of Nebraska." One member of the commission tried to assure citizens that concentrations of harmful chemicals in fracking wastewater were so low, the human body could "handle" occasionally ingesting some of the stuff. So Concerned Citizen James Osborn came to the hearing, poured bottled water into three plastic cups, and then added a mixture of mystery goo to the water, explaining that it was perfectly safe but he couldn't tell the commissioners what was in it, since that was "a trade secret."

Of course, since the hearing was only for comments from the public, the commissioners declined to say whether they'd try the stuff. Saved by Robert's Rules of Order!

Osborn noted that, as an agricultural state, "Everything about Nebraska runs on water," and if the state starts importing large amounts of surrounding states' fracking wastewater, “There is no doubt that there will be contamination, there will be spills.”

Bill Sydow, director of the Oil and Gas Conservation Commission, says that Nebraska is already storing post-fracking waste, and told ThinkProgress that it's no big deal, really:

“Nevertheless, it will be completely kept out of the environment at the surface,” he said. The injection well named in Terex’s application is an “excellent candidate” for water storage, Sydow said, because it is relatively new and has four layer of concrete protection.

Honestly, Nebraskans, why are you even bothering to complain about this? Toxic goo is a necessary byproduct of a healthy economy, and you wouldn't want to be job-killing commies, would you? Besides, it's perfectly safe, and the stuff never ever spills. Hardly ever.

Just in case you're keeping track, this is the second time in a week that we've featured stories about people declining to drink tumblers full of chemical substances that they've proclaimed to be perfectly harmless for humans. We kind of hope this doesn't become a trend like the "icebucket challenge," because you know there are teenagers out there who would drink toxic sludge, which honestly can't be all that much worse than Mountain Dew. For that matter, maybe that's the solution: Just add caffeine and sugar to the wastewater and call it an "energy drink."