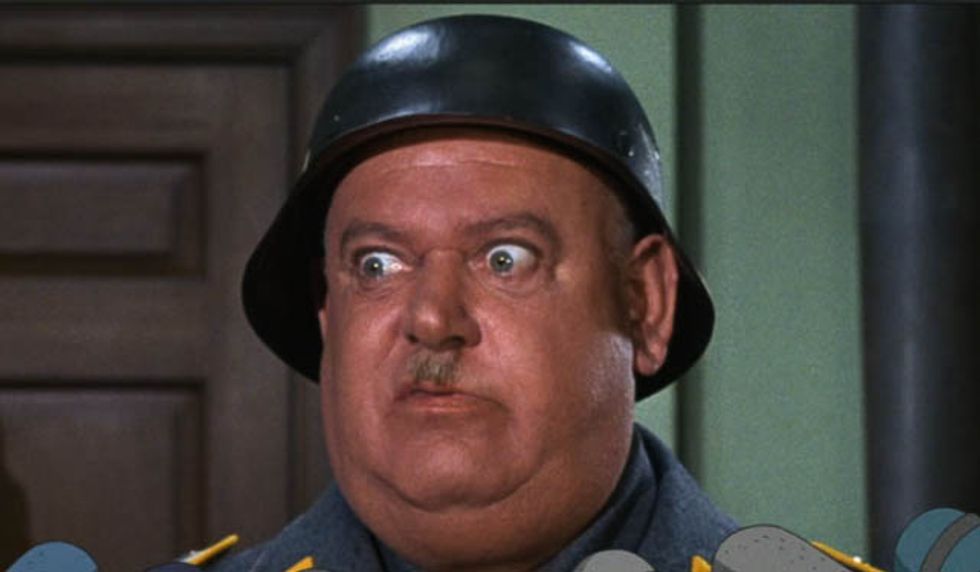 A group of neo-Nazis had to cancel a planned demonstration in the southwest German city of Freiburg Saturday after they mistakenly boarded the wrong train and ended up in Mannheim, a good 123 miles away. Fewer than 20 members of the National Democratic Party (NPD) had been all ready to protest in Freiburg, but police prevented them from getting on the train they wanted because it was already carrying a group of far-left soccer fans on their way to a game, and the police didn't want any riots on the train. (Does the Guardian tell us what city this train was departing from? It does not. This is basic journamalism, chaps.)

Told to take the next train to Freiburg, the superior Aryan intellects instead got on the next train leaving from the same platform without looking at its destination. As luck would have it, when they arrived in Mannheim, they were greeted by members of the International Sad Trombone Association, who happened to be at the station and gave them an impromptu serenade.

Police in Freiburg had advance notice of the planned demonstration and had been prepared to keep the neo-Nazis separate from anti-fascist counter-protesters.

“I don’t know how it happened, but the NPD phoned us up and said they’re not coming, and that they’re on a train to Mannheim,” said [police spokesman Dirk] Klose.

Best line in the whole report: Klose added, "The NPD is now saying they went to Mannheim deliberately." Fiendishly clever, those neo-Nazis!

The NPD had been planning to march in Freiburg in support of a woman who had "allegedly been refused permission to take the final exam for a public management studies qualification because of her allegiance to the NPD." There is obviously no freedom in Germany when they won't let Nazis become public managers. The mayor of Freiburg, Otto Neideck, said "We didn't miss them."

At last report, the Neo-Nazis were attempting to return from Mannheim, but were unable to find their train as they were repeatedly given confusing directions by the stationmaster, identified only as a Mr. Hogan.