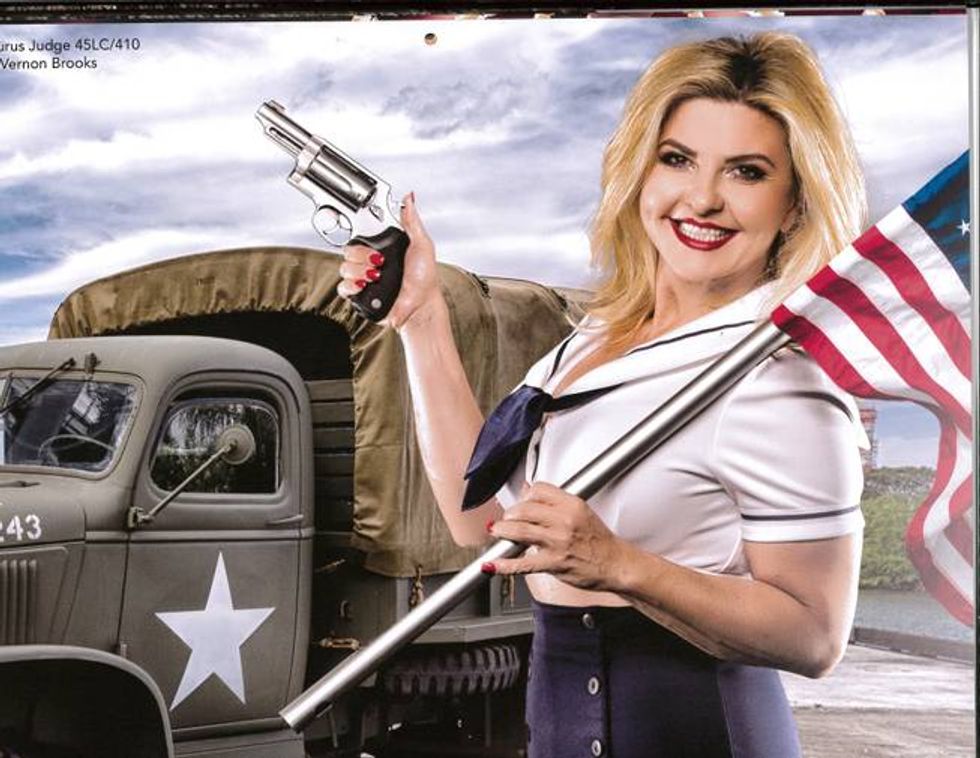 Check out the patriotism on her!

Nevada Assemblywoman Michele Fiore -- and maybe, if we send enough thoughts and prayers to the gods of comedy, the new One-L congresscuckoo in the House of Representatives -- has a plan to win the war on terror. And the war on refugees, since they are one and the same. While stupid Democrats, and Nevada Republicans who are basically like Democrats because they are not as rightwing wackadoodle super-crazy as Fiore, want to roll out the welcome mat for Syrian refugees (except for the opposite of that), Fiore is going to take the fight to them, with her freedombags and her family arsenal of Babies' First Bazookas:

I'm about to fly to Paris and shoot 'em in the head myself! I am not OK with Syrian refugees. I am not OK with terrorists. You know, I'm OK with putting them down. Blacken them out. Just put a piece of brass in their nocular [sic] cavity and end their miserable life. I'm good with that.

Where is the "nocular cavity"? Don't know. Neither does Google. Perhaps it is somewhere near the "nakedness area," a shot to which could be fatal, we assume, if such a cavity actually existed.

Fiore detailed this can't-fail plan during her weekly Saturday radio show, in which she explained that her failure to sign a letter saying STAY OUT, STOOPID SYRIAN REFUGEE TERRORISTS!!!1! was a mere oversight. Of course she hates them! Of course she wants to kill them dead, her own self! Duh, people.

Far be it from us to explain to Fiore the difference between ISIS terrorists and Syrian refugees who are trying to escape the ISIS terrorists. Or how declaring war on refugees and letting our Xenophobic F-You Muslims Freak Flag fly is exactly what ISIS wants us to do because boy is that great for recruitment. We've been o'er that and o'er that enough by now. Besides, should Fiore win election to Congress in 2016, she'll apparently fit right in with all the other elected cowards.

We'd like to think it's obvious, per our Wonkette's Official Editorial Policy on Syrian Refugees, that we also oppose self-appointed patriots jetting off to Paris to murder people, right in their "nocular cavities":

However, given the state of discourse today in this here US of America -- where alleged human beings are openly calling for shooting Muslims, ALL Muslims -- we feel compelled to spell out our opposition to this new nifty terrorist-fightin' plan of randomly murdering OOH SCARY whoevers, just to be clear.