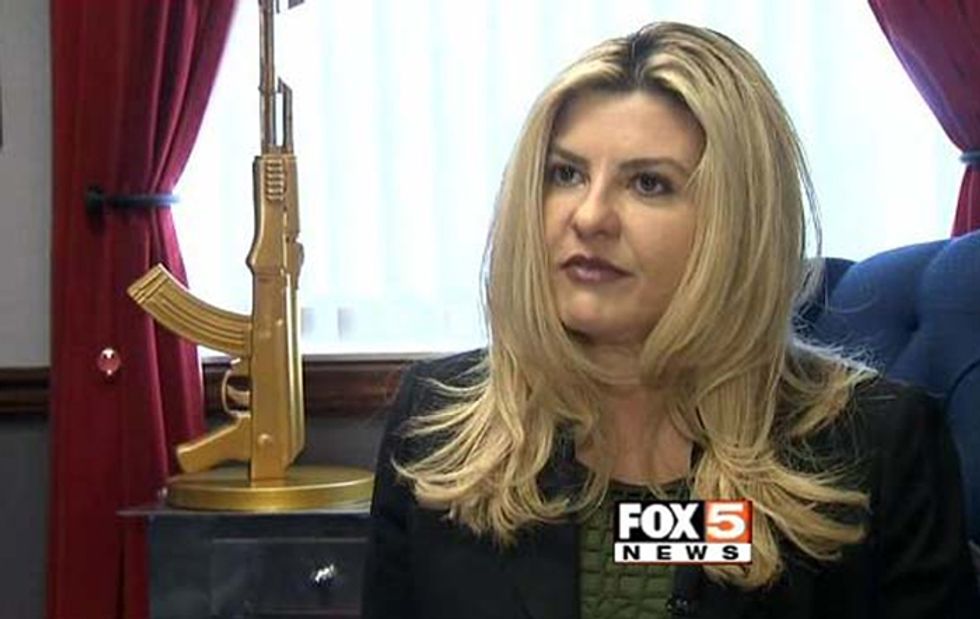 All the classiest offices have Kalashnikov lamps

The Loopy Conspiracy Brigade has found a voice (again) in the person of Nevada State Assemblywoman Michele Fiore, who's calling for studies to determine whether psychiatric medications make people suddenly want to use their freedom-loving semi-automatic weapons to commit massacres. It's a popular talking point with the Alex Jones crowd and like-minded loons, who trot it out after virtually every mass shooting -- often in the same breath that they're insisting there was no shooting at all, and the whole thing was a false flag operation. And who better to spearhead a medical investigation than Fiore, who thinks that cancer is a fungus that can be treated with baking soda?

Fiore first raised the possibility that the killer in the Roseburg shootings may have been all hopped up on Paxil in her idiotic blog post blaming the massacre on "gun-free zones." That was a bit awkward for her, since the Umpqua Community College campus allows concealed carry for permit holders. In that stream of idiocy, Fiore wrote, "This was an act of a criminal who may have been under the influence of mind-altering pharmaceutical drugs." We guess that the "pharmaceutical drugs" are the worst kind of all.

Local TV station KSNV notes that the murderer, Chris Harper-Mercer, "graduated from a school for children with learning and emotional challenges" and that "Oregon law enforcement officials say he was struggling with mental health issues." Obviously, says Fiore, the guy's mental problems must have been caused by whatever pharmaceutical drugs he may have been on, because why else would someone take their home arsenal to a school and start shooting people with it? The TV station helps her lay out her case, such as it is:

Local Republican Assemblywoman Michele Fiore says that while a lot of people want to blame guns for mass shootings, she believes we need to take a look at psychiatric drug treatments prescribed to those struggling with mental illness.

Journalists have learned that the shooter's screen name on social media was "lithium love." Lithium is used as a psychiatric medication.

We don't know if the shooter was on any prescribed medication, but that's no reason not to investigate their effectiveness, says Fiore:

"We have to look into what is being prescribed and what is in these meds just like clinical studies," Fiore told News 3 this weekend. "Why don't we do studies on the medication all of these shooters were taking and take that medication off the market?

"Obviously, medications can alter your mind just as alcohol can alter the mind," she said.

A lot of the nonsense about psychiatric meds turning people into irrational murder machines comes from our pals at the "Citizens Commission On Human Rights International," a Scientology front that claims psychiatry is responsible for every possible social ill, and runs a bogus museum in Los Angeles with the cheerful name “Psychiatry: An Industry of Death.” It tells you a lot that among the top promoters of the claim is the quack website "Natural News," which is so consistently full of shit that if it advocated daily hydration as necessary for life, we'd at least think twice before drinking our next glass of water. Other fans of blaming psych meds for mass shootings include our BFF (Best Frenemy Forever) Bradlee Dean, who thinks kids are overmedicated and we need to beat the violence out of them with the Rod of Correction. Hope he doesn't sue us again for accurately quoting him on that.

Following the June murders of two reporters in Virginia, the claim that "every mass murderer has been on psychiatric meds" made the usual internet rounds again, and was addressed quite nicely in this article at Psychology Today by Joe Pierre, MD, who points out that the claim itself is dubious, let alone the assumption of a causal link:

Looking more broadly at the claim that "every" or even "most" mass murderers were on psychiatric medications, where's the actual evidence that this is true? In the vast majority of cases, we don't have access to their medical records and we certainly don't know if the medications, even if prescribed or otherwise obtained, were actually being taken. [...]

And then, of course, there's the issue of correlation vs. causality. After all, I'm fairly certain all known mass murderers were drinkers of tap water, which has also been linked to violent outbursts.

Still, we're happy that Michele Fiore has jumped on the "psych meds cause mass murders" bandwagon, and we'd even support more research on the topic, if only to lay the myth to rest once and for all. You know, just like science has proven to wingnuts' satisfaction that global warming is real and vaccines don't cause autism.