New CBO Report: Nobody Knew Killing Healthcare Was So Complicated! 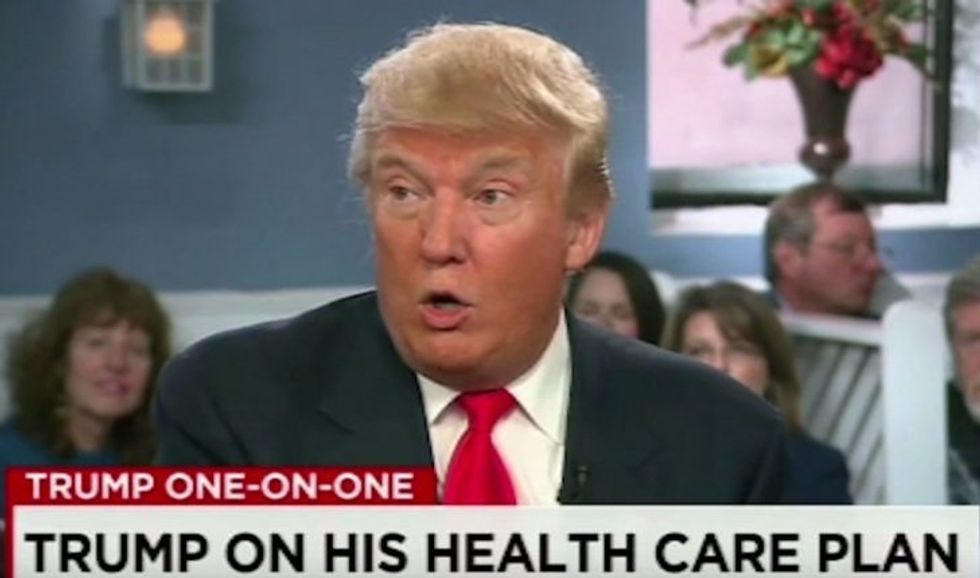 Nancy Pelosi asked the Congressional Budget Office to do an analysis of what would happen if Donald Trump were to follow through on his threat to withhold government payments to insurance companies that make it possible for lower-income folks to afford health insurance with the Affordable Care Act. That analysis was released yesterday, and while it wouldn't actually kill Obamacare, it would make insurance on the individual exchanges a lot more costly, with premiums going up sharply. And in some sad news for the greatest deal-maker ever, withholding the payments wouldn't save the government money; it would actually cost about $200 billion. If that sounds nuts, it's because Donald Trump is really very, very bad at killing Obamacare.

The premium subsidies are tethered to how much Obamacare enrollees earn. They cap how much a given enrollee is expected to spend on his or her monthly premiums. Someone who earns 200 percent of the poverty line, for example, is expected to pay 6.4 percent of her income on premiums to purchase a midlevel plan. The government kicks in the rest.

CBO says the loss of the CSR payments would force insurance companies to raise premiums on "silver" plans about 20% right away, and more in later years. This is where the tax credits -- which the president can't unilaterally end the way he can the CSRs -- would become a big factor. Since those credits kick in to ensure lower-income policyholders don't have to pay more than a given percentage of their income -- you know, the affordable thing -- the government would pick up the bulk of the increased premium costs for most folks, resulting in about $194 billion extra in new subsidies. Bummer for Donald Trump: If he chops the CSR payments (which he misleadingly calls a "bailout for insurance companies), he'll end up costing the government a lot MORE to pay for ACA insurance. Kliff sums it up pretty succinctly:

Oh, yes, and while Trump hopes ending the CSRs would cause Obamacare to "implode" -- you know, because it would anyway, he'd just give it a little push -- the CBO report actually forecasts that wouldn't happen either. Insurance would get a lot more expensive for people who make too much to qualify for subsidies, and subsidizing the higher premium costs with locked-in tax credits would result in higher deficits. The disappearance of CSR subsidies would result in some short-term market chaos, with about 5 percent of Americans living in areas with no plans available at all on the exchanges "because of substantial uncertainty about the effects of the policy," but no implosion or death spiral, at least not according to CBO's projections. Things would be unsettled in 2018-2019, but after insurance companies figure out how their rates would need to be restructured, the individual market would stabilize:

By 2020, though, insurers would have observed the operation of markets in many areas under the policy and CBO and JCT expect that more insurers would participate, so people in almost all areas would be able to buy nongroup insurance[.]

Further, the report says that while some people would choose not to buy insurance at all, the overall uninsured rate would actually go down because the increased subsidy payments would lead to about a million more people being insured by 2020. In other words, eliminating the CSRs would make premiums jump, but the built-in protections of the tax subsidies would shield most individual policyholders -- it would just cost a hell of a lot more for the government. You'd almost get the impression the ACA was designed to be fairly robust or something. A year of hearings, input from stakeholders, and debate probably helped there.

Are You Ready For Obamacare Open Enrollment? The Trump Administration Sure As Hell Isn't.

With open enrollment for 2018's starting in under three months, Team Trump has no idea what it's doing. See, government healthcare doesn't work!

The anti-Obamacare propaganda is coming from INSIDE THE HHS!

If Trump wanted to save money, he wouldn't fuck with the CSRs, but he might do it anyway out of spite, because anything that adds more chaos into the system helps him insist the ACA is failing. Also, the CBO estimate only looks at the effects of ending Cost Sharing Reduction subsidies, and assumes the ACA would continue to be administered normally otherwise. But Trump and his crew, especially HHS secretary Tom Price and his merry band of healthcare vandals, are actively working to undermine the program through all sorts of administrative fuckery in hopes of making it fail.

Yr Wonkette is supported by reader donations. Please subsidize our premiums by clicking that "Donate" linky there.