New Crime To Worry About: Sitting While Black 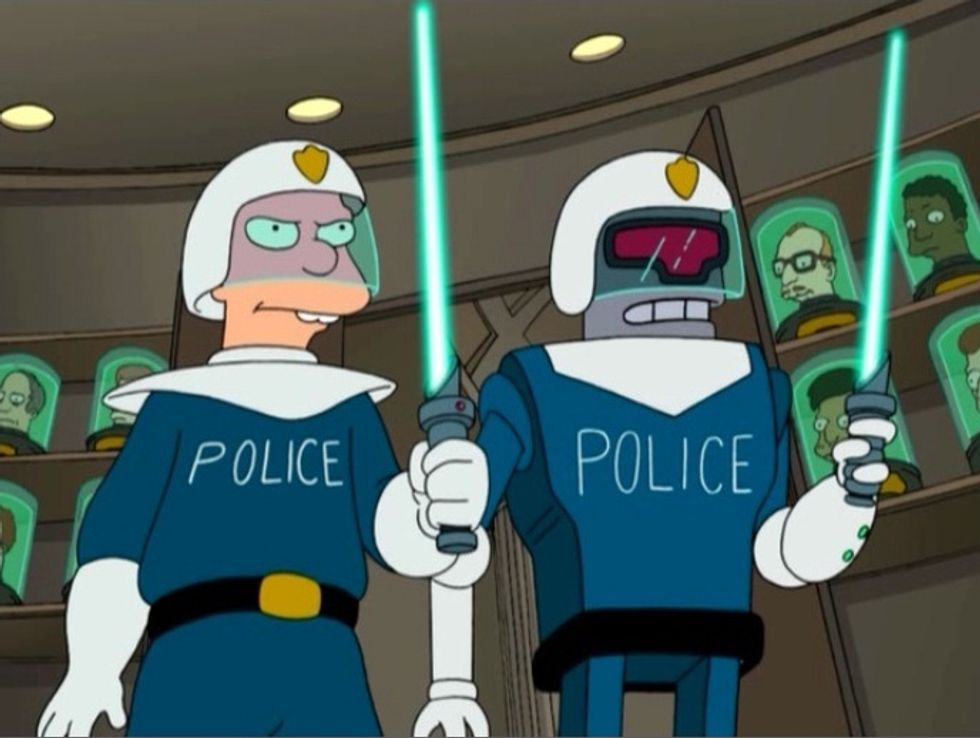 In yet another completely isolated incident that has nothing to do with race, another black man has released a video of police going to town on him for being an uncooperative ne'er do well. In this case, the unruly offender is Christopher Lollie of St. Paul, Minnesota, who on Jan. 31 of this year was waiting to pick his kids up from daycare when confronted by a cop who wanted to know his name and why he was sitting down on a chair in a skyway in between two buildings. Like a troublemaker, he seemed to think he had the right to not give his name and ID to a police officer without her telling him what he'd done wrong -- and then what he'd done wrong was to not comply with her "Papers, please" request, which marked him as a probable criminal threat with dreadlocks.

Lollie told the Star-Tribune that he had been asked to leave the seating area after about two minutes by a security guard, but that he believed himself to be in a public area:

“I was just sitting down,” Lollie said Thursday. “He wanted me to move out of that area because I didn’t look like someone he wanted to sit in that area. … I was completely within my rights to sit there.”

See, this is why we have unrest. People just won't behave. Lollie admits that he ignored a perfectly legitimate order from what Ben Stein would consider an officer of the law, and remained seated for a full 10 minutes in an area that was absolutely private, but which was open to the skyway and didn't have any signage indicating that it was reserved. But you know how The Blacks are, thinking they have rights and stuff. When the cops arrived, Lollie began recording, which is pretty convenient, too; if he were an honest person, he'd have recorded his entire day so we could know what he'd done to bring down all this trouble on himself.

The recording shows Lollie politely refusing to identify himself and repeatedly asking what offense he was suspected of, and the officer repeatedly asking him for his ID. When another officer arrives, things get rapidly worse, because of course now Lollie is defying TWO cops, one of whom he insults by calling him a very black term:

“The problem was --” the female officer begins.

“The problem is I’m black,” the man fires back. “It really is, because I’m not sitting there with a group of people. I’m sitting there by myself. By myself, not causing a problem.”

Eventually a second male officer approaches the man in the video and attempts to restrain him.

“I’ve got to go get my kids,” the man tells the second officer, pulling his arm away. “Please don’t touch me.”

“You’re going to go to jail then,” the second officer says.

“I’m not doing anything wrong,” the man replies.

At this point, both officers grab the man.

“Come on brother,” the man says, “This is assault.”

“I’m not your brother,” the second officer replies. “Put your hands behind your back otherwise it’s going to get ugly.”

When Lollie refuses to put his hands behind his back, still insisting like a guilty person that he's done nothing wrong, the cops rush to pin him, and he drops his phone; the video goes black, but the audio continues to record, and we hear Lollie scream as he gets tased for being so damned difficult and resisting. Just before he's tased, at the 2-minute mark, you can also hear children crying as Lollie says, "That's my kids right there," which just goes to show the lengths to which he was out of control, making the cops tase him right in front of his children.

Unlike virtually every other black male suspect who's videotaped his own arrest, Lollie at least had the good sense not to be accused by the officers of grabbing for their guns, so you'd think he'd be a lot more grateful that he wasn't shot to death.

The police report, of course, explains that Lollie was dangerous and out of control:

Police wrote in a report that Lollie was "actively resisting by attempting to pull his arm away" and "began to forcefully try to shove past us as he was pulling away from us." An officer pushed Lollie against a wall to try to control him and Lollie accused the officer of trying to choke him, the report said.

"Several times I attempted to force his hands behind his back but was unable to overcome his active resistance," the report said. When Lollie's "resistance was becoming uncontrollable," an officer used a Taser on him, the report said.

It's a tragic story of life in Obama's America. If only Lollie had just followed orders from his betters, this all could have been avoided. Instead, he was charged with "trespassing, disorderly conduct and obstructing legal process," although the charges were dropped after Lollie appeared in court with an attorney and provided "surveillance video from the skyway and witness statements." Just for safekeeping, police held his cellphone for six months "as evidence," and it was mighty nice of them not to erase the video, which Lollie posted to YouTube earlier this week. The legal brain trust of YouTube commenters were quick to note that the hysterical black man was awfully quick to play the race card, and so he needed a good tasing. And wouldn't you know it, like so many troublemakers, he intends to file a complaint with the police department and is considering a lawsuit, just over a little thing like a possible civil rights violation.

The St. Paul Pioneer Press spoke to Dave Titus, the president of the St. Paul Police Federation, who explained that the three officers involved -- Michael Johnson, Bruce Schmidt and Lori Hayne (who has since retired) -- were the kindest, bravest, warmest, most wonderful human beings ever to wear blue:

"These three cops in the skyway, you couldn't get nicer individuals. This guy was acting like a jerk."

At The Atlantic, criminal-enabler Conor Friedersdorf notes that Mr. Lollie actually was correct about the law, as if that had any bearing on the fact that he was being flagrantly black in public:

Lollie is also absolutely correct that no law required him to show an ID to police officers. As Flex Your Rights explains, "Police can never compel you to identify yourself without reasonable suspicion to believe you’re involved in illegal activity," and while 24 states have passed "stop and identify" statutes "requiring citizens to reveal their identity when officers have reasonable suspicion to believe criminal activity may be taking place," Minnesota isn't one of those states.

Yr Wonkette would like all our readers to know that simply having the "right" to be treated as a "human" can get you into a lot of trouble, and so it's best to go quietly, answer all questions, assume the position, and just admit what you did. You definitely did something, and they'll find out what it was one way or another.