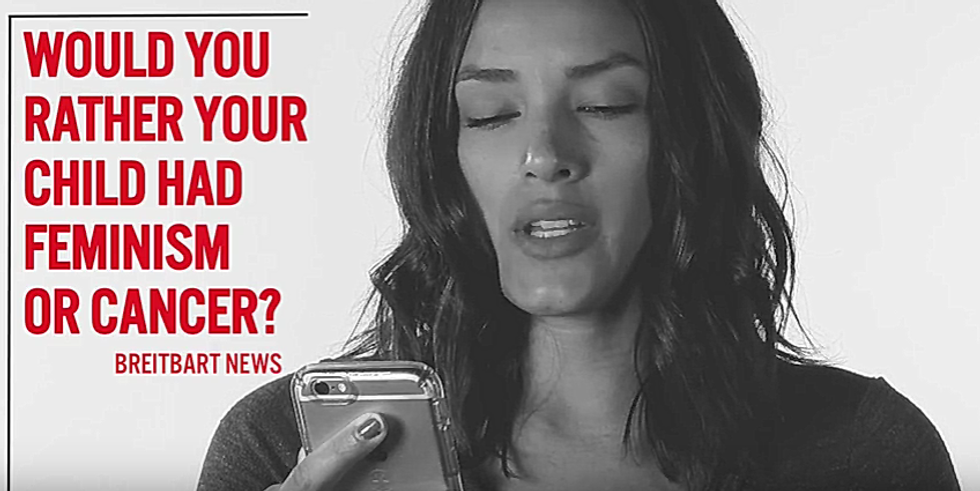 One of our favorite things about Donald Trump's nonexistent "pivot" from the primaries to the general election is that, for somebody who thinks he's such a salesman, he sure doesn't know the first thing about his target audience. Oh, the toilet-water-drinking heathens who made up Trump's base during the primaries absolutely love racist, homophobic shit like Breitbart dot com, but normal people in the general populace? Nah. Urban moderate Republicans who can't believe Trump is literally their party's choice for president? Fuck no, they read the Wall Street Journal and listen to NPR, occasionally stopping to tut-tut at the silly liberals on the other side of the radio waves. They do not read Breitbart.

[wonkbar]<a href="http://wonkette.com/605607/donald-trump-hires-breitbart-dude-to-fix-campaign-so-he-can-win-even-more"></a>[/wonkbar]So when Stephen Bannon stepped aside as head of Breitbart News to be Donald Trump's new Work Wife, the Democrats obviously saw an opportunity. "Holy LOLs, y'all!" they must have said to each other. "Breitbart is literally the racist, spittle-flecked underbelly of the entire right wing internet, but we bet a lot of normal people out there have no fuckin' idea what it is, or how utterly terrible it is. We should tell them about Breitbart!" That is probably how that conversation went. And thus a political ad was born!

Wonkette already featured some of Breitbart's worst headlines in a recent post, but here is the Democrats' Fancy Dan new ad, all tied up in a bow. Watch it while you drink whatever cocktails you people drink on Wednesday mornings!

Wasn't that nice? So which headline do you think will play the best with the vaguely Republican mom who's taking her daughter Madison and her gay son Trevor to H & M this afternoon because there is a big sale? "Trump: Hard For Women To Attack Me On Looks Because I'm So Good Looking"? Republican Mom (we'll call her "Debra") probably would get a good giggle from that one! And we bet gay son Trevor, who is voting in his VERY FIRST ELECTION this year, really loves the "Dear Straight People: I'm Officially Giving You Permission To Say Gay, Fag**t, and Qu**r" one.

How about the female president of the college Republicans who really wanted a chance to vote for John Kasich, but found the rest of the GOP possibilities this year utterly unacceptable -- do you think she'd like the "Would You Rather Your Child Had Feminism Or Cancer" one? Ooh, ooh, we bet parents of actual children with cancer would make a political donation after they see that one -- to Hillary Clinton's campaign.

So, which is YOUR personal favorite disgusting, racist, homophobic, misogynistic Breitbart headline, the one that would make you want to get on the Trump Train, for real? Feel free to discuss in the comments, which are not allowed.