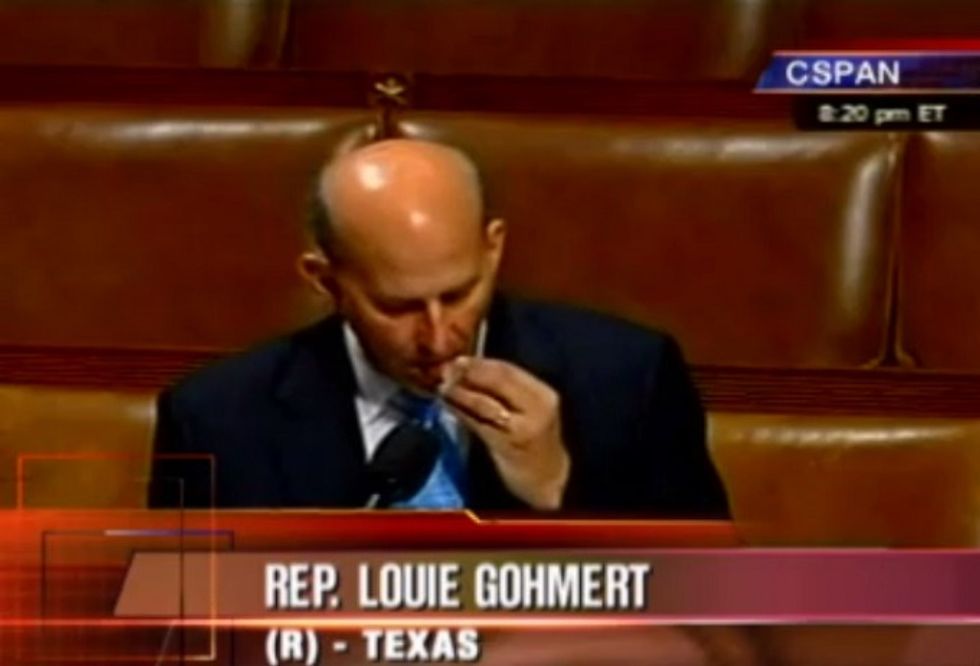 Texas congressman and casual House-floor snacker Louie Gohmert delivered blessed news to the nation on the first Sunday of the new year: he will finally rise to be the savior America needs by defeating John Boehner to become the new Speaker of the House.

The prospect of a tea party coup to knock off Boehner is nothing new, but this time Louie doesn't seem content to just send a message. In 2013, seven non-Boehners received a total of nine votes, and they were all fringe types, certainly not in the same league as Louie! And yes, Rep. Ted Yoho of Florida pulled a Jeb this weekend, becoming the first to announce he'd be "willing to serve" as speaker instead of Boehner, but Ted Yoho poses no threat to Louie Gohmert, except possibly in a Most Appropriate Name In Congress competition.

During his satellite appearance with Tucker Carlson on Fox & Friends Weekend, Louie said that the stodgy old guard of the GOP should stop crying about the possibility that Nancy Pelosi could snatch back the gavel if too many Republicans split from Boehner. According to Louie's math, that would never happen, and instead Boehner would be forced to defend himself through multiple rounds of voting and eventually be taken down by another Republican over his betrayal of the party by agreeing with Obama that one time.

Unlike what some of the establishment people are saying that, gee, if anybody votes for a candidate besides Boehner on the floor, that Pelosi could win. That's hogwash. The rules are you have to get a majority of all those votes cast for an eligible person, which is any adult American citizen. So there's no chance of Pelosi winning as long as 59 Republicans don't vote "present." If they vote for a person, whether it's me, Ted Yoho, or anybody else that gets in between now and Tuesday, and we have 29 people vote for somebody besides Speaker Boehner, then we get to a second round or a third round and eventually the goal is, second, third, fourth round, we have enough people that say, you know what, it really is time for a change. You deceived us when you went to Obama and Pelosi to get your votes on the Cromnibus. You said you'd fight amnesty -- you didn't. You funded it. You took the only hostage that Obama would like for us to shoot.

Imagine the drama -- as the balloting goes on, Boehner's allies start to fall away and join Gohmert's GOPurity brigade. Once the old empire has crumbled and white smoke has puffed from the Speaker's balcony to signal the selection of a new leader, how would a Gohmert speakership change everything that's wrong with Congress?

First of all, we will fight amnesty tooth and nail. We will use the powers of the purse. We will have better oversight. We will fight to defund Obamacare and we have positive solutions, and Paul Ryan and I are very similar on this -- health savings accounts. We've got solutions that will return the power to the people, to the doctor-patient relationship again. We'll get back to regular order. In 2010, Boehner and other leaders said if you put us in the majority, we will have time to read the bills. That hasn't happened. We saw that with the Cromnibus again. If I'm speaker, there will be plenty of time to read the bills. We'll get back to appropriating and we will go through regular committee process so everybody, every representative from both parties, will have a chance to participate in the process and not have a dictator running things, deciding who's the chairman of what committee, which bills come to the floor. It will be regular order so people can participate and have their representatives represent them.

[contextly_sidebar id="fgapn40CGUYHtrbzaJiUW0SDg9cjt02O"]And as always happens to people rescuing an entire nation from a dictator, Gohmert will be welcomed as a liberator. He will be showered with candy as he ushers in a fresh era of transparency and fidelity to conservative values, and never again will anyone cast aspersions on his asparagus.

New King Louie imparted a bit of information that was both true and relevant during his chat with Tucker: the Speaker of the House of Representatives is not required to be an elected member of that body. In the 2013 speaker's election Gohmert voted for Allen West, who had just lost his seat in the House after a single term.

[contextly_sidebar id="rA416nc3eciEK22Sxg1piny0sg2ONNic"] We therefore challenge the House Republicans who are determined to unseat Boehner: institute some truly fresh leadership. While a Speaker Gohmert would no doubt be a boon for our portfolio, given our short sales on lofty rhetoric and arithmetic-based budgeting, we think the country might be better off if they pick the brightest, scrappiest intern from each of their offices and lock them in the cloakroom until one emerges ready to make history.