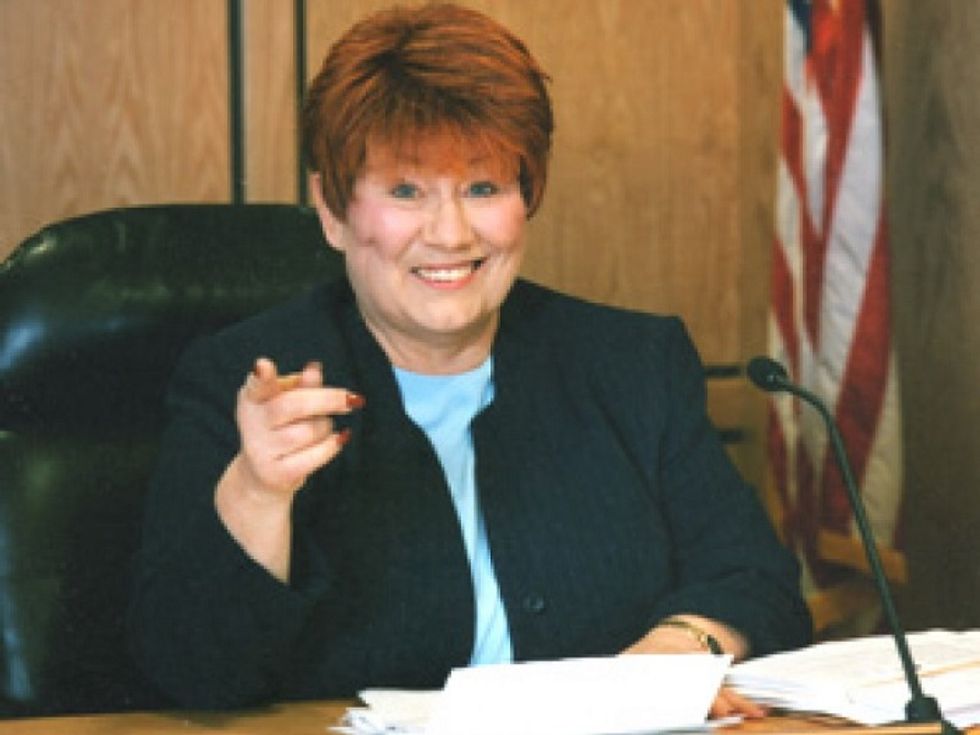 A town council meeting in Mahwah, New Jersey, turned ugly last Thursday as the Council reacted with both pique and indelicacy to ... we don't know, some horseshit that small-town people get het-freakin'-up about. We do know Councilwoman Lisa DiGiulio let out her inner Scalia with all manner of bawdy gestures and a Tony Soprano-style gutter mouth full of terrible cusses, impeach.

According to Patch, we guess, the sadly fisticuffless contretemps stemmed from the mayor's recent firing of the Director of Public Works. The Council voted unanimously to reinstate DPW head Ed Sinclair, after which the assembled townsfolk were treated to a show:

Councilwoman H. Lisa DiGiulio drew applause from residents last week after she flashed both middle fingers at the Mahwah mayor, and called him a “piece of [expletive]” during an intense township council meeting.

Mayor Bill Laforet had fired Sinclair earlier in March after an anonymous letter alleged that "inappropriate material" had been regularly viewed on DPW computers. This didn't go over so well, seeing as how Sinclair had run against Laforet in the last mayoral election, and years of political acrimony apparently spilled over into the Council meeting, culminating in Sinclair's reinstatement and a vote of "no confidence" against Laforet.

At the time of the firing, Sinclair wasn't accused of actually viewing any "inappropriate materials" himself, but took the fall because, as Laforet said in a statement, "As department head, Mr. Sinclair was responsible for the oversight and management of the Public Works."

The council meeting was packed with Sinclair supporters, who were united in their opinion that Laforet was a terrible horrible no-good very bad man:

The first to voice their concern was Sinclair’s wife, Jackie, who called the firing ”political retaliation and a witch hunt.”

Sinclair’s wife told the Council that when her husband and Laforet ran against each other, Sinclair chose to run a clean campaign and not hurt Laforet’s family - despite being told he should use the information that he knew.

But the woman said that Laforet has done the same thing Sinclair vowed not to do: hurt his family.

“That for me is unforgivable,” she said.

Mahwah Patch reporter Natalie Mieles didn't specify what Mrs. Sinclair alleged Laforet had done to hurt Sinclair's family; we're assuming maybe it was a pipe bomb, a slanderous allegation of illegal activities by a distant cousin, or perhaps uncomplimentary remarks about the ugly garden gnomes in the Sinclairs' front yard.

Sinclair's sister also spoke, calling attention to her brother's many volunteer activities and adding that "no one should go through what he’s gone through in the last two weeks." Again, the details were vague -- possibly waterboarding, possibly severe indigestion. But the parade of angry denunciations did not stop there, no they did not!

“You should be ashamed,” the resident told Laforet. “You ruined the township of Mahwah.”

Strong words indeed! It wasn't entirely clear why the New York man was even there; perhaps he just heard the noise and stopped in to see what the fuss was about.

Councilwoman DiGiulio's dual-bird-flipping was provoked by Mayor Laforet's suggestion that she should recuse herself from the Council's closed-session deliberations on l'affair Sinclair:

DiGiulio got out of her seat and addressed the audience as she called Laforet ”a piece of [expletive]” for bringing in a political poster featuring her alongside Sinclair and others. The mayor indicated it would be a conflict of interest if she voted to reinstate him during a closed session.

The crowd cheered and DiGiulio went back to her seat, but not before giving the mayor not one, but two middle fingers.

Councilman Robert Hermansen was especially vitriolic in his condemnations of Laforet, saying he had a "despicable nature” and that he was both “disgusted” and “shocked” by the dismissal of Sinclair. "That man has no right to be the mayor of this town,” Hermansen added, although one might suppose that Laforet's having won the election may well have played some role in Laforet's inexplicable hold on the reins of power in the community of 25,000 souls.

Following the meeting, an unchastened Laforet stood by his decision to fire Sinclair, saying that an investigation had found "evidence that inappropriate material was being viewed over a prolonged period of time in the DPW,” and calling the Council's vote to reinstate Sinclair "a slap in the face to the taxpayers of Mahwah” and “a poor message to send to other employees of this town.”

As outsiders, we can only speculate what may happen next, but we wouldn't be the least bit surprised if this conflict escalates, possibly to the point where cars' paint jobs get keyed, longtime neighbors stop speaking to each other, and small yappy dogs are encouraged to poop in political rivals' lawns. Should tensions in the town become more inflamed, Mahwah may well risk its status as the ninth-best place to live in New Jersey, as determined by New Jersey Monthly in 2008.

It is not yet known whether Jimmy Carter will be available to mediate.