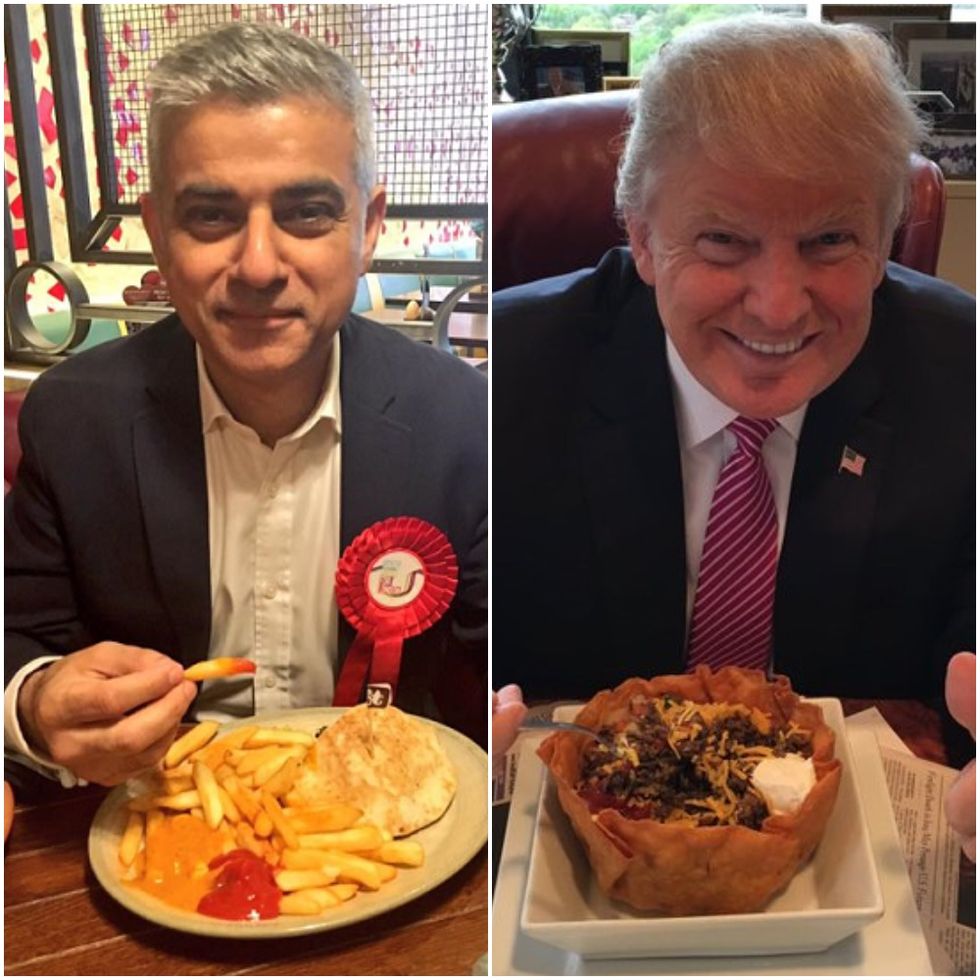 HOW ARE THEY NOT ALREADY PALS?

Know that thing about how one side of Donald Trump's apple-headed vagina mouth is a xenophobic racist who wants to deport all the Muslims and the Mexicans, even if they are Americans, and even wants to ban all Muslims from entering America? But then the other side of his mouth is all about how he loves the Hispanics and the other minorities, he will make great deals, and he gets along with everybody, because he's so yoooge?

[wonkbar]<a href="http://wonkette.com/601590/london-has-a-new-muslim-mayor-and-the-stupidest-man-on-internet-is-on-it"></a>[/wonkbar]Funny thing! The new mayor of London, Sadiq Khan, who is a verified Muslim, is apparently not interested in being buddies with Donald Trump, even though Trump totally said he could be the "exception" to the Muslim ban. Aw, c'mon, Sadiq Khan, why you ain't wanna be Trump's token boy?

Khan accused Trump of having an “ignorant view of Islam” that could make Britain and the US less safe. “This isn’t just about me,” said Khan, after Trump suggested he might allow the new mayor into the US if he becomes president. “It’s about my friends, my family, and everyone who comes from a background similar to mine, anywhere in the world.”

The mayor of London made the comments after Trump told the New York Times “there will always be exceptions” when asked about how Khan would be affected by the ban. The Republican businessman added that he was “happy” that Khan had been elected.

How is that not good enough? Here's Donald Trump saying Khan could be a really tremendous, terrific, elegant mayor of London, and that they could totally forget about all that "ew gross Muslim" stuff, because, you know, he's the mayor of London. They could golf at the Mar-A-Lago, WOULDN'T THAT BE NICE? Just Trump and his Muslim pal, being pals! And all Khan has to do is leave all his friends and family back in the UK when he wants to go visit America, because you never know who they are.

[wonkbar]<a href="http://wonkette.com/596626/president-donald-trump-will-kill-americas-heroes-dead"></a>[/wonkbar]Oh, and Khan better hope he doesn't ever end up having a sister who knows a dude who buys melons from a dude who met a lady one time on the bus whose grandmother sexed a guy once who had a falafel cart where one time a guy who was a ISIS bought falafel. Because then he might fall under scrutiny under Trump's plan to "take out [the] families" of suspected terrorists, even if they are bona fide American heroes, or even mayors of worldwide financial centers like London.

Khan does want to visit America pretty soon, but not to see Donald Trump, according to an interview he gave to Time. He wants to meet with other mayors and trade ideas about how to Make London Great Again, or whatever mayors do when they chit-chat. And from the way he, who is a Muslim, talks about how to handle problems of extremism and radicalization in western societies, we are guessing he and Trump wouldn't have much in common anyway:

What I think the election showed was that actually there is no clash of civilization between Islam and the West. I am the West, I am a Londoner, I’m British, I’m of Islamic faith, Asian origin, Pakistan heritage, so whether it’s [ISIS] or these others who want to destroy our way of life and talk about the West, they’re talking about me. What better antidote to the hatred they spew than someone like me being in this position?

LAME, he didn't even talking about bombing the shit out of ISIS.

In all seriousness, Sadiq Khan sounds pretty great, and we hope he will have a great time coming to America when our next president, whose name will never be "Donald Trump," is elected.