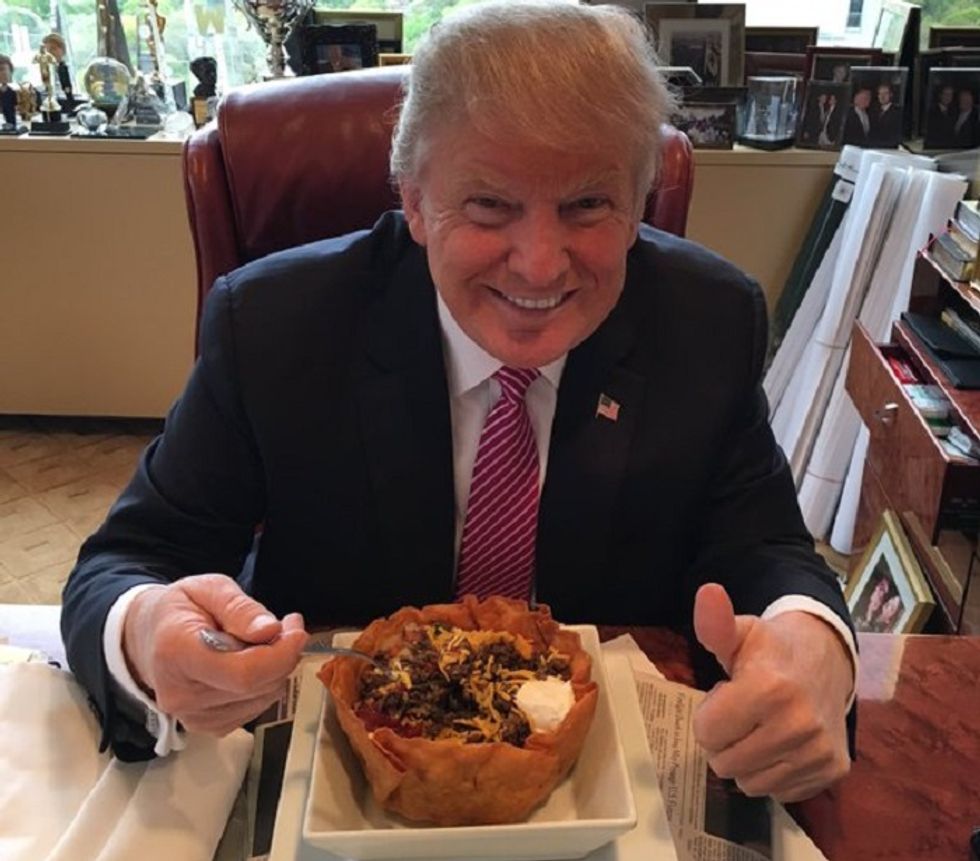 Trump gets the taco bowl, waitstaff get the shit sandwich

The Trump administration's obsession with overturning every last vestige of the Obama presidency continues apace, with a rule change announced this week by the Labor Department. The new rules would allow restaurants to force waitstaff, bartenders, bussers, and other tipped employees making more than minimum wage to pool their tips, to be shared with kitchen staff, dishwashers, and others who don't work in public-facing, tipped jobs. Or maybe the pooled tips could go to the restaurant managers/owners, as long as everyone in the restaurant is paid at least the federal minimum wage of $7.25 an hour. Yes, really, this is a thing.

The department frames this as a matter of "fairness," you see:

“These ‘back of the house’ employees contribute to the overall customer experience, but may receive less compensation than their traditionally tipped co-workers,” the department said.

Federal labor laws have prohibited tip-pooling for employees who receive less than minimum wage, under the assumption that tips would bring workers up to at least an average of minimum wage. The Obama administration put in place a regulation in 2011 saying that all tips belong to the individual employee, regardless of base pay. Trump's Labor Department wants to eliminate that rule, and wouldn't you know it, restaurant industry types are delighted by the change:

“We applaud the Department of Labor’s review of tip regulations,” said Angelo Amador, executive director of the Restaurant Law Center, in a statement. “We look forward to submitting comments from the restaurant industry on the new rulemaking.”

Unions and worker advocates warn that the change would make it legal for employers to simply take the tips and add them to their profits, because of course they'd do that, the rat bastards. Heidi Shierholz, a senior economist for the Economic Policy Institute, isn't a fan of the proposed rule change:

“This would be a big transfer of money from workers to employers,” said Shierholz, who previously worked for Obama’s Labor Department. “The restaurant industry has wanted this forever. They want to be able to capture tips.”

You think? You might almost get the impression that Donald Trump doesn't give two shits for workers, which is a complete surprise for a guy whose first nominee for Labor secretary loved the idea of replacing fast food staff with robots, who raided casino employees' retirement accounts, who tried to bust a union organizing drive at his Las Vegas hotel (and failed, yay!), and who was -- big surprise -- sued for stealing employees' tips at his Trump Soho luxury hotel.

As The Takeout notes, this regulation would legalize an already notorious problem in the restaurant business:

The Economic Policy Institute finds that this form of wage theft is common, costing workers $8 billion annually. That’s an average of $3,300 to a year-round worker who is likely already among some of the lowest-paid employees in the country. The EPI goes on to say that servers and bartenders are much more vulnerable to wage theft than other types of workers.

And while waitstaff in upscale restaurants can get tips that average out, with wages, to a pay rate of as much as $20 an hour, most get far less -- Bureau of Labor Statistics figures indicate the average wage for servers is $9.61, while dishwashers and bartenders get an average of $10 an hour.

A lawyer for the National Restaurant Association, Paul DeCamp -- who also worked in the Labor Department under Bush II -- pushed tip pooling as a matter of simple equality:

Hmm... sounds like wealth redistribution to us. DeCamp also reassured WaPo that restaurateurs would never dream of pocketing servers' tips for themselves, because the Invisible Hand of the Free Market wouldn't let that happen:

Or if you legalize theft of tips, you'll soon have an industry where waitstaff will be told they're getting paid plenty, the law says the management can pocket the tips, and if the servers don't like it there's always somebody willing to work the same job for less pay. And maybe the way to deal with that disparity between staff pay rates would be to pay kitchen staff more? We know, we're commie dreamers.

As The Takeout explains, even prominent restaurateurs have been sued for tip theft,

including Charlie Trotter,Mario Batali, and the owners of Zahav. If the proposed Department of Labor changes are enacted, this all-too-common practice would be completely legal.

Before this suckass rule can go into effect, there is a mandatory public comment period; information on how to comment is here, the comment portal itself is right here (read the how-to comment document first), and for completeness nerds, the full text of the rule change is here.

Tipping is a stupid practice that most civilized countries have gotten rid of in favor of paying decent wages. This rule is aimed at the worst of both worlds: low pay for restaurant staff, and a loophole to let management take the tips that will still be given. Fuck these bastards, give them an earful. Politely, of course.

Yr Wonkette is supported by reader donations. Please click here to pay our wages, and try the veal.