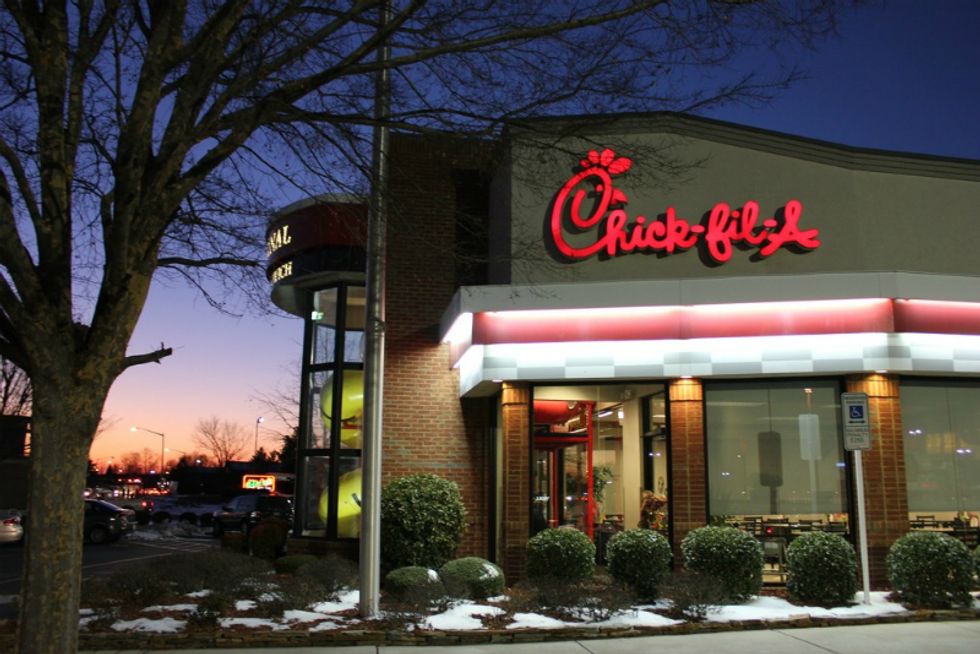 If there's a politician in America more likely than New York Mayor Bill de Blasio to make perfectly reasonable comments only to have wingnuts immediately and epically lose their minds, we're not sure who it is. (Just kidding, it is Hillary Clinton and also Barack Obama and also pretty much every Democrat, but mostly those two.)

Numerous Democratic mayors said really stupid shit about the encroachment of Chick-Fil-A into their cities back in 2012, when the marriage equality controversy first broke. Former Boston Mayor Thomas Menino and somehow still-current Chicago Mayor Rahm Emanuel both straight up said they would block Chick-Fil-A from expanding to their respective cities. In Emanuel's case, the Illinois ACLU even opposed his potential ban on the extremely reasonable grounds that banning an organization because their owner doesn't approve of marriage equality opens the door to municipalities banning other organizations just because their owners are in favor of gay marriage. (Rahm Emanuel in trouble with the ACLU? COLOR US SHOCKED!)

De Blasio, though, isn't calling for anything so problematic; he's simply been suggesting New Yorkers who support LGBT rights should boycott the chain. He even freely acknowledges that "they have a legal right" to operate wherever.

Apparently, however, once you run "I wouldn't urge anyone to patronize them, and I won't eat there, but they have the right to establish businesses" through a wingnut rage translator, it becomes "I AM THE HARBINGER OF THE MORAL DECAY OF AMERICAN SOCIETY, EVERYBODY GO HAVE BUTTSEX AT CHICK-FIL-A AND EJACULATE IN THE NUGGETS." That's the only explanation we can come up with for the batshit froth conservative commentators have worked themselves into over this. Here's Franklin Graham in a Facebook post about de Blasio's high crimes against decency:

Can you imagine a city where a popular, successful business is singled out and attacked by the mayor who calls for a boycott — all because the business owners let it be known that they operate by Christian principles and believe in God’s definition of marriage? You don’t have to imagine. That’s exactly what just happened to one of America’s most successful businesses. [...]

They just opened a new store in New York and Mayor De Blasio took the gloves off and came after them, calling for a boycott. Doesn't this sound like bullying, intolerance, and discrimination?

Not to anyone with more brain cells than teeth, Franklin, no, it does not.

Franklin Graham isn't the only one in a tiff over de Blasio's attempted cockblocking; we're also treated to further words of wisdom from our old friend, suspected pee enthusiast and frequent Fox News stool pigeon Todd Starnes. No shock Starnes would get involved here; as you all remember, he likes to touch himself while thinking about hot buttery buns. Let's see what Starnes had to say about the issue, courtesy of his steaming, asparagus-scented stream of consciousness:

Goddamit, Todd, do you need some time in your bunk? Because we can totally leave and come back if you -- oh, nope, you're just going to whip it out right here. Fuck.

“What the ownership of Chick-fil-A has said is wrong,” said De Blasio, a de-facto Communist sympathizer who eats his pizza with a fork.

Heaven forfend Todd Starnes say anything positive about someone who eats his pizza with a knife and fork. That would never happen. Also, Todd? It's 2016; "de-facto Communist sympathizer" is roughly on par with "race-mixing integration advocate" for insult relevance and outright douchery.

So it’s not so much that de Blasio is anti-chicken as much as he is anti-Christian.

The truly incredible thing about Todd Starnes is how you can almost TASTE his smug smirk through your computer screen. It's a gift.

It was last year – just after they had opened their inaugural store in Manhattan. I noticed that after two weeks of drinking all that sweet tea and eating fried food, New Yorkers seemed a bit more – how can I put this – a bit more pleasant – and easy going.

Folks on the subway were even waving at each other – with all five fingers – instead of one.

OK, we're on record as believing New York City is the asshole capital of America and a soul-sucking abyss of human misery, and even we think this is some Grade A smugtacular douchecrap. Fuck you for making us sympathize with New York City, Todd Starnes.

Graham and Starnes were also joined in their call for stupidity by New York Post restaurant critic Steve Cuozzo:

Your suggestion that we avoid Chick-Fil-A because the company’s president disapproves of same-sex marriage made me gag.

We have asked this before, and we will apparently have to continue asking it until the end of time: why does every anti-LGBT Republican, be they a writer or a politician, INSIST on using the gayest fucking terms possible to describe their opposition to homo stuff? Don't answer that, it's rhetorical.

We're just waiting for the first person to shout about how Chick-Fil-A's FREEZE PEACH has been violated by de Blasio's unrighteous, discriminatory exhortation to maybe not eat at a restaurant chain that supports dickheaded conservative social policies. At that point, we'll have come full circle.