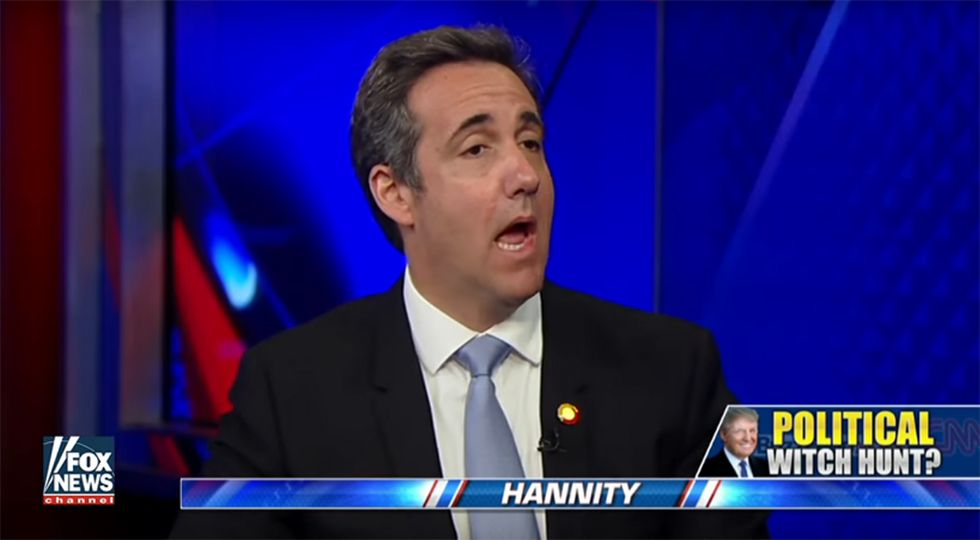 Did you say twenty years? OH.

Did you see that story yesterday about Eric Schneiderman lobbying to change New York law to stop the president from magically disappearing the one million criminal charges against his goon squad? Did it sound like blahblah TRUMP arglebargle PARDON yaddayadda NEW YORK?

That's what we're here for! Lawsplainers with a heaping serving of snark, garnished liberally with cusses!

Last Friday, Donald Trump pardoned Bush-era crimer Scooter Libby. Supernerds and geezers will remember that in 2007 Libby, Vice President Dick Cheney's Chief of Staff, was convicted of obstructing justice and lying to the FBI about the leak of CIA agent Valerie Plame's identity. George Bush commuted Libby's sentence, and he eventually got his voting rights and license to practice law restored. So why is Trump taking this trip in the wayback machine?

Well, What Else Happened Last Friday?

Oh, right. Michael Cohen skipped his court date to go smoke cigars on the patio with the cast of Goodfellas.

Also, Donald Trump talked on the phone with his most favorite fixer Michael Cohen. Which is not normal, since potential witnesses generally refrain from speaking to each other lest the prosecutors think they are conspiring to obstruct justice or alter their testimony. But not these guys!

Yeah, well, they're idiots. Michael Cohen is looking at the possibility of decades in prison. But we're guessing that he thinks he has a Get Out of Jail Free Card because Trump gives no shits about the law and will happily pardon him. Remember, Trump's former lawyer John Dowd was flapping his trap about presidential pardons to Paul Manafort and Michael Flynn last year, because OMG Donald Trump melts lawyers' brains!

But just in case Cohen doesn't read the paper, Donald Trump wanted to remind him the offer still stands, ALLEGEDLY. Hence the Libby pardon and the phone call.

Okay, But Where Does New York Come Into This?

New York is where Michael Cohen committed most of his one million crimes, allegedly. And if the feds don't prosecute Cohen, or if he gets pardoned by President Obstruction, New York would like to put Cohen in jail for all eternity. But there's A PROBLEM.

The Constitution protects Americans from double jeopardy, that is, being tried twice for the same crime. If Cohen (or Flynn, or Manafort) was charged in New York state court, Trump's pardon pen would be powerless. But what if he's charged in federal court and Trump whips out that pardon before he's convicted? Does jeopardy attach? That's fancy lawtalk for, "Can Trump time it so that Cohen can't be tried for those same crimes in state court?" For $500, Alex, WHAT IS IT'S COMPLICATED!

If you feel like a deep dive, law professor Jed Shugerman has got you covered over at Slate. Essentially, New York law holds that jeopardy attaches as soon as a jury is empaneled. So if Trump waits until the jurors get sworn in to issue a pardon, Cohen skates on those charges.

Simmer down, yous! They're working on it! Yesterday, New York Attorney General Eric Schneiderman sent a letter to Governor Cuomo asking that state law be amended to add pardons to the list of exceptions to the double jeopardy law.

New York’s law provides exceptions when a court nullifies a prior criminal proceeding (such as when an appeals court vacates a conviction), or even when a federal court overturns a federal conviction because the prosecution failed to establish an element of the crime that is not an element of the New York crime. But there is no parallel exception for when the President effectively nullifies a federal criminal prosecution via pardon.

And Cuomo, who has been bending over backward to establish his liberal bona fides since Cynthia Nixon declared her candidacy, agreed that Schneiderman had a point.

So, They're Gonna Fix This Shit, Right?

Yeah, probably. Although the New York Senate [Edit] Is currently controlled by Republicans who would probably try to fight it. Luckily, Michael Cohen was kind enough to violate plenty of state laws as well as federal -- whatever fuckery is going on with those taxi medallions is likely a state crime. Also, remember how Robert Mueller only charged Michael Flynn with one measly count of lying to the FBI? He was leaving plenty of stuff on the table for state authorities, because he is a generous man.

More importantly, though, that boy gonna flip! Here, have a hilarious quote from Politico this morning.

“I think for two years or four years or five years, Michael Cohen would be a stand-up guy. I think he’d tell them go piss up a rope. But depending on dollars involved, which can be a big driver, or if they look at him and say it’s not two to four years, it’s 18 to 22, then how loyal is he?” said one defense lawyer who represents a senior Trump aide in Mueller’s Russia investigation.

Exactly. New York should absolutely close that pardon loophole. But in the end, ain't no way Michael Cohen climbing up a rope saturated with 20 inches of piss.

Please click here to contribute to the Wonkette Fund for Profane Neologisms and Snarky Lawsplainers!