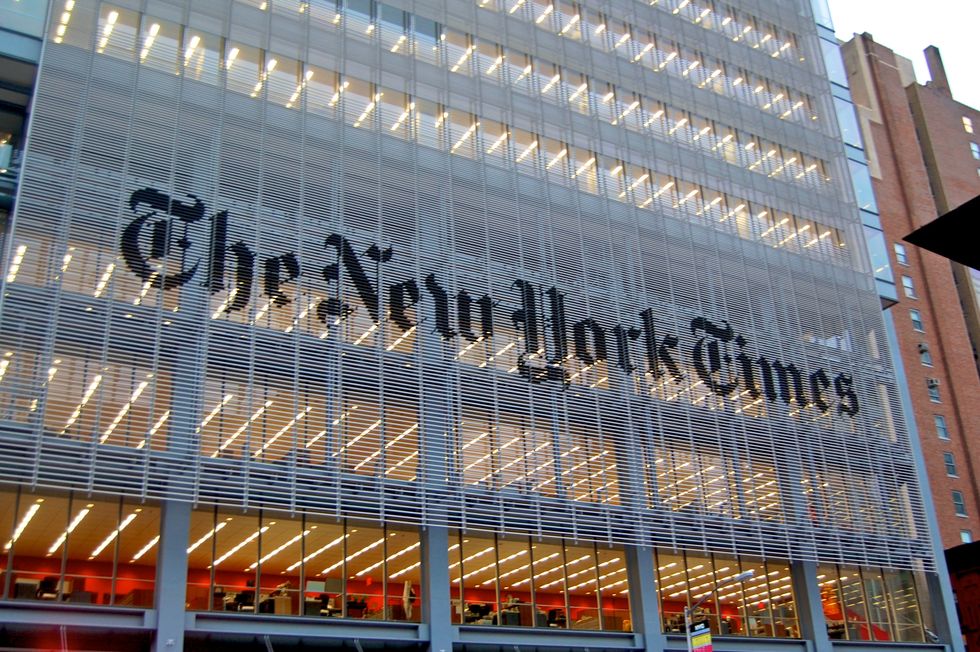 Here at Wonkette, we rag on the New York Times a little bit, but only when it's being THE WORST, which is only most of the time. Here, have a few Wonkette headlines:

"Now wait just a goshdarn minute," you are saying. "That last headline isn't about the Times sucking donkey balls!" IS TOO! It's a story about a Times INVESTIGATION!!!!1!! into the CLINTON FOUNDATION1!!!1! about all kinds of secret moneys and pay-to-play SCANDALS!!!!!!11! and it revealed ... absolutely nothing. If you read the Times's own article, there was no story, despite its !!!11!!! headline.

On its front page, top right—the most precious space in American print journalism—the Times wrote about Friday’s press conference in which Donald Trump declared that a) he now believed Barack Obama was a US citizen, b) he deserved credit for having established that fact despite rumors to the contrary and c) Hillary Clinton was to blame for the rumors. Traditionally, when a political candidate assembles facts so as to aggrandize himself and belittle his opponent, “objective” journalists like those at the Times respond with a “he said, she said” story. [...]

Yet thundering condemnation is exactly what the Times story provided. Its headline read, “Trump Gives Up a Lie But Refuses to Repent.” Not “falsehood,” which leaves open the possibility that Trump was merely mistaken, but “lie,” which suggests, accurately, that Trump had every reason to know that what he was saying about Obama’s citizenship was false.

[wonkbar]<a href="http://wonkette.com/606651/donald-trump-grants-president-obama-retroactive-citizenship"></a>[/wonkbar]Holy crap, NYT! Donald Trump is absolutely one of the ultimate birthers, and a well-known pathological liar. But the media has not been saying these things very good! And that press conference was absolute horseshit. Did somebody over at the Times offices decide to show up to journalism school this week? WHAT IS EVEN HAPPENING? SHOULD WONKET TAKE CREDIT?

Let's look at the source article, and see what it OH HOLY SHIT AGAIN, the headline online is even stronger than the print edition:

This is some good shit, yo:

It was not true in 2011, when Donald J. Trump mischievously began to question President Obama’s birthplace aloud in television interviews. “I’m starting to think that he was not born here,” he said at the time.

It was not true in 2012, when he took to Twitter to declare that “an ‘extremely credible source’” had called his office to inform him that Mr. Obama’s birth certificate was “a fraud.”

It was not true in 2014, when Mr. Trump invited hackers to “please hack Obama’s college records (destroyed?) and check ‘place of birth.’”

It was never true, any of it. Mr. Obama’s citizenship was never in question. No credible evidence ever suggested otherwise.

Yet it took Mr. Trump five years of dodging, winking and joking to surrender to reality, finally, on Friday ...

THAT IS THE FIRST FIVE GRAFS. The Times goes on to point out that Obama released his "short-form birth certificate" (THE FAKE ONE) in 2008, and all normal, well-adjusted Americans got over it. "But not Mr. Trump," the Times adds. What did he do instead?

He nurtured the conspiracy like a poisonous flower, watering and feeding it with an ardor that still baffles and embarrasses many around him.

The whole piece is worth your time, so we won't spoiler it. Let's see what Trump thinks:

[wonkbar]<a href="http://wonkette.com/575928/barack-obama-hates-maureen-dowd-as-do-all-patriotic-americans"></a>[/wonkbar]OK, to be fair, those two tweets came directly after he called Maureen Dowd a bag of crap, a statement all patriotic Americans including the foreign-born Obama would support, so they might not have been about the article in question. Regardless, we doubt Trump is real pleased with the Times's sudden about face in its coverage of his campaign.

Now look, we at Wonket are notoriously a bought-and-paid-for corporate Shillary for Killary. (Except for the paid-for part, ahem, Hillary campaign, WHERE ARE YOUR ADS?) But what the Times is saying is fucking true. It's not "unfair" journalism to say things that are true, whether you use many colorful "fuck" words like Wonket does, or if you say sexxxy words like "poisonous flower" and note that people Donald Trump knows are embarrassed by what a fuckshow he is. Those are just true facts. That, dear friends, is FAIR JOURNALISM. You might even say it is FAIR AND BALANCED journalism.

If there is no "there" there; if there is no legitimate "on the other hand"; IF ALL THE INVESTIGATIVE REPORTING ABOUT EMAILS AND THE CLINTON FOUNDATION HAS TURNED UP NOTHING EVEN RESEMBLING A GODDANG SMOKING GUN; then you should just say so.

We anxiously await the Times's upcoming retractions of all the other bad things it's published, which should surely be starting any minute now.