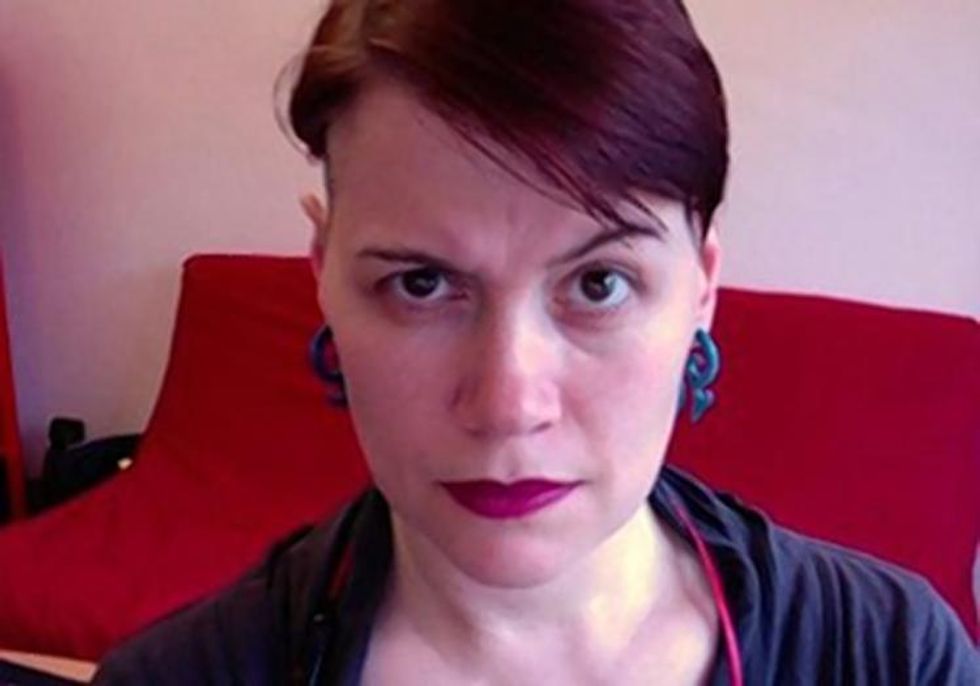 On Tuesday, the New York Times announced that Quinn Norton, formerly of Wired, would be their new “lead opinion writer on the power, culture and consequences of technology.” Later that evening, she was out.

Why? Because as it turns out, Norton likes to hang out with Nazis, including Andrew Auernheimer, better known as "weev" -- the notorious internet troll and white supremacist.

Should you be unfamiliar with his ways, here is a thing he once said, while trying to organize his fellow Nazis to show up at Heather Heyer's funeral:

All I want is to see [Jews] screaming in a pit of suffering on the soil of my homeland before I die ... I don’t want wealth. I don’t want power. I just want their daughters tortured to death in front of them and to laugh and spit in their faces while they scream.

Charming, no? If you can listen to that and not feel sick, there is something wrong with you. This is not an opinion about tax cuts, it's violence, and actual genocide instead of the kind they always say is being done to whites. It's psychotic.

This is not a case of someone simply having had a friend from "the past" who later turned out to be terrible. I've been there, you've been there, we've all been there. Norton was friends with "weev" and others while acknowledging that they were, in fact, white supremacists.

She was such good friends with him, in fact, that she once stated that she could not write objectively on him.

I must say at once that this man is someone I count as a friend. I have written him and sent him a book, which I doubt he has received. He has spent much of his recent time in solitary, and is being punished with various forms of isolation available to his captors. I can't write about my friend's incarceration with detached journalistic distance. I won't pretend to, nor even that the laws he is convicted of breaking are neutrally distant things. They are laws that have dogged my life and my community for years, incoherently and violently striking down computer experts like car accidents or cancer. They are a hated and random fate.

Norton has defended her "friendship" with Auernheimer by noting that she doesn't share his politics and thinks that "white folks need to engage with the racists in their life."

I agree with that to a point. It is, I think, the job of white people to help make other white people better and less racist.

There is, however, a wide, wide world of difference between Andrew Auernheimer and the average person's racist uncle. Maybe it is still possible to reach your racist uncle, or your Trump-voting uncle who doesn't think he's racist but is mad that no one ever talks about black-on-black crime. Unlikely, but possible. Also you're related to them and probably have to deal with them at family functions. It's different from trying to talk to people you knew before they started developing these ideas. Going out into the world and being like "You know what? I'm gonna go and befriend some Nazis" is a different thing altogether. It's not collecting your cousins, it's saying that wanting to murder Jewish people isn't a thing that turns you off quite enough to not want to hang with someone. And that is fucked up.

And sometimes, the only thing you can really do with your racist uncle who refuses to listen or change is to say "You know what? Your views are so appalling to me that I do not want anything to do with you anymore. Your views have cost you our relationship. Think about that, and if you change your mind, feel free to get in touch."

This is not like being friends with a Republican, this is not a mere difference of opinion -- this is like being friends with an unrepentant child molester or serial rapist or murderer, and being like "Oh, well, that's just one facet of who they are! They totally have redeeming qualities, even if they are constantly talking about how much they'd love to molest children or how they enjoy setting orphanages on fire."

It's also clear from Auernheimer's behavior that his "friendship" with Norton has not, in any way, tempered his views. They've been friends for years, so whatever she's supposedly doing to "engage" him is clearly not working. That, however, didn't matter to her because he and all the other neo-Nazis she hangs with wouldn't want to throw her into the ovens anyway. Because they are friends.

The Times has said they didn't know about Norton's friendship with Nazis prior to hiring her, and they did dismiss her as soon as this was discovered. However, the fact that they were unable to discover this and a bunch of people on Twitter were does not give one confidence in their journalistic expertise. If you're going to hire someone to write an opinion column, these are things you should probably look into.

Norton is really just the latest in a series of questionable opinion columnists hired by venerable publications in the name of "balance." Last year, the Times hired conservative climate denialist Bret Stephens, which gives the false impression that not believing in climate change is a reasonable opinion to hold, which it is not. They employ Bari Weiss, queen of bad takes, who recently responded to criticism of a tweet she made that incorrectly implied that Olympic figure skater Mirai Nagasu was an immigrant (she is not) by suggesting that such criticism heralded THE VERY END OF CIVILIZATION.

For its part, the Washington Post has recently hired Megan McArdle, known for hot takes on things like how living in a building made of flammable materials with no sprinkler system was simply a reasonable "trade-off" for cheap housing -- referring to a building in London that went up in flames and killed 71 people.

Having an opinion column in a major paper like that is a big freaking deal. Having a job where you give your opinion, in general, is a big freaking deal. It's a reward, really. Not everyone in the world can have that job. The choices a newspaper or other media outlet makes in giving that platform to people must be responsible, and not just done in the name of some "both-sides-ism." Surely there are tech columnists who are not actual friends with Nazis. Surely there are conservatives who can manage to be conservative without denying science. Surely there are conservatives who can manage to be less flippant about 71 people burning to death. If the New York Times and the Washington Post want to have some conservatives on staff, that's fine! No one is saying that their opinion columns must lean entirely to the left -- but they do need to be more serious about who they give that platform to. Before you start sending all your NYT and WaPo subscription moneys to Wonkette.

Full disclosure: I interviewed Norton for a 2017 Bust Magazine article about cybernetic implants.

Give all your New York Times lunch money to Wonkette, instead! None of us are friends with Nazis.