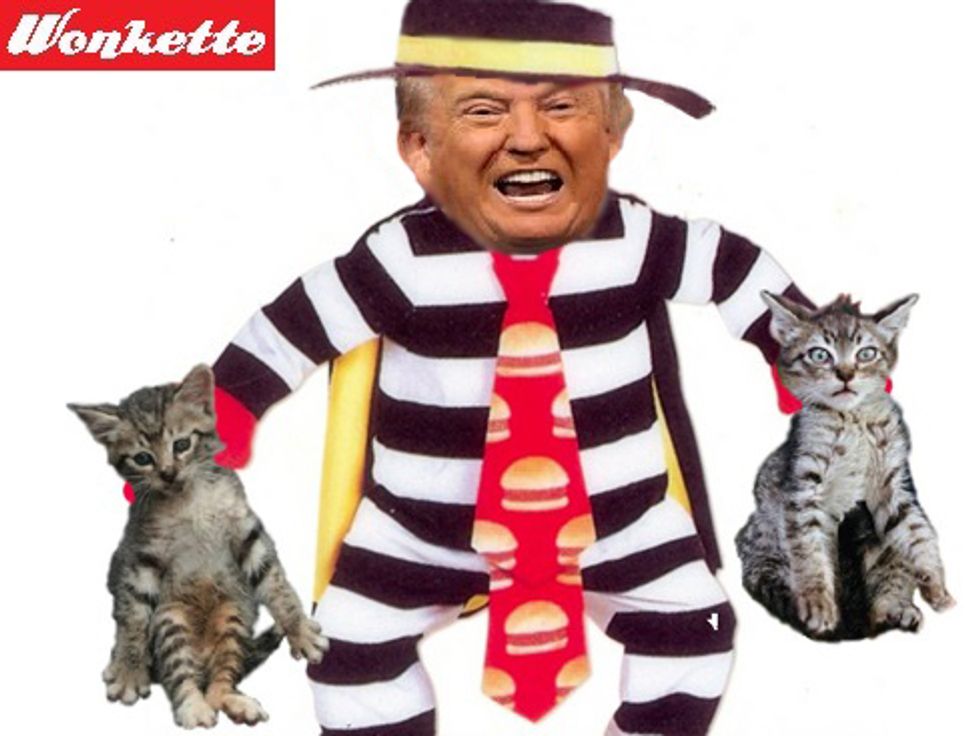 Donald Trump is bad at many things: He is bad at business, and human decency, and words. It will not shock you to learn he is also bad at "Constitution," because you have ears and eyes and have paid attention when he said he wants to "open up the libel laws" so "when they write purposely negative and horrible and false articles, we can sue them and win lots of money. When The New York Times writes a hit piece which is a total disgrace or when The Washington Post, which is there for other reasons, writes a hit piece, we can sue them and win money instead of having no chance of winning because they’re totally protected.”

Trump's wife, Melania, has already begun suing websites for reporting claims made in biographies that she was a call girl. Most, but not all, capitulated with a groveling quickness. (She's using the same lawyer who sued Gawker to death, and who knows his way around bullying the press.) But now the Trumps are picking on someone their own size, and The New York Times's lawyers are peeing their pants. But with laughter, instead of fear.

[wonkbar]<a href="http://wonkette.com/607513/somebody-did-all-the-groping-and-it-was-donald-trump-allegedly"></a>[/wonkbar]Poor Donald Trump. Some days it's so hard to be a stupid bully. Like when a whole trumpload of women call up a newspaper in outrage because they just watched the presidential nominee of one of the United States of America's two major political parties claim on television with a straight face that he has never, ever assaulted a woman sexually, because of how he has to answer that question because of how he was accidentally caught on video bragging about it, and the newspaper interviews them and the people they told about it at the time, and then prints their allegations! That is a bad day to try to throw your ignorance about the First Amendment around, I guess!

I write in response to your letter of October 12, 2016 to Dean Baquet concerning your client Donald Trump, the Republican Party nominee for President of the United States. You write concerning our article "Two Women Say Donald Trump Touched Them Inappropriately" and label the article as "libel per se." You ask that we "remove it from [our] website and issue a full and immediate retraction and apology." We decline to do so.

The essence of a libel claim, of course, is the protection of one’s reputation. Mr. Trump has bragged about his non-consensual sexual touching of women. He has bragged about intruding on beauty pageant contestants in their dressing rooms. He acquiesced to a radio host’s request to discuss Mr. Trump's own daughter as a "piece of ass." Multiple women not mentioned in our article have publicly come forward to report on Mr. Trump's unwanted advances. Nothing in our article has had the slightest effect on the reputation that Mr. Trump, through his own words and actions, has already created for himself.

[our bold, because it is awesome]

But there is a larger and much more important point here. The women quoted in our story spoke out on an issue of national importance -- indeed, an issue that Mr. Trump himself discussed with the whole nation watching during Sunday night's presidential debate. Our reporters diligently worked to confirm the women's accounts. They provided readers with Mr. Trump's response, including his forceful denial of the women’s reports. It would have been a disservice not just to our readers but to democracy itself to silence their voices. We did what the law allows: We published newsworthy information about a subject of deep public concern. If Mr. Trump disagrees, if he believes that American citizens had no right to hear what these women had to say and that the law of this country forces us and those who would dare to criticize him to stand silent or be punished, we welcome the opportunity to have a court set him straight.

David E. McCraw forgot only one thing in his lawsplainer, and that was that the New York Times LITERALLY INVENTED the First Amendment right to report on public officials and public figures, in NYT vs. Sullivan.

They know a couple of things about Constitutional rights.

That's because Donald Trump's ex-wife swore under oath that he violently raped her while yanking locks of her hair out of her head.

This is also your periodic reminder that Mitch McConnell is saving an open Supreme Court seat for Donald Trump to fill, the end.