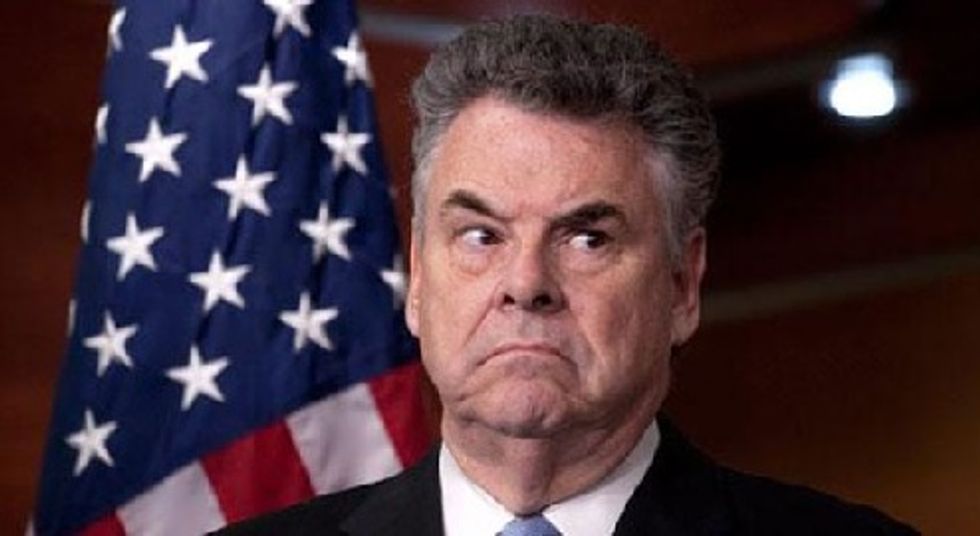 Grumpy owl and New York congressman Peter King (R-IRA) announced this weekend that, having protected America from the Ground Zero Mosque and scary Muslims taking over America, he will now take his bigotry on the road and run for President of the United States. As the first GOP candidate to announce, he wins a special prize, which is for everyone to ask "Is he the IRA guy or the guy with calves the size of cantaloupes?" (Answer: Yes.)

The New York Daily News reports that, while visiting New Hampshire Friday, King told a radio station that he was in the state “because right now I'm running for President.”

King also explained that he's hoping to move the party away from libertarians and foreign-policy isolationists like Rand Paul. He brings to the race a certain amount of mavericky maverickness, having yelled at fellow Republicans over their foot-dragging on Hurricane Sandy relief and also having supported slightly stronger background checks on gun sales (i.e., he wants to destroy the second amendment and freedom and take away everyone's gun forever).

Wonkette wishes Rep. King luck, if only because he might make the first couple of debates interesting before his campaign runs out of money. Then again, to punish the liberal media, the debates may be conducted in secret anyway, so we aren't sure we'd see much.