Newsweek: Other Than The Pedophilia, Mr. Hastert, What's On Your Mind These Days? 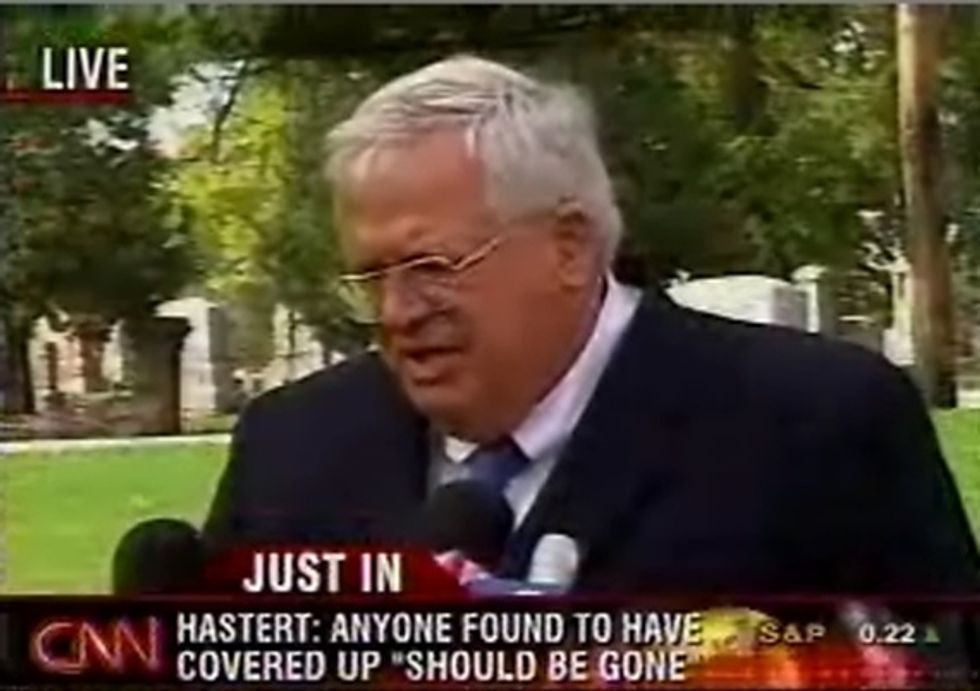 There sure is a lot of news lately! There's chaos in the White House, a bunch of infighting toddlers in Congress, and a great big Hollywood sexual harassment/rape scandal that Hillary Clinton is apparently personally responsible for. So maybe finding good sources for commentary on The Current Scene is really, really, hard -- so hard that, to really understand what's going on in the world, Newsweek had to seek out the opinion of former House Speaker Dennis Hastert, who was released from federal prison in July, after serving 13 months on a bank fraud charge. Hastert had fiddled with bank withdrawals in an attempt to cover up his hush-money payments to a former high school student he'd also fiddled with, in a sort of meta coverup.

So why the hell is Newsweek asking Dennis Hastert's opinion on anything other than what circle of Dante's Hell he belongs in? (Trick question: it is the lowest circle, for betrayal.) Turns out Newsweek's Alexander Nazaryan was writing a big essay on the new book by E.J. Dionne, Norman Ornstein, and Thomas Mann, One Nation After Trump, which looks at how our politics got so dysfunctional and suggests that maybe we could someday return to some kind of old-time bipartisanship, eventually, after the infection is treated and the swelling goes down.

Dionne et al. argue, admitting it's not exactly a novel idea, that the current mess in Congress really got rolling with Newt Gingrich's implacable opposition to everything Bill Clinton ever did, and that as Gingrich's successor, Hastert continued the slow asphyxiation of bipartisanship with his "Hastert rule," the not-quite-a-rule that House Republicans would never advance a bill without a majority of their own party voting for it, though Democrats might be allowed to vote for Republican bills, too, just as long as Democrats aren't the majority of a bill's supporters. And since Newt Gingrich wouldn't give Newsweek the time of day, Nazaryan gave Hastert a call to see if he cared to reply to being called the second-biggest murderer of bipartisanship in recent history. (We haven't yet read the book yet, but we assume the authors place appropriate blame on Mitch McConnell for the killing blow.) Needless to say, Hastert said he didn't think he'd actually killed bipartisanship so much as kicked it hard in the balls, and it's not his fault if bipartisanship wasn't wearing a cup. So while most of the essay isn't really about Hastert, the fact that he went on the record at all gave Newsweek this newsy hed and tweetbait:

Yes, Nazaryan does mention Hastert's conviction and the sex abuse case before moving on to the politics stuff, but it really is just one tiny paragraph, a bit of due diligence to be gotten out of the way before seeking the thoughts of the elder (pedophile) statesman. It's jarring as all hell, only a few notches less bizarre than "Charles Manson shares his thoughts on Benedict Canyon Real Estate, Then And Now."

Pollster Matt McDermott is one of several folks who found the whole thing more than a little odd, especially given the current Republican freakouts over how Hillary Clinton shook hands with Harvey Weinstein.

Double standard? Maybe a little. Still, we can count our blessings. Even though he's still around, Newsweek didn't seek out William Calley to share his thoughts on Ken Burns's Vietnam War documentary.

Yr Wonkette is supported by reader donations. Click here to give us money, and we promise to never seek the opinion of Dennis Hastert, James O'Keefe, Charles Manson, or Tommy Wiseau.