Newt Gingrich Bragging On Twitter About Dinosaur Skull He Owned 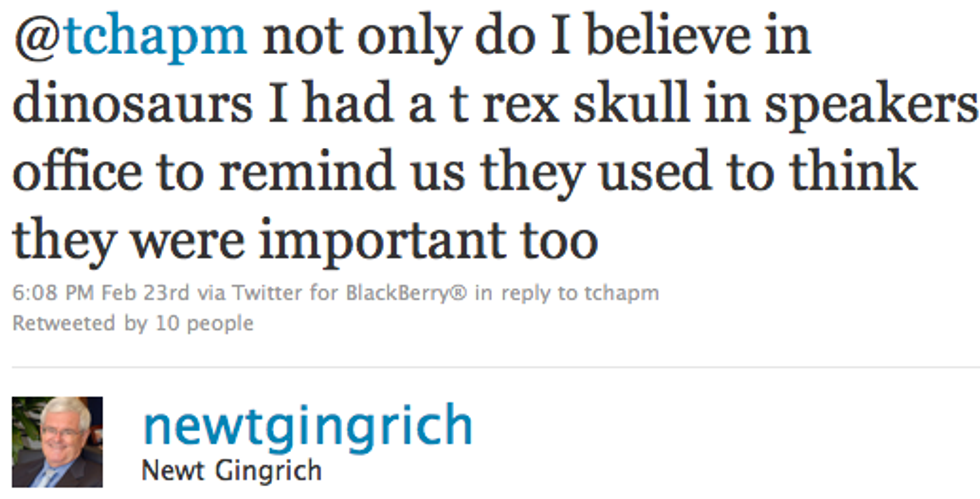 Hey, it's everyone's favorite adulterous grifter, on the Twitter. What is Newt up to these days? "Great visit to the academy of natural sciences in philadelphia today-love the dinosaurs and the historic collection," he wrote Tuesday. When some librul jokester tweeted back, "Come on, you don't really believe in dinosaurs," Newt responded with the tweet above. Is it legal to keep a dinosaur's skull in your office? Probably not. But if Newt does it, it is. And then Newt tweeted "@OneTokenBlack" for no apparent reason.

Here's from a transcript of an old PBS interview Newt once did:

INTERVIEWER: Why did you hang it up? What does it represent?

NEWT GINGRICH: We didn't hang it. It's actually on a large platform because a Tyrannosaurus rex skull is very big. I always wanted to be a dinosaur collector or a zookeeper, and [when] I had a chance to decorate my office like I wanted to, since I was speaker, I really wanted it there to break things up. I wanted it there to say, "Let's not take ourselves too seriously. Let's not assume that what we're doing is life and death."

Also on Tuesday, somebody with the handle "OneTokenBlack" tweeted this:

Newt wanted to respond, because he obviously really identified with this. But he couldn't think of anything:

The humble beginnings of some wonderful new adultery? [Twitter/PBS]