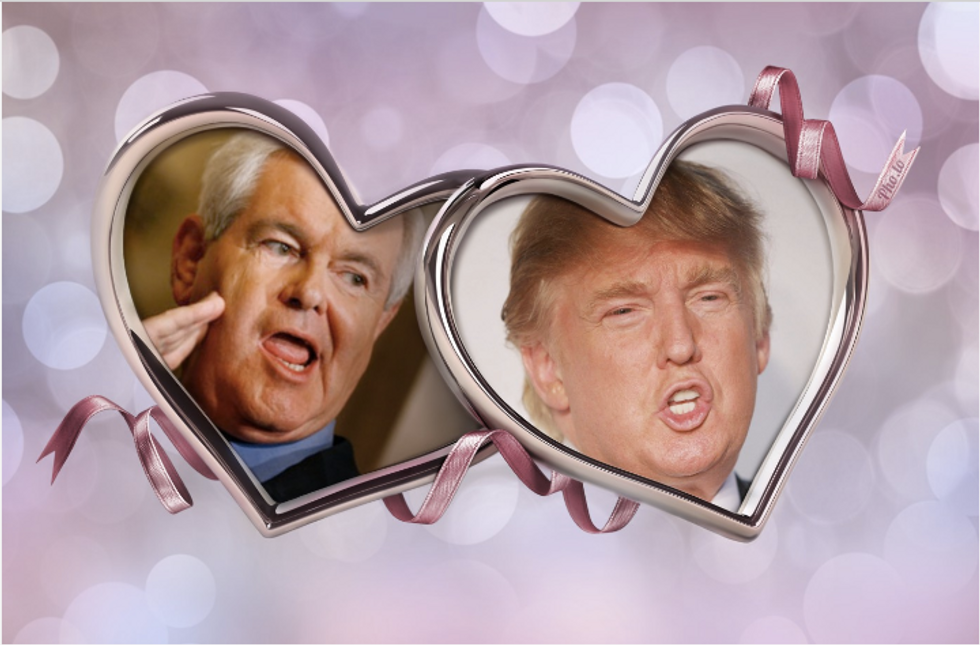 OOOOOOH! Mr. Newton Leroy Gingrich is gunning super hard to be Donald Trump's VP, still. It is his fondest dream! And thus, he is making the rounds on the talk shows and talking about how super great Donald Trump is, in hopes Trump will finally notice him and let him wear his letterman's jacket.

Wednesday night, Newt popped by Sean Hannity's television program for a chat. A chat about Donald Trump, in which he explained that there is just no model for “the Donald Trump unique, extraordinary experience, not Ronald Reagan, not Richard Nixon — you just have to relax and take it for that unique experience."

I just have to say that I think it really says a lot about Newt Gingrich that "relax and take it" is a thing you say to a person in order to prepare them for something that is going to be some kind of enjoyable experience. Traditionally, the only time anyone ever says anything like that, it is because they are preparing you for terrible sex or because they are the bad guy in an After School Special who would like you to take some random free drugs.

[wonkbar]<a href="http://wonkette.com/602443/donald-trump-media-veterans-donations"></a>[/wonkbar]Of course, there was more to the interview than Newt simply fantasizing about lying back and thinking of England while Trump has his unique and extraordinary way with him. In fact, he even had some gentle criticism for him, suggesting that perhaps he overreaches juuuuuuust a teensy bit with his criticism of the media. You know, like when it looks into things he says instead of simply writing about what a great guy he is. Which is how the journamalism is supposed to work. Duh.

Newt says he hopes Trump will come to understand that those in the media “are decent people, they just play for the other team — it’s like having a bunch of referees in a game who support the other side, who will go in and block, carry, and tackle the ball.”

[wonkbar]<a href="http://wonkette.com/594211/mommy-why-are-donald-trump-and-fox-news-fighting"></a>[/wonkbar]If I recall correctly, and I do believe I do, it seems to me that one of the biggest tiffs Donald Trump has had with The Media so far was with Fox News? Does this mean that the Fox News people are all LIBERALS now? Who are trying to destroy Donald Trump in order to advance their socialist agenda and plan to redistribute the wealth of the nation? And does Sean Hannity, who was sitting right there, have any inside information on this liberal bias infesting Fox News? And also, if they are on our team, can we please kick them off? They are not terribly helpful, and tend not to play well with others.

Anyway, the moral of this story is that Newt Gingrich and Donald Trump are both a tad paranoid, and would thus make an adorably quirky buddy cop presidential campaign! Wait, no, that is not it. The moral of this story is that you should not fuck any Republicans, ever! Not just cause they want to take your whore pills away and hate non-procreative sex, but also because they are a bad time.