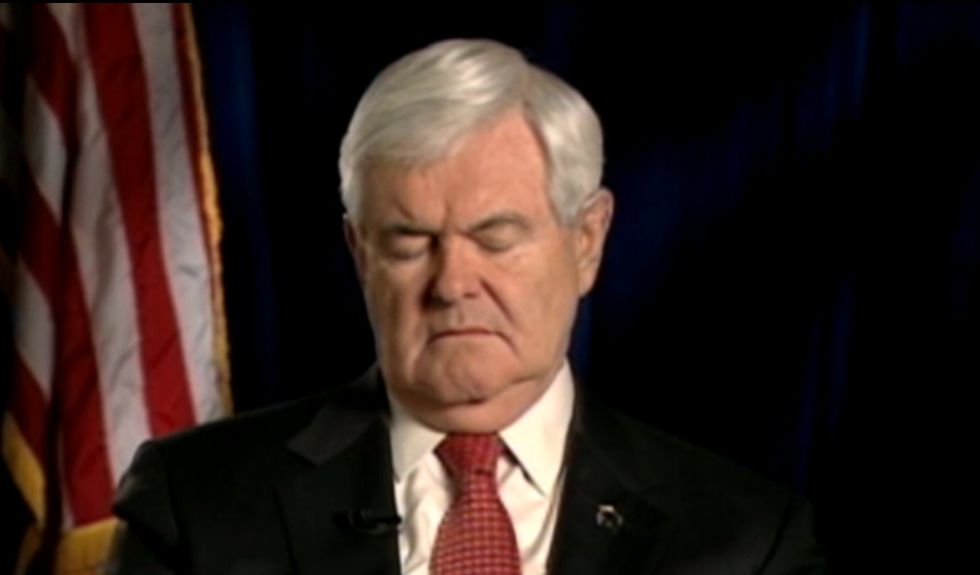 A Tale Of Two Newts:

Oh golly, what changed? Special prosecutor Robert Mueller is, of course, one of the most respected public servants we have, and his reputation, as Newt said in his first tweet, is unimpeachable. Is he upset because Mueller is actually hiring the best people for the investigation? As GQ notes, the team Mueller is building "include[s] men and women responsible for bringing down Nixon, Enron and the mafia," and one of his recent hires, Deputy Solicitor General Michael Dreeben, was referred to as "quite possibly the best criminal appellate lawyer in America" in a post at Lawfare. It's almost like Mueller is actually serious about this investigation, and the quality of his hires seems to signal that there's a LOT of "there" there, and he wants to have only the best and brightest by his side so they can really dig in and find the truth.

That is not what Newt Gingrich wanted. You see, when Mueller was announced, Mueller was still a paragon of "honesty and integrity" in the tiny brains of Gingrich and Trump, just like they used to think James Comey was a totally great guy. But now Mueller, like Comey did before him, is actually acting independently, instead of pledging his loyalty to Trump and making this matter go away.

Reaction to Gingrich's little whine tweet came swiftly, even from conservatives, as Chuck Todd found when he took to Twitter to ask, "Fucking for real, Newt?"

To be clear, the team Mueller is assembling will get to the truth, whether Newtie and Donald like it or not. And if there's truly nothing to be found, they will find that! We doubt they're going to find "nothing," though.

What sorts of lawyers and judges would Newt Gingrich like to see on Mueller's team? Wonkette has ideas:

In Newt Gingrich's perfect world, where Newt Gingrich is considered smart and attractive and Donald Trump is innocent and competent, that would be a bangin' team. But over here in the real world, we guess we'll stick with Robert Mueller and the incredibly smart, skilled and savvy team he's building, the one with the track record of vanquishing errbody who ever needed vanquishing.