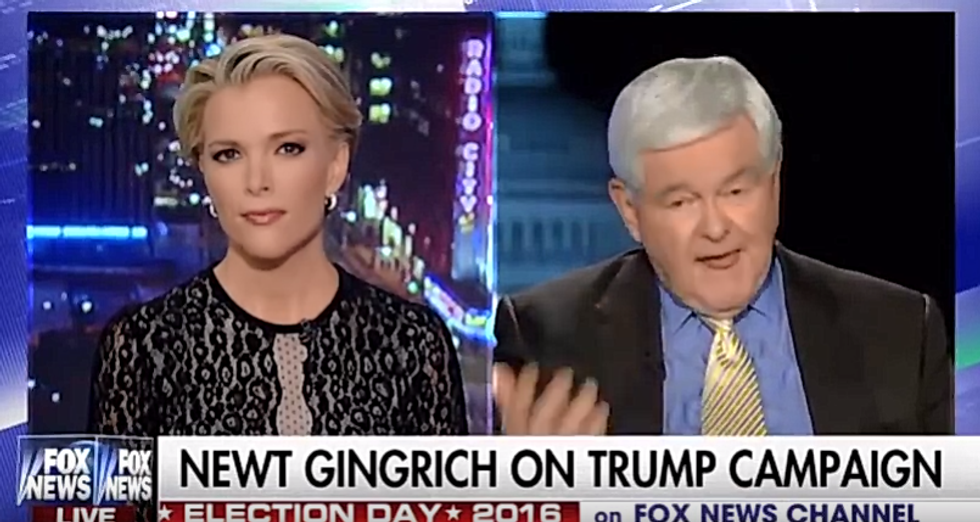 The exchange, in a nutshell

Boy howdy there was a brawl at the Fox News hootenanny Tuesday night! That nice former Speaker Newt Gingrich, who only cheated on his wife because he loves America too much, went on Megyn Kelly's Fox News program "I'm Just Waiting To Resign Until After The Election," and they HAD A FIGHT. The first couple minutes were fine: Kelly pressed him on how his boy Donald Trump was losing the election, and Gingrich responded with typical shill words about how NUH UH we are winning and here's why. All good so far!

[wonkbar]<a href="http://wonkette.com/440245/newt-gingrich-committed-adultery-because-patriotism-made-him-horny"></a>[/wonkbar]Then it went to hell, because it was unfair for Kelly to cite nonpartisan polls that suggest Trump is going to lose HARD, because that's only the truth in an "alternative universe" from the one where Gingrich lives. He said Fox News is "part of the establishment," because everyone knows Fox News has a well-known liberal bias.

Then things REALLY REALLY went to hell, because Megyn Kelly said ANTI-TRUMP CUSSES, by which we mean she noted that approximately one-hundred-eleventy women have accused Donald Trump of groping or sexually assaulting them. That made Gingrich very GRRR ARGH! And that is where we will pick up the long transcript (WATCH THE VIDEO, THOUGH, WATCH IT):

GINGRICH: The three major networks spent 23 minutes attacking Donald Trump that night, and 57 seconds on Hillary Clinton's secret speeches. You don't think this is a scale of bias worthy of Pravda and Izvestia? I mean, you want to know why Donald Trump has had a rough time --

KELLY: If Trump is a sexual predator, that is ...

GINGRICH: HE'S NOT A SEXUAL PREDATOR! YOU CAN'T SAY THAT!

GINGRICH: I'm sick and tired of people like you using language that's inflammatory, that's not true.

Oh, but you see, Kelly is taking a position on it, because she said "if," which implies that it might be true that Donald Trump is, in fact, a sexual predator. It all comes down to what the meaning of "if" is, is what we are saying. Let Gingrich 'splain:

GINGRICH: ... When you use the words, you took a position, and I think it's very unfair of you to do that, Megyn. I think that is exactly the bias people are upset by.

KELLY: I think that your defensiveness on this may speak volumes, sir.

Time for Megyn Kelly to launch into a soliloquy about News, How Does It Work?

KELLY: What I said is if Trump is a sexual predator, then it's a big story. And what we saw on that tape was Trump himself saying that he likes to grab women by the genitals and kiss them against their will. [...] Then we saw ten women come forward after he denied actually doing it, at a debate, to say that was untrue. [...] He denies it all, which is his right. We don't know what the truth is.

My point to you is that as a media story, we don't get to say the ten women are lying. We have to cover that story, sir.

NOT FAIR! Hillary did a speech in Brazil! All Trump did was maybe sexually assault a number of women! #DOUBLESTANDARD!

GINGRICH: Oh, so it's worth 23 minutes of the three networks to cover that story, and Hillary Clinton in a secret speech in Brazil to a bank that pays her $225,000, saying her dream is an open border, where 600 million people could come to America, that's not worth covering ...

That's not what Hillary Clinton said at all, but let's not let fact-checking get in the way of Newtie's little temper tantrum, because he knows this is only happening because sex-obsessed lady Megyn Kelly is obsessed with sex:

GINGRICH: You want to go back through the tapes of your show recently? You are fascinated with sex, and you don't care about public policy.

GINGRICH: That's what I get out of watching you tonight.

Kelly replied that no, she is not "fascinated by sex," but she's pretty interested in "the protection of women," and again, this is news, so fuck you. Gingrich replied that BUT, BUT, BILL CLINTON!

GINGRICH: Do you want to comment on whether the Clinton ticket has a relationship to a sexual predator?

Kelly said she HAS covered all the Clinton conspiracies on Fox News, but oh no, Gingrich was not done:

SAY IT! SAY IT! Say Bill Clinton stained the blue dress! Otherwise, what has Newt Gingrich's entire career even meant? (Nothing. The answer is that America would be better had he never crawled from 'neath his mother's bosom.)

Kelly noted again that she's covered all the Clinton Cray-Cray, but that America is much more concerned with the people who are actually ON THE TICKET, and concluded by telling Gingrich, "You can take your anger issues and spend some time working on them, Mr. Speaker."

SO THAT HAPPENED. Quite a handful of a tantrum from Mr. Adultery Pants, don't you think?

So, Newt Gingrich, are you pleased with yourself?