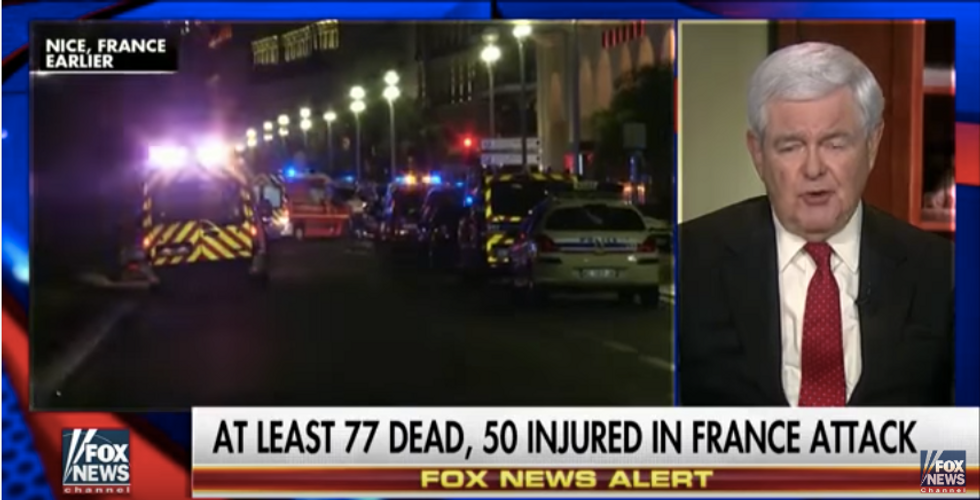 Is Newt Gingrich getting a little jealous over Donald Trump loving Mike Pence more than him? MAYBE! Perhaps that is why, last night, he got on the teevee with Mike Huckabee and promoted a very Trumpian (Trump-esque? Trumpish?) counterterrorism plan in light of the attack in Nice, France.

And what is this plan? WELL, he would like to test all the Muslims in the country to see if they believe in Sharia Law, and deport them if they do.

So let me start with where I'm coming from, and let me be as blunt and as direct as I can be: Western civilization is in a war. We should frankly test every person here who is of a Muslim background, and if they believe in Sharia, they should be deported. Sharia is incompatible with Western civilization. Modern Muslims who have given up Sharia, glad to have them as citizens. Perfectly happy to have them next door.

But we need to be fairly relentless about defining who our enemies are. Anybody who goes on a website favoring ISIS or al Qaeda or other terrorist groups, that should be a felony, and they should go to jail. Any organization which hosts such a website should be engaged in a felony. It should be closed down immediately. [...]

This will probably be pretty weird for those who were born here! Where is he going to deport them to, even? What? He's just gonna load up a plane with a bunch of American citizens and drop them off somewhere in the Middle East?

And how will this "testing" even work? Will he keep them in a room all day and see if they attempt to pray five times a day? Hand them a BLT and see if they'll eat it? What if they are just Jewish? Or vegetarian? Does Newt Gingrich even know what the hell sharia law even is? It seems like he does not! Because it sure encompasses a lot of things that have literally nothing to do with terrorism at all. It's like, a lot of dietary laws and observances and praying, mostly.

Sure! There are lots of schools of thought that say the punishment for apostasy is death -- but the vast, vast, vast majority of Muslims do not so much go in for that. Iran tried to sentence a man to death once for apostasy, and was censured so harshly by the rest of the world that they didn't go through with it anyway. ALSO, the Bible says you should kill people for many reasons as well.

For instance, Leviticus 21:9 says a woman can't have sex if her dad is a priest:

“A priest’s daughter who loses her honor by committing fornication and thereby dishonors her father also, shall be burned to death.”

“If any man take a wife, and go in unto her, and hate her … and say, I took this woman, and when I came to her, I found her not a maid: Then shall the father of the damsel, and her mother, take and bring forth the tokens of the damsel’s virginity unto the elders of the city in the gate…. But if this thing be true, and the tokens of virginity be not found for the damsel: Then they shall bring out the damsel to the door of her father’s house, and the men of her city shall stone her with stones that she die: because she hath wrought folly in Israel, to play the whore in her father’s house: so shalt thou put evil away from among you.”

GOOD TIMES! And yes, the Bible says these things, and also says you can be put to death for being gay or eating shellfish or wearing polyester! Should we check all the Christians to see if they believe these things? You know, because they are in the Bible, after all. I mean, how many people has Newt Gingrich stoned?

SHAME ON US, I guess.