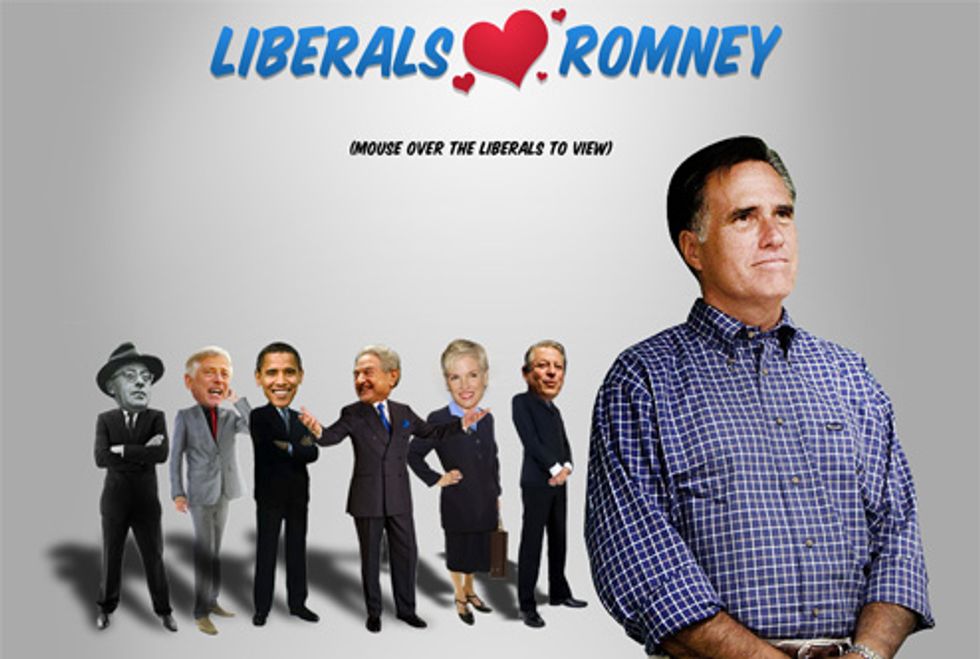 Wait, wait, we'll tell you all about Newt Gingrich's plans to get laid tonight in just a second -- that is what you all want to read about, right? -- but first: This Newt Gingrich "Valentine's Day attack site,"Liberals Love Romney. It points out that Romney and various liberal men are gay for each other, which is hardly news. See it? There's Al Gore, there's Barack Obama, there's George Soros, there's Saul Alinsky. Oh, a lady -- she needs to leave. It's going to be a great Valentine's night for Mitt Romney, according to this dumb Newt Gingrich website. What's in store for Gingrich himself? Just go ahead and vomit now, to get it out of the way.

“What are you going to do for your beautiful wife tomorrow on Valentine’s Day?” a woman attending a Hispanic fundraiser asked the candidate. People in the audience hooted audibly.

Almost (but not quite) embarrassed, Gingrich looked around to supporters on stage and joked, “After that question, I need something a little stronger than water."

“All I can promise you is that I believe she will quite happy tomorrow night,” he continued. “And we’re going to have a nice, little private – I think the first time in a while, we have a private dinner, and just hopefully exchange gifts and, you know, reconnect a little bit, but she’s uh -- “ Gingrich paused as cheers could be heard from the crowd, “You know?” A man behind him on the stage smiled knowingly.

The candidate, grinning, held his hands up, “But I’m not going to get into -- no more details!”

It sounds like they're going to... drink chamomile tea and watch Masterpiece Theatre before calling it an early evening in their separate beds. Gross! Did we just ruin your Valentine's Day? Suckers.