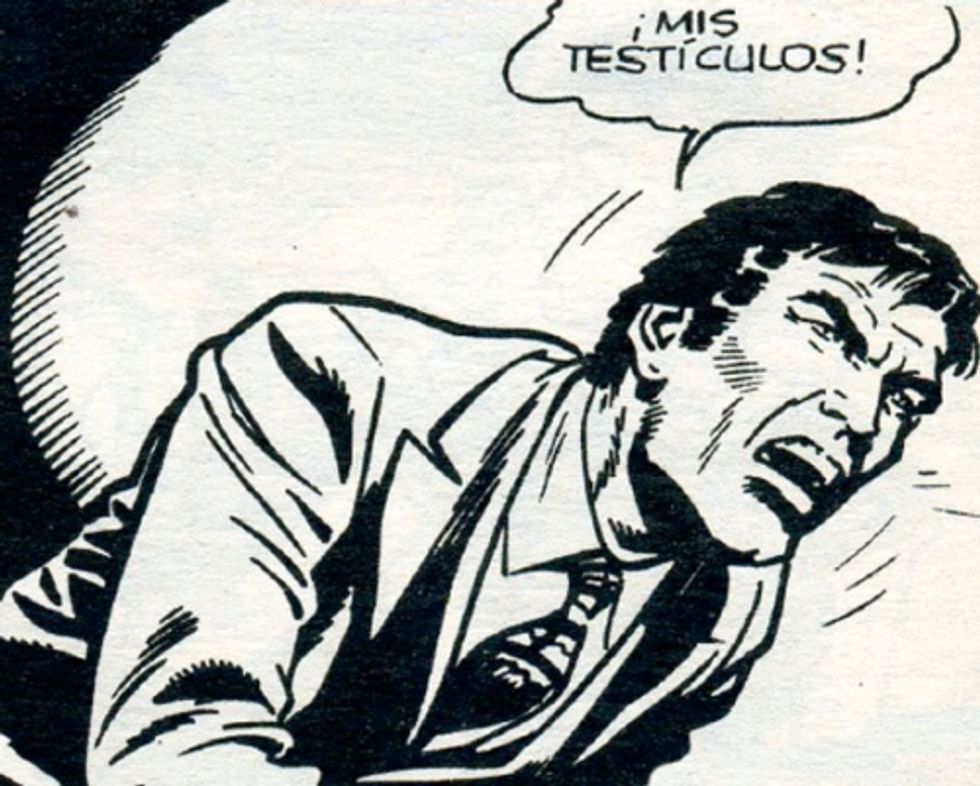 Do you frequently find yourself longing for a simpler, quieter time? A time with less argument, less dissent? A time where pesky things like "women" were not all walking around, being humans?

Niagara Falls Reporter editor Frank Parlato is! He's tired of women trying to be men, goddammit, with their having jobs, and not cooking things, and if a movie critic wants to review movies that challenge that, well, he's gotta find another damn paper, because this paper is for real men.

Roger Ebert let the critic in question, Michael Calleri, go on for like 20 or 30,000 words about the whole ordeal, but this is the Internet, where that kind of thing is Frowned Upon. The email from Parlato to Calleri is the part that will make you want to face-punch a cute animal, for all the ridiculous misogyny, so that's the part we are bringing to you on this, a day in the 21st century. We know, we know, the m-word is a big red flag for some liberal anthropology major whinefest, but this one is not made up and you should read it if you're having a good day and would like it ruined immediately.

Here are the highlights. Words are entirely Parlato's:

i have a deep moral objection to publishing reviews of films that offend me.

OK, we are already off to a bad start.

snow white and the huntsman is such a film. when my boys were young i would never have allowed them to go to such a film for i believe it would injure their developing manhood. if i would not let my own sons see it, why would i want to publish anything about it?

BECAUSE THAT IS YOUR JOB, NEWSPAPER MAN. Also, just wanted to take a second to point out the phrase "developing manhood." What is going to stunt these poor delicate boy-manhoods?

snow white and the huntsman is trash. moral garbage. a lot of fuzzy feminist thinking and pandering to creepy hollywood mores produced by metrosexual imbeciles.

I don't want to publish reviews of films where women are alpha and men are beta.

where women are heroes and villains and men are just lesser versions or shadows of females.

i believe in manliness.

Just take a second to absorb that, then take another second to take your wallet out from between your teeth and let your jaw unclench. Thaaat's it. Relax. There's still more. Just move past the idea that believing in this brand of "manliness" also appears to mean believing in the subservience of women.

OK. Actually, you may want to bite down on that wallet again:

with all the publications in the world who glorify what i find offensive, it should not be hard for you to publish your reviews with any number of these.

Hollywood! Egad! They want our boys to be girls and our girls to be humans! Who will stop them?

If you care to write reviews where men act like good strong men and have a heroic inspiring influence on young people to build up their character (if there are such movies being made) i will be glad to publish these.

i am not interested in supporting the reversing of traditional gender roles.

There's nothing snarky to say here, really. Dude wants women to be at home, raising his children, with their delicate manhoods. He just said that, with his typey-fingers, and we are upset.

Don't worry, though — Parlato has an explanation. He posted it on the newspaper's website (which appears to have been made around the same time as his ideas on gender):

One of the problems with Calleri’s writing, and probably the main reason his movie reviews were hardly read, is that he lacks the fundamentals in sound thinking or logic.

OK, so that isn't really a defense of anything. Do you regret saying that stuff, that mean, oppressive stuff?

For the record, if I knew Calleri was going to publish my off-the-record and, in parts, tongue-in-cheek email, I would have added capital letters and a couple of commas, but I wouldn't have changed what I wrote.

In fact I might have made the language even stronger.

I might remind the reader that the email does not say I would not consider reviews of films where men and women are both shown in an inspiring light. I am simply not interested in films that demean men, or men of a particular race.

I did not say that women should have lesser courage or true, inner strength than a man. I merely said I do not have an interest in seeing men depicted as weaker, dumber, more cowardly or lower than women. In other words, no male bashing. And, consequently, no female bashing.

Is there a Pulitzer for fucked-up logic in the news? It looks like the Reporter just put itself in strong contention — Men should always be stronger than women, because women should not be bashed. Make a spot on the shelf!

He then goes on to tell a women to "consider not thinking of herself as a victim," a guy to "consider a sex change," and suggesting people who disagree with him "may have a deep-seated daddy issue."

But yes, we are the ones who are the wrong sexes, with issues. [Romenesko]