Nice Insurance Companies You Got Here. Be A Not-Shame If Bernie Sanders Happened To Them 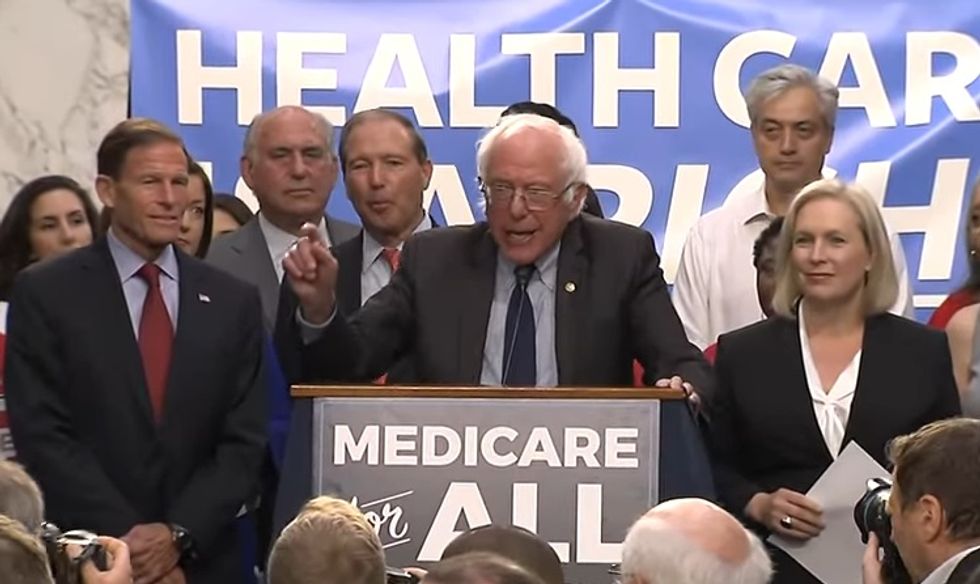 Bernie Sanders and 16 Democratic co-sponsors rolled out a real proposal for single-payer health insurance Wednesday, and since the PBS Newshour decided to YouTube the whole hourlong presser, there it is up there for you to watch. Before we get into the details on this bill -- which everyone knows is not going to pass in this session of Congress but that's not the point -- let's just everybody take a moment to listen to the first speaker, Dr. Sanjeev Sriram, a pediatrician and professor at George Washington University, who puts the whole damn purpose of this bill into perspective at the six-minute mark:

When it comes to health policy, a lot of people quote Senator Ted Kennedy, but I want to echo his older brother: On this day, 55 years ago, President John F Kennedy challenged Americans to reach for the stars.

Something about the symmetry of that timing just made Yr old cynical Dok Zoom tear up: Passing single-payer really is a kind of moon shot for social policy in this country, as long as you overlook teensy details like the fact that if single-payer is the moon, Britain landed there in 1948 and Germany got there well before modern rocketry. But because we are a nation of idiots with a patchwork of legacy healthcare systems that don't work in any coherent fashion, getting to single payer will take a hell of an effort. (Also, we get misty-eyed about the moon landings no matter what.)

So let's see what's on the drawing board. We'll be cribbing from a couple of really nice 'splainers, at NPR and, as always, by Sarah Kliff at Vox, who is the Carl Sagan of making healthcare policy make sense to Regular Folks (if we were regular, we wouldn't need the doctor).

What the heck is this "Medicare for All?"

That's the name, and the basic idea, but the bill would really expand Medicare far beyond what it does right now, eventually covering most medical services, including even vision and dental, which aren't currently covered by Medicare, or for that matter by most for-profit health insurance plans. (John Conyers, who has been introducing his own Medicare For All bill in the House every term since he's been in Congress, has a similar bill which transitions everyone in two years instead of four, . UPDATE: Sorry! Editing mistake! Conyers's bill includes both, plus chiropractic!) Private health insurance would presumably wither away under the Sanders plan (although as some system gets hammered out, we wouldn't be surprised if, as in other countries with single-payer, private insurers could provide supplemental coverage for stuff beyond the basics). The basic shape would be a lot like the Canadian system, where the government provides the insurance and a heavily-regulated private sector provides the care. Kliff explainers how things would change:

It would bar employers from offering separate plans that compete with this new, government-run option. It would sunset Medicare and Medicaid, transitioning their enrollees into the new universal plan. It would, however, allow two existing health systems to continue to operate as they do now: the Veterans Affairs health system and the Indian Health Services [...]

The plan is significantly more generous than the single-payer plans run by America’s peer countries. The Canadian health care system, for example, does not cover vision or dental care, prescription drugs, rehabilitative services, or home health services. Instead, two-thirds of Canadians take out private insurance policies to cover these benefits. The Netherlands has a similar set of benefits (it also excludes dental and vision care), as does Australia.

The Sanders plan would also do away with out-of-pocket costs for consumers: No deductibles, no copays, except for prescription drugs. This would also be different from other countries' systems; when I taught in Japan, for instance, I went to the hospital for chest pain one time (probably gas), and had about a $20 fee for the doctor visit, EKG, and blood work. We'd expect whatever real plan develops to have some similar costs to patients, if only to allay fears that people will run off to a doctor for every headache.

The plan would be phased in -- over four years in Sanders's proposal, probably longer in whatever plan really launches:

The first year, the Medicare eligibility age would be lowered to 55. That would move to 45 and then to 35 over the following two years, until finally, in the fourth year, everyone would be covered.

How Would This Affect Healthcare Costs?

The big selling point of any single-payer plan is that with one system, overhead and administrative costs would be slashed, since providers wouldn't have to bill multiple payers with multiple reimbursement plans and god only knows how much paperwork. All that overhead is the reason for the legendary $20 hospital aspirin. Kliff notes (we are required to say that once per Vox article we use):

American doctors spend lots of money dealing with insurers because there are thousands of them, each negotiating their own rate with every hospital and doctor. An appendectomy, for example, can cost anywhere from $1,529 to $186,955, depending on how good of a deal an insurer can get from a hospital [...]

One 2003 article in the New England Journal of Medicine estimates that the United States spends twice as much on administrative costs as Canada. A 2011 study in the journal Health Affairs estimates American doctors spend four times as much dealing with insurance companies compared with Canada.

Other savings would come from the ability of the government to negotiate a single price for every service, every class of prescription drug, every category of medical device, the way insurers do now, only without the huge variations from case to case. It works ridiculously well in Europe, which is why some Americans who can afford the travel decide to get joint replacements done in Belgium, even if they have insurance here.

How much would a single-payer system reduce medical costs? There's no CBO score on that yet, obviously, but the fact that other countries manage to cover all their people with a lower per-capita cost for healthcare definitely indicates we could do it here. But dickheads like Martin Shkreli wouldn't be able to make an overnight killing by jacking up the price of life-saving drugs, which would of course mean the end of capitalism.

And yes, some parts of the Sanders plan would drive up costs; the more inclusive benefits would be pricey, and the lack of any "skin in the game" for consumers might lead to more frequent doctor and hospital visits. Expect any real single-payer scheme to have at least some out-of-pocket costs to consumers, probably with subsidies or exemptions for low-income folks.

That's not actually addressed in the Sanders proposal, which is fine for a bill that's aspirational at this stage. Sanders posted a number of financing options Wednesday, and obviously the "How do you pay for it?" question has to have a damn good answer. But the math seems doable, as long as you consider the obscene amounts of money currently going to a profit-driven system that doesn't cover everyone, and look at how eliminating the high costs of our inefficient system would save overall. When people talk about their fear of higher taxes, any good proposal should be able to demonstrate that we can cover all Americans at about the same cost as we're currently spending to cover some Americans, and that instead of spending thousands on insurance premiums and out-of-pocket costs, the average American would spend some of that on taxes, and none of it to an insurance company.

An encouraging poll result, as far as changing minds goes: When people are told that single-payer reduces the administrative costs of insurance, support for single-payer jumps from just 55 percent to 72 percent. Similarly, when healthcare is framed as a basic right, support goes up to 71 percent.

If you want, you could even point out that single-payer -- of some kind, even if it's not the Sanders plan -- is the one healthcare option that really would meet all those promises Trump was making about replacing Obamacare: It would cost less, cover everyone, and provide terrific coverage.

There are some excellent selling points for single-payer, and if other countries are doing it, and doing it well, there's no reason why America can't get its shit together on healthcare, too. And won't it be nice to start fighting FOR healthcare, not just to defend it?

Let's go to the moon.