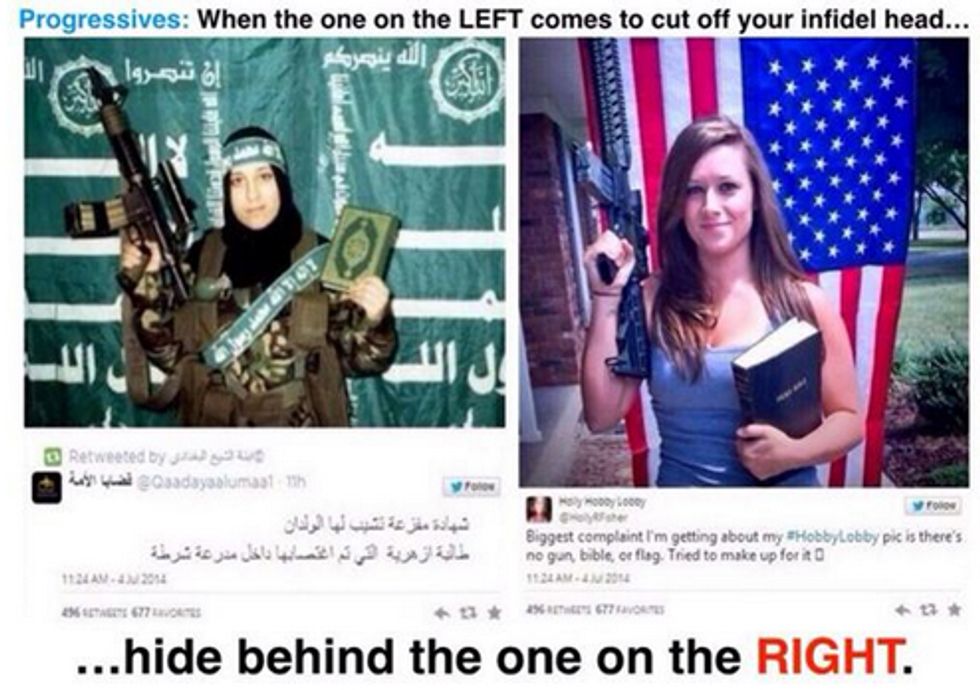 Holly Fisher is a big fan of Hobby Lobby, America, and Right Living, and she can't for the life of her understand why anyone would find anything wrong with this photo she tweeted on the 4th of July, because as she explained to Fox News, it's just a picture of her expressing her First and Second Amendment rights. Besides, she explained, the photo was just a sequel to another photo she'd posted of herself standing in front of Hobby Lobby in a "PRO-LIFE" shirt while holding a Chick-fil-A cup -- and her friends said, "The only thing missing is your gun or your Bible or your flag." So she took that second picture.

And then some smartasses noticed that the photo looked oddly similar to another common pose in pictures:

And then Reddit had fun with it a bit, and so of course idiots from the internet sent threatening messages to Holly Fisher because human beings are scum, and then Holly Fisher went on Fox News to say that she was flabbergasted that anyone would think she looked like a terrorist:

“I expected less backlash with this than I did the first one because the picture is, like, America’s founding principles. That’s all that’s in the picture. And I really didn’t think it would cause the uproar that it has.”

She also explained that she posted the flag-gun picture, along with the message "ATTENTION LIBERALS: do NOT look at this picture. Your head will most likely explode," because liberals are mean and she felt that beleaguered conservatives need to have their voices heard, saying that there's a

“growing intolerance among the left, and I feel like conservatives are becoming more and more afraid to speak up. I know I’m not going to change any minds of liberals, And I accept that. I understand. Like, I’m not hateful with people who don’t agree with me, but I just want people to know that it’s okay. Like, you’re not alone.”

You know, it's just such a rare thing for anyone to have a bumper sticker saying "God, Guns and Guts made this country great."

Needless to say, anyone who sent her death threats or wished for the death of her baby -- and yes, Fox showed a tweet saying that -- is a first-class dick. It doesn't exactly prove, however, that lovers of God and the Bible are a persecuted minority.

Happily, some other internet genius figured out why there's no similarity at all between the two photos:

Also, Charles C. Cooke over at NRO knows exactly why the two pics are different: One is a deeply faithful patriot who is willing to do whatever is necessary to defend her country and her faith, and the other is a terrorist with no regard for human life. Besides, Cooke explains, while Muslim fundamentalists are violent extremists, Christian fundamentalists just don't do violence. In reply to Patheos blogger Michael Stone, who noted a violent strand of rhetoric in the Christian right, Cooke says,

As Stone himself confirms, that “strand” about which he is so vexed seems to be remarkably peaceful. He asks:

How long until the Christian extremists stop flirting with violence and start shooting?

Not sure, Michael. Enjoy the wait, though.

Hey, why wait? George Tiller is only the most recent in a string of people murdered by nice Christians who were out to save the world from baby-killers. And the two dead and seven injured at the Knoxville Unitarian-Universalist church in 2008 were gunned down by a guy who'd had it with intolerant liberals ruining this country, too.

Haha, we are only joking. Those are only isolated incidents.