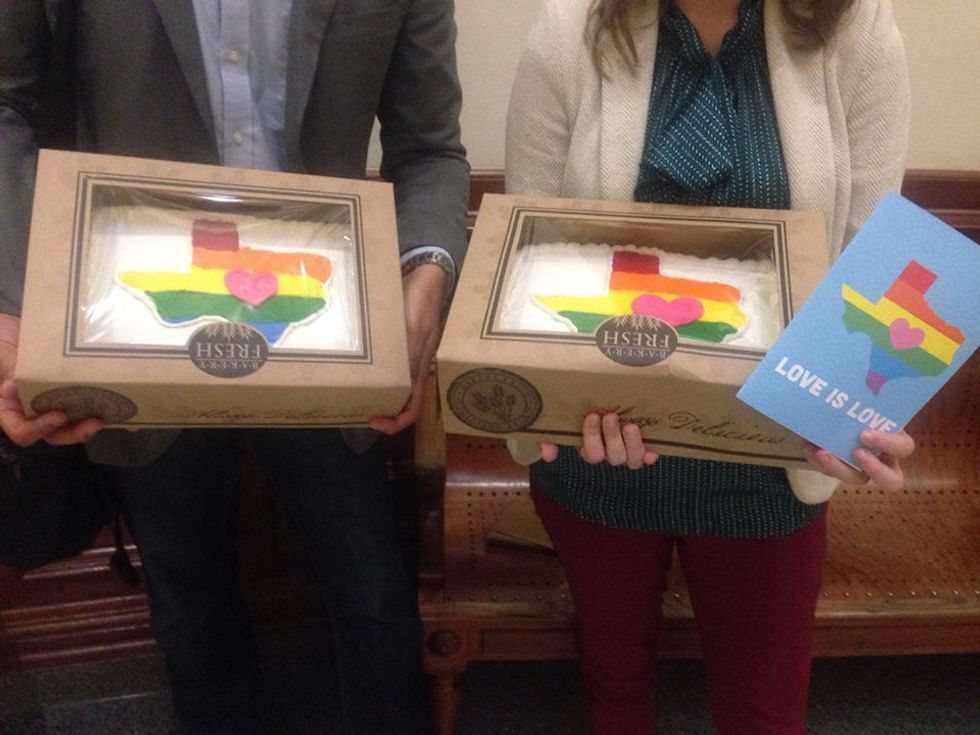 Texanbigots are just NOT OKAY with all these homosexuals comin' all up into Texas and destroying opposite marriage for everybody. Know who IS okay with the gays destroying everything? Texas Democrats, that is who! They decided this week to deliver gay love cakes to a select group of the worst gay-hatin' Texas Republicans of all:

Earlier this week, Texas Republicans reached a whole new low. They celebrated Texas’ 10-year ban on marriage equality -- denying tens of thousands the liberty to marry who they love -- with hate-filled wedding cakes that appeared on the front-page of a major Texas newspaper.

We want to send these officials a clear message that Texans stand up for the freedom and the right to marry who you love. So we’re going to send several of the people in this picture a slice of love -- cakes that show that, in Texas, love is love.

Let them eat cake, even if they hate gays so much that they want to celebrate by making their own bigot cakes! And, nicer still, they didn't even add, "OR DEATH"?

Molly White, for reference, is the one who wants to pass a law that says Texas doesn't have to abide by no fuckin' Supreme Court ruling on marriage, and Cecil Bell is the one who wants to take salaries, pensions, and benefits from anybody who issues a marriage license to a gay in Texas. We are sure the others listed are dumb as shit as well.

So cake them, they did!

Oh, those ARE nice cakes! Probably won't change any of the bigots' minds, but it might keep them at the buffet table long enough to give the Supreme Court time to throat-cram Texas once and for all. The Texas Democrats say that, if you want them to be able to send more cakes to assholes, you can give them money, please.