Nice Time: Barack Obama Keeps Letting People Out Of Prison Instead Of Locking Them Up! 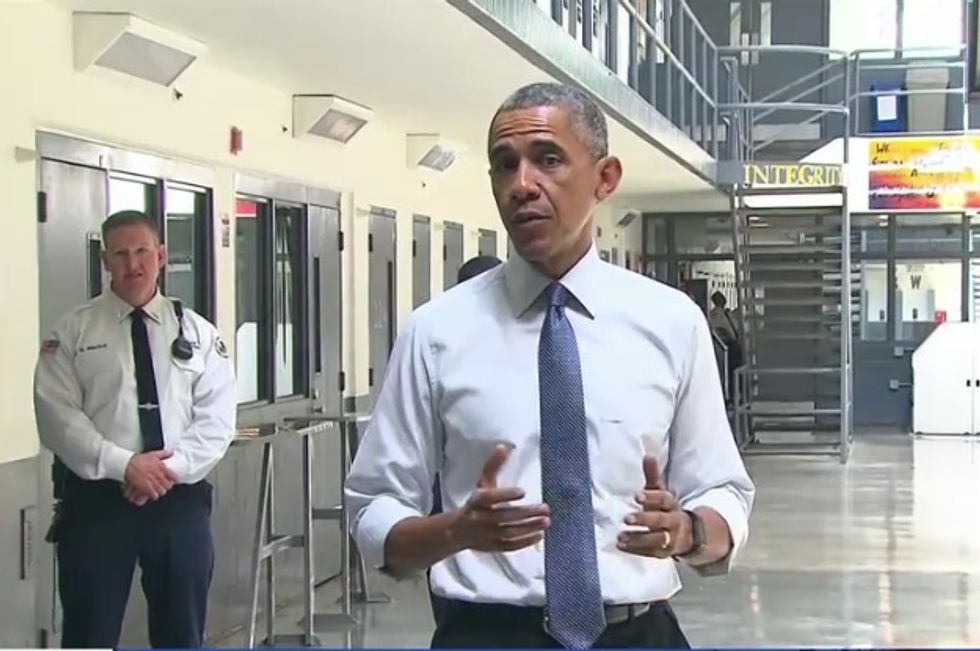 Sorry, Republicans, he was just visiting, in 2015

Barack Obama continued adding to the record number of pardons and commutations he's issued during his presidency as part of an effort at prison reform by pardoning 78 people and commuting the sentences of another 153 prisoners Monday. Enjoy this final month with President SmartDecent, since despite bipartisan support for prison reforms, the new guy may completely toss out many of the Obama reforms, and you can bet he won't be commuting the sentences of any drug offenders to bring their sentences in line with modern sentencing guidelines. But this is a Nice Time post, so let's focus on the nice, which is that the Obama administration has made a huge effort to pardon or commute sentences of nonviolent drug offenders who were sentenced under far harsher guidelines than someone convicted of the same offenses would be today:

Among those granted clemency: Corey Jacobs, 47, who was serving a life sentence for a first felony conviction on a charge for selling drugs. No, he didn't murder or rob anyone. He got sent to prison for life without a chance of parole, because in the '80s and '90s politicians were winning lots of elections by promising to Git Tuff on drugs. So a few thousand first-time drug offenders got life in prison as if they'd murdered someone? Tough -- they were criminal scum, and America was in a punitive mood, no matter how overcrowded the prisons became or how insane the racial disparities that resulted from different sentences for offenses involving crack and powdered cocaine. Happily, sentencing reform is one area where Barack Obama has managed to make some real differences, some of which may even last.

“I am elated at the news about my client, Corey Jacobs, receiving clemency from President Obama today,” Jacobs’s attorney, Brittany K. Byrd, said Monday. “Corey has more than paid his debt to society by serving over 17 years of a life-without-parole sentence as a nonviolent drug offender. Life in prison without the possibility of parole screams that a person is beyond hope, beyond redemption. And in Corey’s case, it is a punishment that absolutely did not fit the crime. The president’s mercy and belief in redemption literally saved Corey’s life.”

Even the judge in Jacobs's case wrote a letter supporting his clemency petition, writing that were it not for mandatory sentencing laws, he would not have given Jacobs a life sentence. Here's hoping the Trump administration doesn't start going after such liberal pantywaist judges just to prove its Law-n-Order credentials, as if that really meant much for a president who'll be violating the Constitution the moment he's inaugurated. Wait, we were sticking with the nice time.

In a New York Times op-ed in August, Eric Holder wrote that Jacobs deserved a prison sentence for his felony, but asked, "does he deserve to die there?" Now we have an answer, at least for Corey Jacobs. Holder went on to say,

Sadly, Mr. Jacobs is no anomaly. There are thousands like him serving sentences in our federal and state systems that are disproportionate to their crimes. The financial cost of our current incarceration policy is straining government budgets; the human and community costs are incalculable.

In another case still waiting for the White House to review, Bruce Harrison, a 64-year-old Vietnam vet who was featured in a Washington Post story on aging prisoners locked away well into old age due to mandatory minimums, has only served 23 years of the 50 years he was sentenced to for transporting drugs. Jurors in Harrison's case were shocked to find out how long his mandatory sentence would be:

“If I would have been given the right to not only judge the facts in this case, but also the law and the actions taken by the government, the prosecutor, local and federal law enforcement officers connected in this case would be in jail and not the defendants,” juror Patrick L. McNeil wrote.

The Justice Department will review all clemency petitions -- including Harrison's, presumably -- submitted through August of this year so they can be sent to the president with recommendations before his term ends; Obama is likely to grant more pardons and commutations before he turns the Oval Office over to the "Lock Her Up!" guy, who as far as we know is already trying to figure out how to pardon himself.