Nice Time! Congress Votes Unanimously To Protect Nonbelievers' Rights. What Are They Up To???? 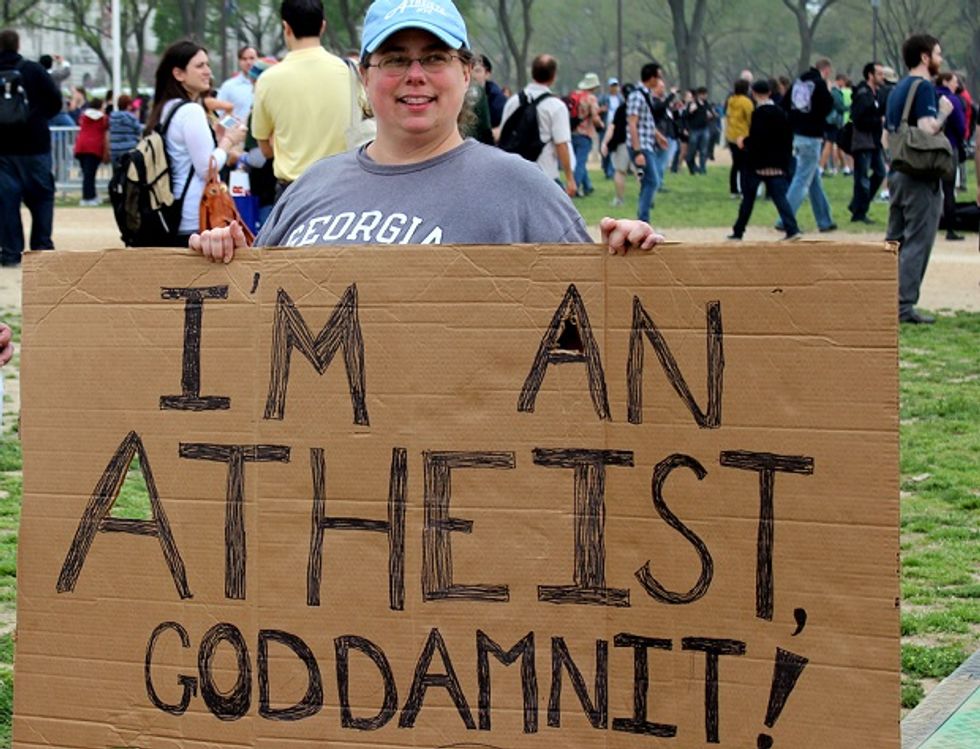 Also a TrekkER, not a TrekkIE

Here is some very surprising Nice Time news for you all: Both houses of Congress voted unanimously to update an 18-year-old law on international religious freedom, adding for the first time ever language calling for the protection of all people of faith, and people of no faith at all, too. The updated version of the International Religious Freedom Act was signed Friday by President Obama, and the law had bipartisan support as a means of strengthening the U.S. government's ability to condemn countries and non-state groups that persecute people on the basis of faith. Or on the basis of nonbelief, too, if you can believe that:

“The freedom of thought, conscience, and religion is understood to protect theistic and non-theistic beliefs and the right not to profess or practice any religion,” according to the new law governing international programs, which passed the House and Senate unanimously, without controversy.

The new language will empower the government to take action against governments which oppress atheists, particularly in Saudi Arabia, which has sentenced atheists to flogging, and in Bangladesh, where a number of atheist and freethinking bloggers have been attacked or murdered by Islamic fundamentalists.

The new legislation strengthens the 1998 International Religious Freedom Act, which gives the State Department the ability to identify and denounce regimes that violate the rights of people to worship freely. The update allows the U.S. government to also designate non-state actors like terrorist groups or individuals, create a comprehensive list of religious prisoners, and require international religious freedom training for all foreign service officers.

Who is making Corey Lewandowski a victim in the War On Christmas? WHO?

It's unclear whether the president-elect will be briefed on the new law; it's entirely possible he may insist on a further revision calling for all U.S. diplomats to say "Merry Christmas" regardless of which country they're assigned to.

The bill's sponsor in the House was New Jersey Republican Chris Smith, who said the reference to non-theism was added to help U.S. efforts to condemn Chinese repression of groups like Falun Gong, which is a spiritual but not theistic movement despised by the Chinese government as subversive.

“We wanted to make clear that … nobody is coerced into believing in God if they don’t want to,” Smith said. “I’m a Catholic and I believe very deeply in God, but Christ said, ‘I stand at the door and knock. If you welcome me, I come in.’ And that’s the way religious liberty ought to be, absolutely voluntary. People have a right not to believe.”

Smith said the non-theist reference was noncontroversial, even among the more evangelical Christian members of Congress.

“It speaks well of all of us, of everyone, that we really wanted to protect freedom of conscience for all people,” Smith said.

Oh, OK, so they all felt very good about how open-minded they were, especially as regards other countries being mean to religious and nonreligious minorities. Just as long as none of those atheists insist the Bible can't be used as a science textbook in Louisiana. This is beginning to make a bit more sense.

Marco Rubio Becomes 2016 G.O.P. Frontrunner By Being Cuban, An Idiot

The bill's Senate sponsor was Marco Rubio, who is not a scientist and isn't sure whether Earth is 4.5 billion years old or 6,000 years old, but at least doesn't think anyone should be executed, or even discriminated against, for actually thinking science is real, so that's nice:

“America was founded in part by people fleeing religious persecution, and the U.S. has a moral responsibility to be a champion for oppressed people around the world,” he said in a statement.

Mind you, if he thought he could be elected president by saying atheists torture kittens, he'd have an ad out condemning atheist kitten-torture in a Miami minute (which is like a New York minute, only wetter, due to the climate change that definitely isn't raising sea levels. But we digress).

In addition to adding protections for nontheists, the new law also empowers the State Department to identify and condemn violators of religious freedom that are not associated with a government -- think ISIS, or the freelance Islamic extremist gangs in Bangladesh who operate with a wink and a nod from the government -- and also to establish

a special watch list to identify those places of concern before they escalate to become a “country of particular concern,” which can bring economic and political sanctions.

And now the real mind-blower: the new law, including the protections for non-theists, was even endorsed by the Family Research Council, the frootloops fundagelical outfit that sees gay and anti-Christian plots everywhere:

“We want to see strong religious freedom protections for everyone, regardless of their faith,” said Travis Weber, director of the Center for Religious Liberty at the Family Research Council.

Why does Anderson have to keep pointing out Pam Bondi's past anti-gay bigotry, NO FAIR!

So what the hell is going on here? Our guess: It's OK since it's a law affecting foreigns, and adding ammunition to the rhetorical arsenal that can be used to condemn "Radical Islamic Terrorism," sort of like how a lot of conservatives suddenly pretended to love gay people after the Orlando massacre because it was one more thing to rhetorically beat up Muslims with. As long as it's dirty foreigns, especially Muslims, who are oppressing atheists, Congress is happy to condemn those horrible violations of human rights.

Here in the U.S. of A., there's no shortage of good Christian folks who'd like to ban the construction of mosques or tell seven-year-old kids they'd better not be atheists.

We also suspect that somewhere in there, these guys are trying to move toward a law giving atheists the right to discriminate against gays just like Christians can.