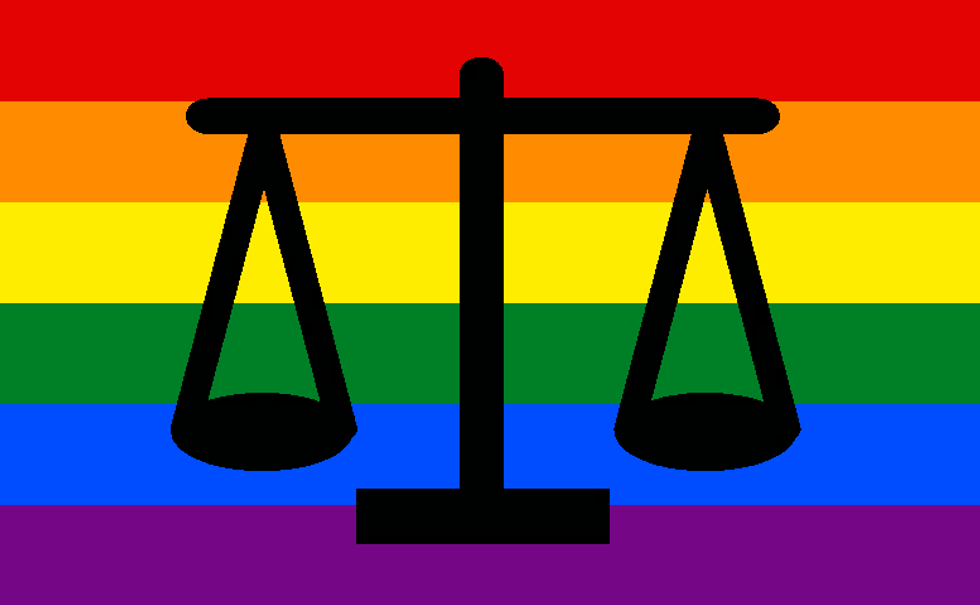 It was the best of times, it was the worst of times. Mostly it was the worst. But even in the Trumpian hellscape, there are bright spots. We really are making progress on transgender rights in this country, despite the bullshit bathroom bills that dominate the news. Here's a rundown of three times this month that the courts have held the line against GOP attempts to drag the country back into the Dark Ages.

Last week, Judge Martin Garbis in the US District Court for Maryland issued a preliminary injunction against Chairman MAGA's ban on providing appropriate medical care for transgender servicemembers. Naturally, the DOD lawyers argued that Trump's tweet booting transgender people out of the military was a well-thought-out policy, carefully crafted after significant consideration, not something he traded with bigoted Congresslady Vicky Hartzler to get his stupid Fuck You Mexico wall funded.

After consultation with my Generals and military experts, please be advised that the United States Government will not accept or allow......

....Transgender individuals to serve in any capacity in the U.S. Military. Our military must be focused on decisive and overwhelming.....

....victory and cannot be burdened with the tremendous medical costs and disruption that transgender in the military would entail. Thank you

But Judge Garbis was NOT HAVING IT.

A capricious, arbitrary, and unqualified tweet of new policy does not trump the methodical and systematic review by military stakeholders qualified to understand the ramifications of policy changes.

Because if there's anyone unqualified to understand the ramifications of military policy changes, it's Donny Bonespurs. So trans members of the military can get their medical care just like everyone else. Because they are, in fact, JUST LIKE EVERYONE ELSE.

When our Commander in Chief was an actual adult (Come back, Barack!), it intensively studied the issue and concluded that allowing trans people to serve openly would have no effect on military readiness or unit cohesion. Obama's Secretary of Defense Ashton Carter set July 30, 2017, as the date when trans persons would be accepted for enlistment in the armed services. But even before Trump's rage tweets, current Defense Secretary Mattis had postponed that date to January 1, 2018.

In October of this year, DC District Judge Colleen Kollar-Kottelly tossed Trump's trans ban for violating due process and equal protection. She also found it amounted to gender discrimination, which is big (see below). So the DOD came up with a counter offer. What if Secretary Mattis used his discretion to postpone accepting trans troops for some more time, so they could, ummmm, study the matter more deeply?

Yesterday Judge Kollar-Kottelly told Mattis to GTFOH with that nonsense! Those trans kids put in their time at ROTC and deferred basic training until 2018, and the federal government is not going to yank the rug out from under them again just because the president is a vindictive loon. Did Her Honor stutter when she ordered the DOD to go back to the status quo before the President's stupid tweets? SHE DID NOT.

Any action by any of the Defendants that changes this status quo is preliminarily enjoined. [sic]

Do not mess with Judge Kollar-Kottelly!

And lest you think it's just judges making law, check out this jury verdict in favor of a professor fired from Southeastern Oklahoma State University for being transgender.

Maybe that was a little hard to see, so let's take a closer look at the damages awarded.

Shut the front door! $1,165,000. From a jury. In Oklahoma. Even after Jeff Sessions said the Justice Department was A-okay with hating on trans people and pulled the DOJ off the case.

Here's the backstory: Rachel Tudor was hired to teach English at Southeastern in 2004. When she began to transition in 2007, she received immediate pushback from the school. Via WaPo,

The lawsuit alleges that a human resources staffer, who was not named, called Tudor and warned her that the school’s vice president for academic affairs, Douglas McMillan, had asked whether Tudor could be fired because the “transgender lifestyle” offended his religious beliefs. [...]

Tudor’s application for tenure was denied by a dean and McMillan without any reason given, the lawsuit claims, unlike an application by a male faculty member in the English department at the same time who was given guidance on how to improve his ultimately successful application.

In 2011, Tudor received the Faculty Senate Recognition Award for Excellence in Scholarship but was then fired for failing to earn tenure. She sued, claiming that she was illegally fired because of gender discrimination. The Obama Justice Department agreed, and joined her suit. But in October, Sessions pulled out of the case after issuing a memorandum claiming that discrimination against LGBTQ people was NOT sex discrimination under the law.

In fact, the Seventh Circuit has found that discrimination against gays IS sex discrimination -- if a woman is fired because she fails to conform to female stereotypes by failing to fall in love with a man, she has been discriminated against based on her gender. And the federal jury in Oklahoma was persuaded by this same logic to find that Southeastern Oklahoma State discriminated against Rachel Tudor by firing her for being the wrong kind of woman. Which is huge! Because our useless Congress is unlikely to extend non-discrimination protections any time soon, but this country will get a lot more fair if the "because of sex" provision of the 1964 Civil Rights Act is extended to cover LGBTQ citizens. Of course nothing's a done deal until the Supreme Court weighs in. But if juries on the ground in places as conservative as Oklahoma are calling it sex discrimination, the needle has moved appreciably.

So, HOORAY! It is a drop of NICETIMES in an ocean of EVERYTHING IS ON FIRE! Let's see what happens next week at SCOTUS with the Masterpiece Cake Shop case. Fingers crossed!

Please click here to support our Lawsplainers, of which there will be so, so many during the Clusterfuck Administration!