Nick Confessore Doesn't Understand Why Everybody Hates The New York Times. Let's Help Him Out! 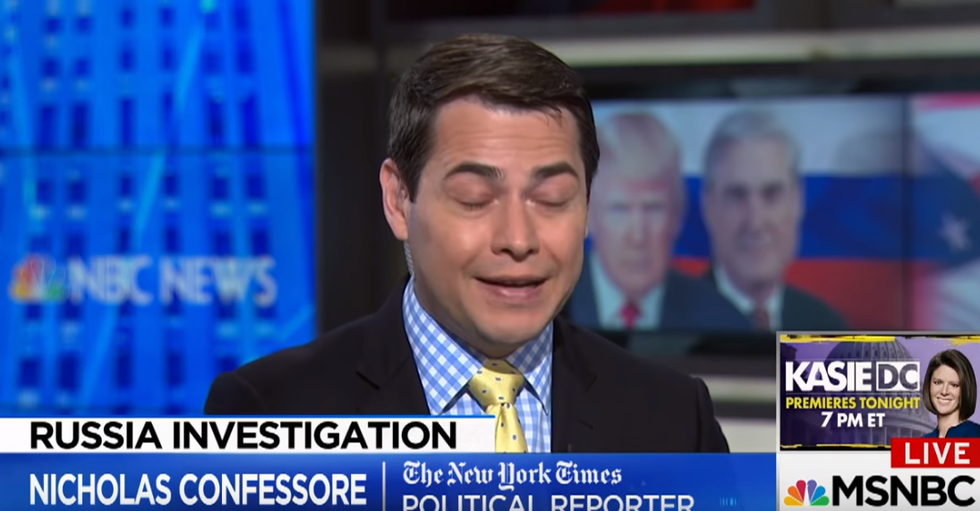 Sorry for the mean screenshot, Confessore, but in our defense, we wanted to do one.

The other day, the New York Times published a piece by NYT reporter Amy Chozick, a self-reflective look at how NYT boned a goat in its obsessive coverage of the emails stolen from the Hillary Clinton campaign and the DNC by Russian hackers and laundered through Russian intelligence front WikiLeaks, none of which were particularly newsworthy (except probably for the hacking and stealing!). When we learned Hillary Clinton had a public and a private position on certain issues, it confirmed she is a common politician who, like all common politicians, sometimes publicly advocates for things she feels are realistically achievable, or that the public is ready for, while privately believing in something much bigger or radical, or that in an ideal world, the result would be a bit different.

In other emails, we learned that Clinton campaign chair John Podesta has some OPINIONS on how risotto is most properly prepared, and that some longtime DNC insiders were weirdly all supporting the one candidate in the Democratic primary who had been a Democrat the whole time HASHTAG RIGGED.

In her piece, Chozick grapples with realizing that she and her paper literally helped Russia in its attack on our election, by breathlessly reporting every little tiny detail of the Clinton campaign/DNC emails as front page news, instead of reserving those column inches to analyze how a hostile foreign power was trying to hijack the election. (Or maybe giving similar column inches to the ONE MILLION TRUMP SCANDALS that came out every day during that time period.)

It’s dizzying to realize that without even knowing it, you’ve ended up on the

wrong side of history. Months after the election, every time I heard the words

“Russia” and “collude,” this realization swirled in my head, enveloping everything. [...]

Editors and reporters huddled to discuss how to handle the emails. Everyone agreed that since the emails were already out there — and of importance to voters — it was The Times’s job to “confirm” and “contextualize” them. I didn’t argue that it appeared the emails were stolen by a hostile foreign government that had staged an attack on our electoral system. I didn’t push to hold off on publishing them until we could have a less harried discussion. I didn’t raise the possibility that we’d become puppets in Vladimir Putin’s master plan. I chose the byline.

In December, after the election, my colleagues in Washington wrote a Pulitzer-winning

article about how the Russians had pulled off the perfect hack. [...] I must’ve read this line 15 times: “Every major publication, including The Times, published multiple stories citing the D.N.C. and Podesta emails posted by WikiLeaks, becoming a de facto instrument of Russian intelligence.”

The Bernie Bros and Mr. Trump’s Twitter trolls had called me a donkey-faced whore and a Hillary shill, but nothing hurt worse than my own colleagues calling me a de facto instrument of Russian intelligence. The worst part was, they were right.

This is honest, and it is gut-wrenching, and it is admirable to see Chozick wrestle with it publicly, in her own paper.

Chozick's NYT colleague Nick Confessore has a different opinion, and it is "NUH UH." He expounds on that thesis in a long thread, which you may read by clicking on this tweet:

As a former cubicle-mate of @amychozick and an author or co-author on some of the @nytimes coverage of the hacked Podesta and DNC e-mails, I have a different view of our paper's decision to publish stories based on those e-mails.