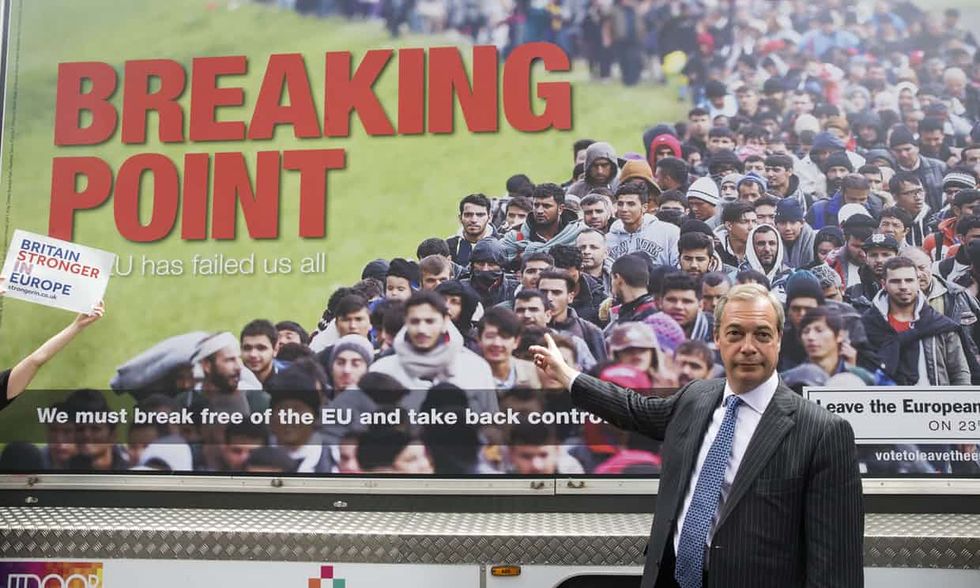 There is never a bad time to note how much of a weaselly sheepfucker Nigel Farage is. He's the British answer to the question "what would happen if you put Sarah Palin in charge of a racist third party." Besides Ted Cruz and Tony Abbott, he's got the most punchable face in the world. Cher once mixed him up with Tony Abbott, even, that's how much of a sentient prick this dude is.

Besides just being the biggest waste of medical care ever conceived by man, good old Nigel is also an unrepentant racist. He once said that he'd be nervous living next to Romanian children and then when someone asked if he'd be nervous living next to German children, he replied, "you know the difference." What a witty fucking rejoinder that was, huh?

Oh, and there's THE WHOLE BREXIT THING. For those of you not familiar with British politics, it's that ultimate cringing lickspittle Farage who led the charge to build the wall keep migrants from taking all the jobs. Nigel is a blithering moron, you see, and he truly believes that the existence of people who aren't white threatens his safety somehow. There is nothing in the world he won't blame immigrants for, including that time he was late to a fundraiser because, no shit, there was traffic on the M4.

We asked a British person how best to describe Nigel.

Nigel possesses such an utter lack of rhetorical ability that he can't think of words that aren't racist slurs to describe Chinese takeout. He's afraid of languages that aren't English -- and that's not even hyperbole. He's said multiple times that he doesn't like hearing languages that he doesn't know in public places. The fact that anything he says makes sense to anyone is an indictment of education in the Western world, because we are clearly turning out whole nations of people so incredibly lacking in critical thinking skills that it's a wonder they haven't Darwined themselves en masse in some kind of jackass Rapture.

He got himself uninvited from Britain after essentially pulling some Donald Trump shit, retracting it all the day after the election and then quitting to spend more time with the oily pulsating quivering ball of opaque goo that he calls a brain (having mistaken a Halloween jello mold for an actual model just after misunderstanding the lesson of the Scarecrow during a screening of the Wizard of Oz hosted by a white nationalist group in Georgia who thought it was something more their lane because it had a "wizard" in it, one assumes). He isn't on record talking about pussies or anything but he's exactly the kind of brown-nosing smarmy priggish fuck that would make up stories to fit in with the bigger bully kid he was sucking up to. OH WAIT HE DOES THAT FUCKING CONSTANTLY.

So anyway, he seems to have gotten jealous that all the COOL Nazis were getting profiles written about how fucking dapper and normal they are, so obviously his next PR move is to tell everyone that it's the Jews we should be worried about, really, not Russia, because that's the part of this year we're at, where Nigel fucking dickwad Farage finally comes out with it for once in his superfluous existence. The low-rent Alex Jones said on his radio show:

There are other very powerful lobbies in the United States of America, and the Jewish lobby, with its links with the Israeli government, is one of those strong voices.

There are about 6 million Jewish people living in America, so as a percentage it's quite small, but in terms of influence it's quite big.

We here at Wonkette's International desk would never pass up an opportunity to call Nigel Farage a baboon's ass dressed up in people clothes but it is important to also note that he was Britain's MEP (Member of European Parliament) for a while and he's still allowed on legitimate political TV and people call his bullshit and poisonous tripe "political views."

So, to review, we are still having a national debate on the strategic efficacy of Nazi-punching while the Nazis are: running people over with cars, shooting people on the street, having conferences in DC, blaming the world's problems on the Jews openly, and screaming Nazi slogans in public.

Nigel Farage's scabrous pestilential wankery has no place in the public square, or at least wouldn't in a world in which reality wasn't an entirely fungible thing. Instead we live in this shithole, so we recommend you just crack the bourbon and get on with it.