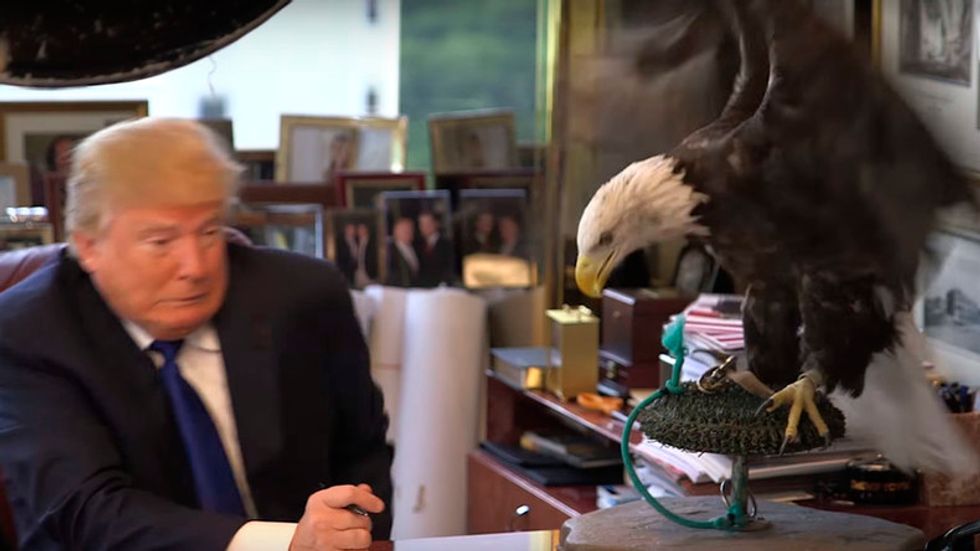 This bird of prey was an excellent judge of character.

Yep, the entire team was banished from Donald Trump's America Party because quite a few of the players "disagree with their President," who is the boss of them now, and indeed of all of us, and we like it very much. Christ, don't these people understand the simplest thing about America, where Trump rules us all? Such lèse-majesté was not to be tolerated, because America is about standing when told to stand, putting your hand on your heart, and singing the national anthem as loudly as possible. This is, as we all know, a land of mandatory displays of patriotism, and if you dare suggest that it's not truly equal, you may as well self-deport, commie.

It's also worth noting that no Eagles players actually took a knee during the anthem in the past season. For Crom's sake, the Moonie Times even suggested that was a good reason for True Patriots to root for the team. But several of them, including most of the star players, had said they had no interest in appearing at Trump's slob party, so instead of holding a slob party with an embarrassing lack of football stars, Trump told the remainder of the team to just fuck right off.

Still, such a refreshing change of pace from Trump I's terrible not-even-American predecessor, whose name it is now illegal to mention. That guy probably would have said something stupid about free speech or the right to protest, even if it makes Fox News sad. We honor Trump I for freeing us from such divisiveness! (See related celebratory ode, "Hymn to The New Unity") Ah, and speaking of the Dear Leader's official news outlet: Fox's story on the Unpersoning of the Philadelphia [name now redacted by edict] team showed players kneeling during a prayer, and not during the Anthem at all, because that's just how anti-American sportsballers are.

Fox News uses pictures of Eagles players praying to pretend they were kneeling for the national anthem (no Eagles player actually did) pic.twitter.com/BbgzmyGdpn

Besides, as everyone knows, these well-paid entertainers -- who, unbelievably, still have jobs (for now) -- have absolutely nothing to protest in Trumpmerica, where the police are heroes who proudly protect EVERYONE, even though some troublemakers fail to understand that fact, and also hate the troops. Among other media outlets just begging to be shut down is Deadspin, which carried newly released video of police using reasonable force on NBA player Sterling Brown. After taking him down, one of the cops stood on Brown's ankles to make sure the athlete didn't kick him, although Brown points out he's lying perfectly still:

Other videos show a second cop singing cheerfully about the overtime pay he'll get for serving America during the incident, and two officers slowly realizing maybe this whole thing might not look so great:

A squad car video shows an officer calling in to ask if he’ll have his request for overtime approved, before then singing “money money money” to the tune (roughly) of The O’Jays’ “For The Love Of Money.” In another video from the inside of a squad car, two officers seem to realize that the unnecessarily forceful arrest of an NBA player would make the MPD look bad. “The bureau is coming out for this? ... We’re trying to protect ourselves,” one officer said. “Because he plays for the Bucks, and if he makes a complaint, it’s going to be a [redacted]. And then any little [redacted] thing that goes wrong is going to be, ‘Ooh, the Milwaukee Police Department is all racist ... blah, blah, blah.’”

See? The cops recognize that racism isn't really a concern, and so does Donald Trump. Also, that "Money" song sure is what America is all about, just like "Born in the USA" is a patriotic anthem! Do you know how much Trump I's tax cuts are doing to make America great? So very much that it's pissing off the libs at the UN, that's how much! Truly worth standing and singing about.

In any case, the big America Celebration today will go forward, with "diehard Philadelphia [redacted] fan" Kellyanne Conway planning it. There will be the Trump Marine Band to play the Star Spangled Banner as loudly as humanly possible, and the Trump Army Chorus to sing it loudly and proudly, too.

And whoever stops cheering first will be shot.

Wonkette has no ads and is solely supported by YOU!