No, GM Is Not Losing $49K On Every Volt; Reuters Just Fails at Basic Business Math 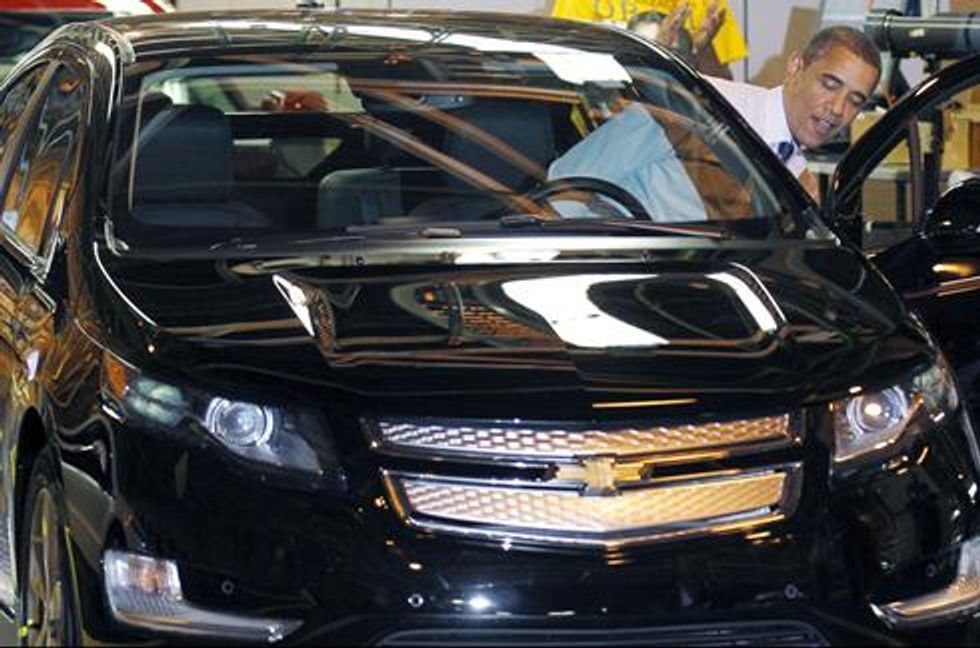 If there's one characteristic that distinguishes conservatives from liberals, it's business acumen, right? Libruls may occasionally be able to sell some patchouli-scented hemp-based iPod cozies at the Lesbian Sisterhood crafts fair, but conservatives are the folks who REALLY understand how Bidness works! That's pretty much the premise of every Republican campaign in the last 30 years, after all. So how is it that when a journalist made a pretty obvious error in a story, the supposedly business-savvy folks in the right-wing blogosphere went nuts passing on the story's erroneous conclusions?

Here's the skinny: A Reuters story on Monday featured this shocking lede:

General Motors Co sold a record number of Chevrolet Volt sedans in August — but that probably isn't a good thing for the automaker's bottom line.

Nearly two years after the introduction of the path-breaking plug-in hybrid, GM is still losing as much as $49,000 on each Volt it builds...

ZOMG, said the wingnutosphere, Government Motors (get it? get it?) is losing tons of money -- our money!! -- on every single one of those horrible cars that nobody wants and that Obama's socialist vehicular commissars forced GM to build as a condition of getting a bailout with OUR MONEEEEEE!!!!!!!

As this International Business Times analysis points out -- with the kind of patient tone one would use when telling a five year old that, no, the department store's escalator will not eat your feet -- the Reuters loss-per-vehicle estimate is based on crappy math that NO ONE IN BUSINESS WOULD REALLY USE. (Caution: Math follows. Do not be afraid. We understood it, and we were English majors.)

Reuters derived its loss-per-unit estimate by dividing the total development cost for the Volt (between $1 billion and $1.2 billion) by the number of Volts sold to date (about 21,500 so far), then adding in the estimated production cost per car ("between $20,000 and $32,000, a wide margin to be sure") and subtracting the price for which each Volt sells (base price $39,145), which gave them that $49,000 loss figure.

Unfortunately, Reuters screwed the mathematical pooch in that first bit of ciphering:

The issue with Reuters' math, though, is that it only takes into account the 21,500 Volts sold so far, as if GM would never sell another one. If that is taken to be true, then each Volt sold has cost GM around $55,000 in development costs. However, each Volt sold spreads out the development costs incrementally, pushing down the R&D cost per unit. GM has acknowledged that it has not yet sold enough Volts to break even, but it suspects that it will reach the break-even point by the time the second- generation Volt is introduced onto the market in about three years' time.

Once again, we must emphasize that we are mushy-headed liberal arts majors, not business majors, but it seems like a pretty major fail to assume that the development costs of a new technology represent an irrecoverable loss. And the Reuters story even acknowledges (about halfway through) that the average per-unit costs for "development and tooling costs...will, of course, come down as more Volts are sold."

But look at the capitalism experts at sites like The Blaze, or Free Republic, or Townhall, or the hideously named "Twitchy.com" -- The typical comment goes something like this: "They're losing $50K per car, but don't worry, they'll make it up in volume!!! HAW HAW HAW!" Um. Yeah. Actually, that is how development costs work. We thought you guys understood business?

The decision to develop the Volt, by the way, was entirely GM's, and the program began in 2007. Just another example of time-travelling Obama interfering with private industry, we suppose.

Strangely, it seems like maybe the crazy libruls might understand manufacturing a bit more clearly when it comes to this story:

As the blog InsideEVs pointed out, rather sarcastically, in response to the Reuters feature, "In a related news item, I heard that Ford has delivered the first dozen C-Max hybrids, and it cost the company about $500 million to develop the program, and therefore Ford is losing $41,666,667 on every copy they sell."

So remember, conservatives understand how businesses really work. And math is hard.