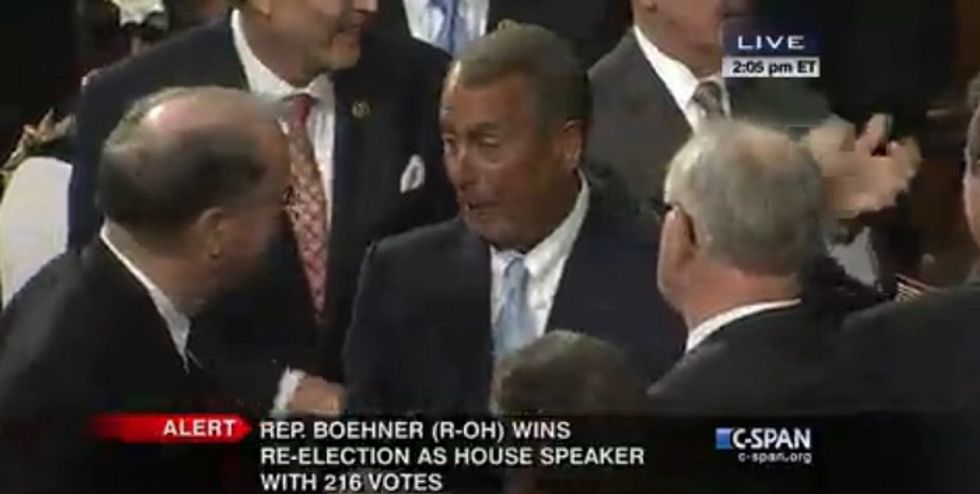 Fresh from beating off a half-assed coup from the wing of his party that eats roadkill and shits conspiracy theories, Speaker of the House John Boehner reveals in Politico that reports that he looooves to fellate the president are wildly overstated:

Boehner, the pitchman who values listening, considers Obama too senatorial, a smart guy who lectures. Two former House leadership staffers who spent a lot of time around the speaker say it is not uncommon for Boehner to roll his eyes during one of Obama’s long spiels, set down the receiver on his desk with Obama’s muffled voice still droning over the line — as the speaker lights another Camel or gestures to an aide to hand him a file.

Without skipping a beat, he will pick up the phone just in time to register a standard "uh-huh" or "I’m not sure about that, Mr. President."

Haha okay wow. Waaait a second. What is this, Mean Girls? The remainder of the piece talks about how Obama and Boehner supposedly like each other more than they're letting on. But I can't really take the notion of Oompa Loompa here reaching a grand bargain with the White House now that I know he literally smokes Camels and makes mocking faces while letting Obama speak into his desk. Maybe he's even pantomimed cocking a shotgun and blowing his brains out too.

As contemptuous of the president as Boehner is, though, he probably hates certain members of his caucus more for daring to oppose his re-election as House speaker. In the ominously titled report "John Boehner is Moving Swiftly to Punish His Enemies,"Business Insider writes that Florida Reps. Daniel Webster and Rich Nugent have already been booted from the Rules Committee. Further retaliation may be headed the way of Virginia Rep. Scott Rigell, North Carolina Rep. Mark Meadows, and Indiana Rep. Marlin Stutzman.

Boehner's folks are portraying this as a means to get the fringe people back in line so that a GOP Congress can get back to work. But again, the difference between the self-declared responsible Republicans isn't that one of the two factions is more reasonable than the other. The Tea Party crowd just doesn't really know how to keep all that contempt bottled up inside long enough to wave for the cameras. Boehner will happily pretend that he's listening long enough to plant a dagger in his enemies' backs. Or, you know, gut food stamps.

While Boehner has managed to survive this round handily, conservative members still have a solid two years to continue roiling against their leadership. As Boehner tries to project stability, he'll also have to deal with a right-wing caucus eager to show its wingnut bona fides by putting up petty squabbles on any hint of collusion with the White House. Both of these sides are equally horrible, meaning that any accomplishments of this retrograde House will be regrettable at best. John Boehner hates everyone and Congress is so fucked.