No One Cares About Candidates' College Degrees, Wingnuts Upset Anyway Because It Is A Day 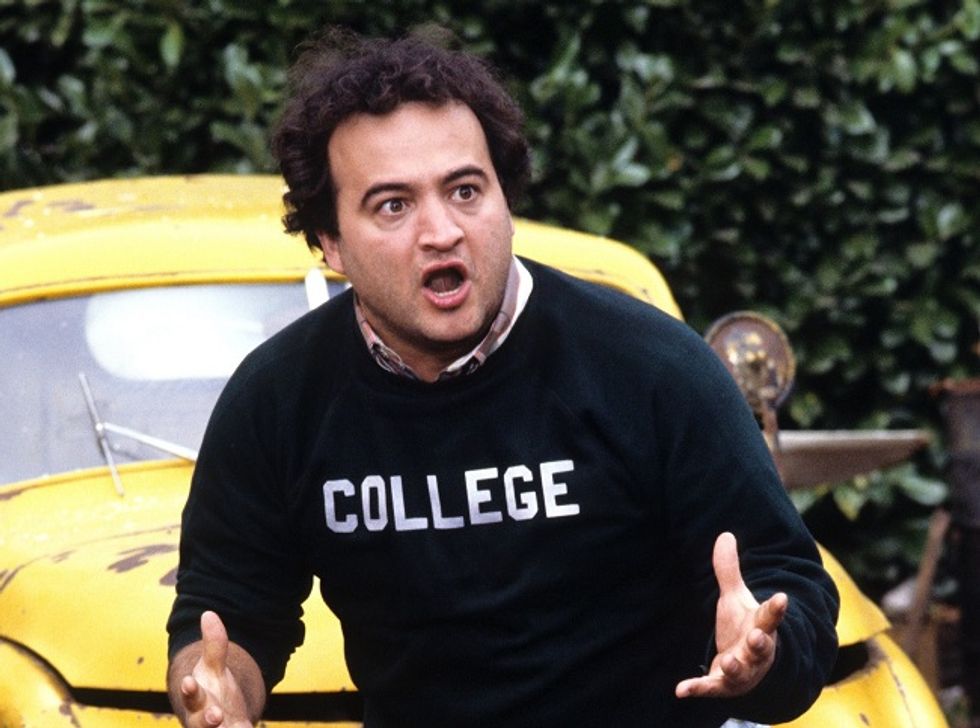 Sweet merciful Yahweh, are we really going to have to spend the next year and a half debating the merits of a college education for presidential candidates? Apparently we are, if the recent hooting over Rand Paul and Scott Walker lacking bachelor’s degrees is any indication. Count us among the camp that thinks not having completed an undergraduate degree is irrelevant to one's qualifications for the presidency. Our last president had degrees from two Ivy League schools, and he had the intellectual firepower of a mangled squirrel being grilled for supper on the engine block of a ’73 Matador.

There have, however, been a couple of outbreaks of wingnut hypocrisy and stupidity over the issue, which we feel compelled to laugh about.

First, Rand Paul stepped on his own dick last week by claiming he had biology and English degrees from his undergrad years at Baylor University. Presumably he earned these degrees in between doing bong hits and worshipping watery Buddhists. But no, it turns out the Hairpiece That Ate Kentucky never graduated college. He left after three years, but still scored so high on his medical school entrance exams that Duke accepted him to med school anyway. Duke also once gave Richard Nixon a law degree, so the lesson is clearly that everyone should steer clear of anything connected to Duke for all eternity.

Anyway, Rand Paul, there are plenty of reasons why you would make a terrible,terrible,terrible president. Your lack of a bachelor’s degree is not one of them! So just don’t lie, and we’ll talk about all the relevant reasons we don’t want you anywhere near the Oval Office. Even as a tourist.

Then there is dirtball Scott Walker, who we already know harbors some weird animosity toward colleges. Walker was 34 credits shy of graduating from Marquette when he left the school to take a job with the Red Cross and never went back. This obviously does not make Scott Walker a bad governor -- it is everything else he has done as governor that makes him a bad governor.

The issue of Walker’s education came up last week after he “punted” on the question of whether he believes in evolution. This has led to the spectacle of wingnuts screeching nearly nonstop about the liberal media being all elitist and snobby about a salt-of-the-earth good Christian like Scott Walker daring to not finish his college education while giving President Oblahblah a pass on sealing all his undergraduate records, yadda yadda INPEACH!

All the screaming obscured two points about the whole spectacle. One, the evolution question was asked by an audience member at a London think tank, not the editorial board of The New York Times or even apparently a member of the American electorate. And two, as best we can tell, the only public figure who used it as a cudgel to beat up on Walker was Howard Dean, who should really know better by now than to open his mouth in public anyway. Dean raised the issue on “Morning Joe” and promptly got smacked down by Joe Scarborough and Willie Geist, which is a little like a boxer getting smacked down by a couple of overexcited Labradoodles.

The whole thing led to some very confused flip-flopping at National Review and this remarkable column by Glenn Reynolds, the old Instapundit himself.

But the college degree — especially a degree from an elite school — has become an entry-level ticket into the educated mandarinate…[A]n America that once prided itself on real-world achievement and practical good sense now runs largely on credentials.

Jesus H. Christ banging a co-ed in his frat house. The Instaputz himself is a tenured professor at the University of Tennessee-Knoxville with a law degree from Yale. Yet apparently with a straight face, he manages to write this tripe recasting a college education as something that no one who is not a sneering liberal elitist should put any stock in. A real man of the people, the Ol’ Perfersser.

We are old enough to remember when a higher education was a worthy goal for people in this country, and intellectual curiosity was a leadership trait to be prized. But that was before the universities were all taken over by disciples of Vladimir Lenin and began turning out Marxists at an alarming rate. Meanwhile the campus conservatives are banished to distant library stacks, where they meet late at night to commiserate over dusty Adam Smith tomes that haven’t been opened since the Wilson administration. The poor oppressed conservatives.

Holy flurking shnit. If anyone needs us, we’ll be deleting our student loan officer’s voicemails from our inbox.