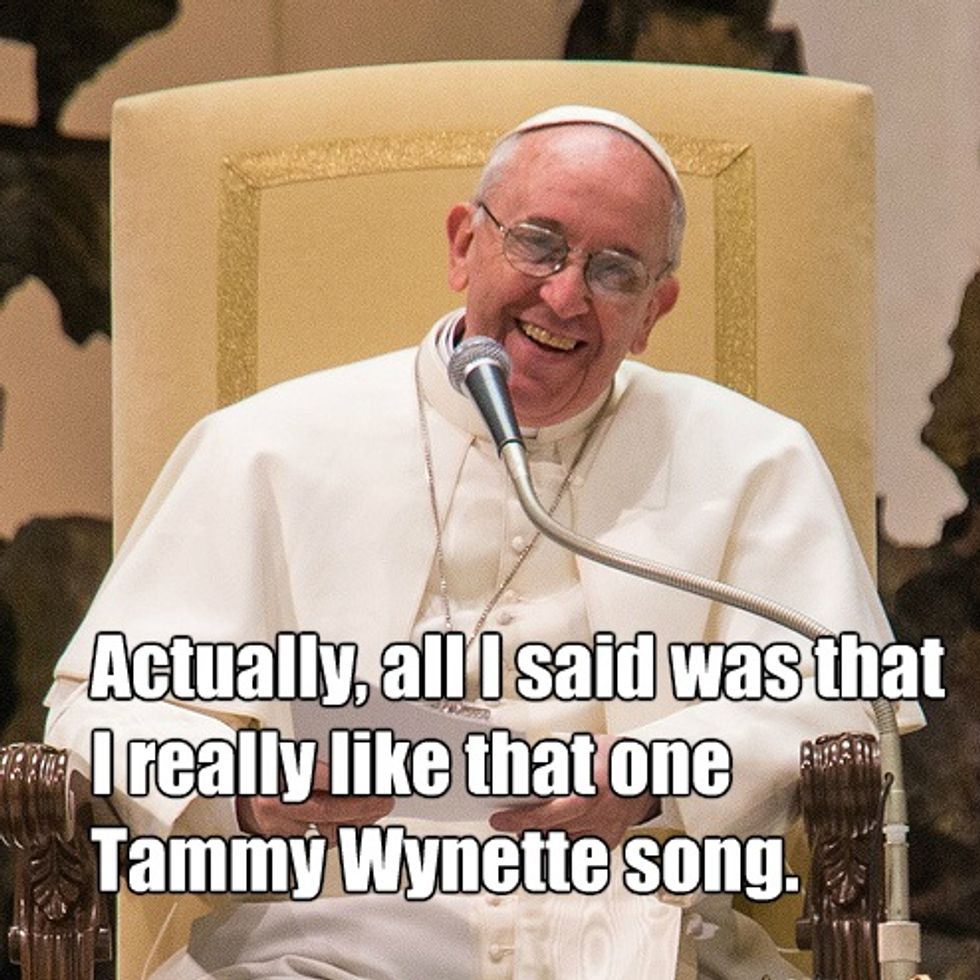 Reports are sketchy and confused, but either New Pope just tossed out centuries of dogma and tradition on divorce, or somewhere in between Argentina, Italy, England and several different publications in at least three languages, somebody or several somebodies really got some details wrong. It's kind of fun, at least, that with this Pope,nobody's quite sure. (Our money is on "confusion." The smart money is always on confusion.)

So what may have happened, according to Damian Thompson in the Telegraph, is that on Monday, Pope Francis made a phone call to Julio Sabetta, a gentleman in Argentina, to answer a letter sent by the man's wife, Jacquelina Lisbona, who had written to ask New Pope if she could take communion again -- the couple has been in a civil marriage for 19 years, and had two daughters together, but Mr. Sabetta had gotten divorced before they were married (and just to throw in some added confusion, the earliest reports said that it was Ms. Lisbona who'd been divorced). Now, this is where dogma comes in -- Catholics Do Not Get Divorced. OK, they totally do, but they don't get remarried. OK, they do, but if they get remarried, they can't do it in the Church, and they can't take communion after, because it gives God a sad because in the eyes of the Church, they are Living In Sin. Supposedly, Pope Francis told Sabetta, "Ya sure, you betcha, tell her to go for it" or words to that effect, which would be pretty giant news if it actually happened, because Catholics can only get married just the once (unless they get an annulment, which is rare-ish). If the story is true and the Pope actually let a bit of changing doctrine slip out, it would be a big effin' deal for Catholics, possibly bigger than Obamacare even.

Or it may be nothing -- for instance, it's possible that the first marriage -- whoever's it was -- was not a Catholic marriage, but a civil ceremony, in which case they were just living in sin all this time and can still have a proper Catholic ceremony later. Or maybe the story's gotten garbled between the initial "Hey, the Pope called us!" post on Facebook (in Spanish), the follow-up reports in Argentine media, the story in Italy's La Stampa, and/or Damian Thompson's Telegraph piece. There are a number of skeptical takes out there, like for instance this one from the National Catholic Register, which questions just about every aspect of the story, including whether the call happened at all, and anticipates zero changes in Church doctrine. See also this similarly-skeptical account from Father Z, who notes that it takes a heck of a lot more than a phone call to change Church doctrine.

And then there's this story, from Religion News Service, which notes that the Vatican confirmed to CNN that the call did take place, BUT that Rev. Thomas Rosica at the Vatican press office would say not a single thing more, because "It’s between the Pope and the woman." And that would appear to be pretty much the last official word we can expect, because Francis doesn't phone and tell. Even though Sabetta and Lisbona did.

And there you have a little glimpse into the thoroughly crazy world of Catholics 'n' Divorce, where Lisbona is barred from one sacrament, communion, because she did another sacrament, matrimony, all wrong. According to dogma, she's an adultress, and lucky for her the Church got rid of stoning. Does this phone call indicate Big Changes in the works? Lisbona said that New Pope told her to go ahead and take communion, and that he was "dealing with the issue" of whether divorced/remarried Catholics can take communion, but that's where the skepticism is strongest, and it looks like the Vatican isn't going to say anything more about it. Unless they do.

Yr Dok Zoom was raised Catholic, and his decision to get married to a Lutheran in a ceremony performed by a Justice of the Peace in a Unitarian meeting hall very nearly caused his mother, a Taliban Catholic, not to attend at all -- she was pretty sure she'd need a special dispensation from her Archbishop or something. Happily, her parish priest told her to knock it off and go to the wedding. After which she spent the remainder of Dok Zoom's first marriage reminding him that he was only living in sin, and that it was never too late to get a divorce and find a nice Catholic girl.

In conclusion, religion is weird, the end.

Follow Doktor Zoom on Twitter. He sometimes wonders what his mom would have thought of his second marriage to a nice Jewish gal...