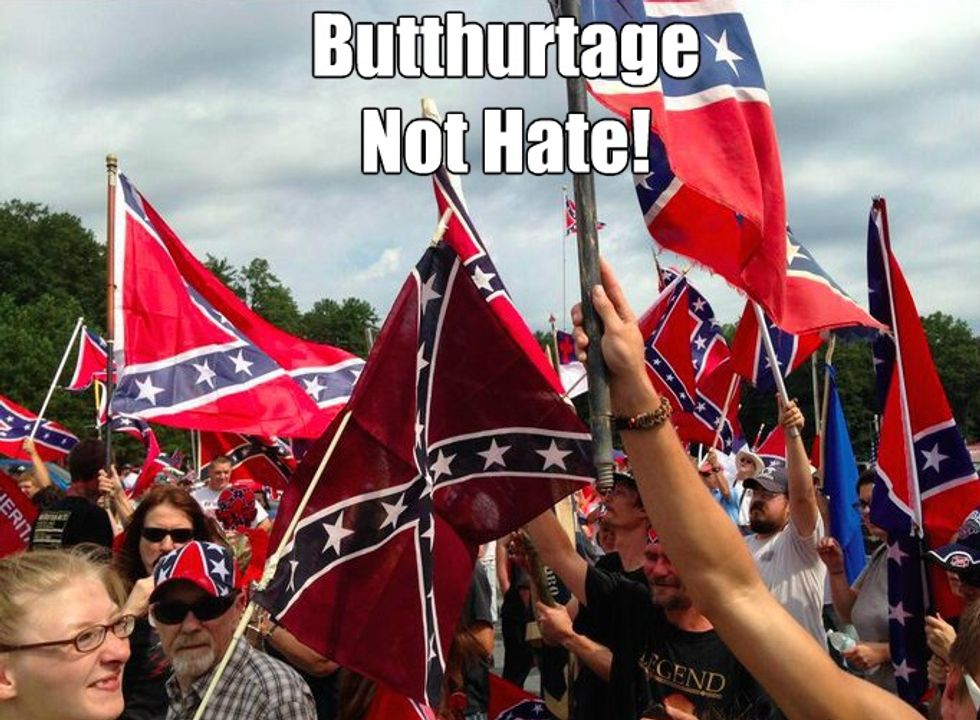 So a few hundred supporters of the Treason Flag rallied at Stone Mountain, Georgia, the (re)birthplace of the modern KKK, and despite the organizers' explicit warning that there should be "no racial slurs," since the Liberal Media would be watching, it turns out that some folks just couldn't help themselves, but only because they were provoked by agitators who were offensively black and/or liberal communist scum.

Talking Points Memo points us to this memorable bit of journalism by rightwing doofus Jim Goad (who may have been named by Dickens) at that last bastion of the white supremacist intelligentsia, Taki's Magazine. Goad knows who the real haters are: those who used the Charleston shootings as an excuse "to launch a full-on cultural purge of all Confederate symbols by those who hate what they insist those symbols represent. And they insist those symbols represent HATE. And they hate that." And who are the real victims of this cultural genocide? Poor whites who have had everything taken from them by the Liberal Elites:

They wore their history—in particular, their intergenerational defeat and ongoing public humiliation—on their faces. Fuck those absurdly wealthy and culturally hostile scalawags at the Southern Poverty Law Center -- here was the true Southern poverty, the generations of want and suffering and being scapegoated and trying to scratch out an existence in a conquered land where their conquerors seek to scratch them out of existence.

One hundred and fifty years after the Civil War ended, here was a perpetually maligned demographic that had witnessed almost everything, including their dignity, being stripped from them.

Somehow he got through the whole piece without invoking "po' white trash," but he did note that the "the professional carpetbagger class was trying to take away that flag, which is all that many of them have left." And again, the real haters are the sneering PC liberals who mock the suffering inheritors of the Lost Cause. Goad dutifully notes that the crowd firmly ejected one guy wearing a KKK insignia on his hat, chanting “KKK! Go away!" And also that there were some really hateful counter-demonstrators, "small pockets of white and black progressives who showed up to taunt the crowd. Never mind that this is roughly as rude as the Westboro Baptist Church showing up to taunt fallen war heroes."

The man has a gift for analogies.

In any case, Goad finally managed to document some racial slurs, though he makes it clear that The Blacks provoked it by being weird-looking:

And then, finally, came what the party-crashers were looking for. A genetically challenged-looking ginger male in a pink baseball cap called a black girl a “greasy monkey nigger bitch.” The black girl in question, who was wearing a shirt celebrating her “blackness,” began howling and screaming and clawing and swinging like a Jerry Springer guest before cops were able to restore order. Her friend, a portly black woman with a giant black leather earring in the shape of Mother Africa, shouted at someone in the crowd, “What if I called you a greasy inbred stringy-haired cracker?”

“I’d be offended,” they replied.

“But ‘cracker’ isn’t offensive!” she insisted.

“Shouldn’t that be for the crackers to decide?” I asked her. She either didn’t hear me or she didn’t want to answer the question. Maybe she simply assumed it was for her to decide what was offensive and what wasn’t.

Those blacks are so tetchy. In any case, we urge you to read Goad's entire profile of the rally -- it's sort of what you might get if you crossed Lester Maddox with a version of Hunter S. Thompson who'd been thumped on the head several times with a large cast iron skillet.

Also, too, the Atlanta Journal-Constitution recorded some beautiful expressions of heritage-not-hate in action, like this snippet of conversation about Southern Heritage between Treason Flag supporter Allan Croft and a group of young black gentlemen:

Croft blamed integration and the civil rights movement on “Communist Jews” and said accused Charleston shooter Dylann Roof “should have went to the synagogue, because that’s the enemy of all of us.”

See? Not a single racial slur in there. That conforms with the guidelines, we'd say. And then there was the League of the South member named "Jimmy," who declined to give his last name to the paper. He spoke to the crowd about the mission of the LOSers without mentioning that one of their primary goals is a new secession from the USA. "Jimmy" explained to the AJC's reporter that he didn't need to spell that out: “I feel like the people here are smart enough to put two and two together.” He also explained that white people in the South are an endangered species, and need their own homeland or something, because

OK, maybe not the 13th, 14th, and 15th, but you get the idea. He's probably not so hot on a few others, but he'll leave the details for later, after white people have been saved.