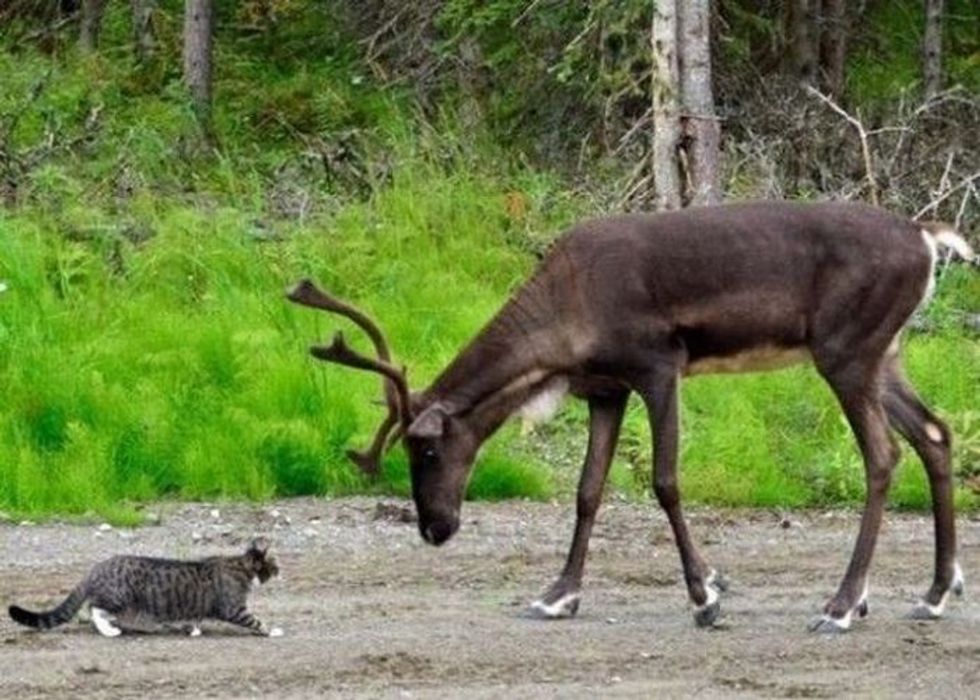 Back in March, when we started our project of profiling all 34 U.S. Senate races in the 34 weeks until November's election, we were shocked, shocked to see that Alaska's Lisa Murkowski didn't have any Democratic challengers, which seemed awfully irresponsible, even fatalistic, of Alaska Dems, but then we noticed that there was still a filing deadline of June 1. And by golly, a bunch of people went and filed to run against Murkowski, the Republican who won reelection the weirdest possible way back in 2010.

You see, Murkowski was originally appointed to the Senate in 2002 to serve out the remainder of the term of her daddy, Frank Murkowski, who'd gone and gotten himself elected governor of Alaska. Nothing weird about that, Alaska voters decided, and so they reelected her in 2004. Then came the Tea Party Electoral Fuckquake of 2010, and Murkowski lost the primary to compulsive liar,jerkwad, and Sarah Palin pal (but we repeat ourselves) Joe Miller. In a bold gamble that Alaskan voters as a whole were less shitheaded than Alaskan Republican primary voters, Murkowski decided to run a write-in campaign for reelection. Murkowski's campaign faced the difficult challenge of teaching Alaskans how to find the write-in portion of the ballot and write her name correctly. It probably didn't help that her first write-in campaign ad -- which was otherwise cutely retroish -- misspelled her name:

Wonkette readers tried to invent clever visual aids to help Alaska voters remember Murkowski's name (most of them involving pubic wigs, because you're that kind of people), but that turned out to be unnecessary when a judge ruled polling places had to provide lists of all write-in candidates. Even with that, some people still had trouble getting it right, so even with "Total Write-in" winning against "Hairface Teabagger" at the end of election night, the state still had to decide whether "Merkin + Cow + Ski" ballots would count. The Anchorage Daily News said "Minor misspellings are probably OK but simply writing ‘Lisa M,’ for example, could be a problem.” And "Mike Gravel" would be right out. Joe Miller tried suing the state to prevent anything but exact spellings from being counted, because he claimed lots and lots of people who otherwise would have voted for him had announced they planned to "deliberately incorrectly write-in a variation of ‘Murkowski’ as a protest." Uh-huh. Murkowski made a bit of history by becoming the first sitting U.S. Senator to lose her party's primary then win reelection as a write-in candidate. (Trivia: Strom Thurmond won his first term in the Senate as a write-in, in 1954.) And Joe Miller kept trying unsuccessfully to sue his way into having enough votes, so we laughed at him more. Then we laughed even harder at David Broder for thinking Murkowski's victory meant the 2010 midterms were about nonpartisanship.

So how's she done as a senator? She's supposed to be a "moderate," which these days means she voted for war on ladyparts but felt really bad about it, and also was OK with gays getting married as long as they didn't do it right in front of her. She took the radical (except in Alaska) stance of being OK with officially designating that big mountain up there as "Denali" instead of as "Bob Dolehill." She also dared to suggest that one can be a Republican without eating Chick-fil-A at every meal. Oh, and she complained mightily in 2014 when Mark Begich ran ads suggesting that they got along well, because, ew, gross Democrat cooties. Murkowski was one of just a handful of R's who didn't sign Tom Cotton's love note to the ayatollahs, so good on her for that. After Antonin Scalia was found nailed to his perch, Murkowski initially sounded like a sane person, saying that whoever President Obama nominated "should get a hearing," but then, after a sharp tug on her leash from Republican leadership, deciding instead that Obama had better not defy "tradition" and nominate anyone, and if he did, then by golly, "I believe extraordinary circumstances give the Senate every right to deny the nominee an up or down vote.” In April, Murkowski did meet with Merrick Garland, for what little it was worth. The Senator and the eminently qualified nominee

talked about state issues like access to public lands and gun rights. She found his knowledge of Alaska wanting, she said. “I educated him, I think,” Ms. Murkowski said Tuesday.

So who have the Dems scraped up to run against Murkowski in what Ballotpedia rates as a "safely Republican" race? Three Democrats have filed for the August 16 primary: Edgar Blatchford, a newspaper owner and former mayor of Seward who switched his registration from Republican to Democratic just days before filing to run; Ray Metcalfe, an Anchorage realtor who once tried to start a "Republican Moderate" party that would be free of influence from the religious right; and Richard Grayson, who is -- we guess this is legal somehow? -- simultaneously running in Alaska's Democratic primary for Senate and as the Green party for U.S. House District 8 in Arizona. Yeah, we had to read that more than once, too.

Of the three, only Metcalfe and Blatchford have campaign websites, and only Blatchford's has any content on it; Metcalfe's has some pretty scenery and a cheerful "Welcome: Watch this space!" Blatchford's "Issues" page suggests he's in favor of Progress, and also Innovation. His apparent disdain for verbs is matched by an enthusiasm for Needless Capitalization:

Supporting the cores of small business and industrial businesses necessary to producing within our country the innovative products necessary to meeting the National and Alaskan needs for a 21st century in Transportation, Communications, and Energy with the specific focus of in-state use of Natural Gas.

Blatchford told the Midnight Sun blog that he'd switched parties out of frustration with Republican obstructionism, and noted that he'd endorsed Barack Obama in 2012. He said he was especially annoyed by Senate Republicans' refusal to confirm over 100 judicial nominees, and by Murkowski's being in "lock step with Mitch McConnell." He also says the prospect of Donald Trump as president is "just a awful [sic] thing to stomach." He's still getting the hang of his new party, though -- in a recent blog post, he says, "I Support The Democrat Plan to Keep Social Security Strong." We left him a note to mention that a lot of Dems are left cold by the use of "Democrat" as an adjective.

Ray Metcalfe is on his third run for Congress, and seems like a nice muckraker with a history of taking on oil companies and their connections to Alaska politicians, which might explain why he hasn't done a lot of winning. Metcalfe made a strangely angry yet soporific video on oil companies' excessive profits a couple years back, and says his top issue is getting money out of politics; he calls himself a "BernieCrat," or at least he did shortly after Bernie Sanders won the Alaska caucuses. We wish we could find more about the guy, but he doesn't exactly have what you'd call an aggressive web presence. On the plus side, on his Facebook page, he at least doesn't capitalize weirdly.

Then there's Richard Grayson, who appears to just run for office for shits and giggles. He seems to have filed for candidacy in Alaska to goad other Democrats to file, and has no discernible campaign in the state. He did the same thing for Wyoming's single, at-large House seat in 2014, but no other Democrats bothered filing, so he was the official Democratic nominee by default. He refused to take campaign contributions, since they'd be "a waste of money." He lost to Republican incumbent Cynthia Lumis, but managed to get 23% of the vote without leaving his home in Arizona. In 2012, he got 39 votes running in Arizona's Green Party presidential primary, coming in third place despite his endorsement from the Tucson Weekly, which liked "his plan to deport Republicans back to the 18th century" as well as his "demand that Pinal County Sheriff Paul Babeu be nicer to his ex-boyfriends." We certainly can agree with that. In 2012, a brief profile of Grayson quoted a statement from his 2010 run:

Most of you who live in Arizona’s Sixth Congressional District — the East Valley cities of Mesa, Chandler, Gilbert, Apache Junction and Queen Creek — are ignorant morons. That’s why I don’t give a fuck if anyone votes for me or not. That gives me the freedom politician candidates don’t have. I can say what I feel and do what I think is right without having to care about whether the unwashed masses agree. Maybe I’ll get 100 votes or so, votes for which I’m grateful, but in the end, it doesn’t matter.

Grayson himself left the only comment on the piece: "Who the fuck told you to write about my campaign?" He seems nice, and we look forward to hearing from him, too.

In the Republican primary, Murkowski is facing a bunch of people who seem determined to embody the label "also-ran," most presenting themselves as the real conservative alternative to Murkowski but unlikely to be the next Joe Miller, thank Crom. Encouraged by the 2014 victory of independent Bill Walker as governor, Anchorage immigration attorney Margaret Stock thinks she might benefit from an anti-Washington, anti-things-as-usual independent campaign. A former Republican, Stock certainly has the prettiest website, with some pow-wham comics style graphics on the homepage. She's the first winner of a MacArthur "genius" grant we've ever seen run for high office, and a lot of her professional work has been on advocating more rational immigration policies as a means of improving national security. Her "Issues" page says she's pro-choice, pro-LGBT, in favor of diversifying Alaskan energy resources beyond oil and gas, a Second Amendment supporter who nonetheless supports commonsense regulation, and in favor of Medicaid expansion under the Affordable Care Act. She sounds nice, only actually nice, not the way we usually say that here. She could be too smart for Alaska. The Midnight Sun says, more or less, her "nuanced and informed" views on immigration -- not screaming that Syrian refugees will be the death of us all -- aren't likely to gain traction with voters who want red meat. Once again, however, we must recall the assessment of noted political pundit Our Girlfriend, who reminds us there aren't any sure bets in 2016.

The other big question for Alaska's 2016 Senate race: Who will Sarah Palin endorse? We haven't the slightest idea, and we're not even going to look, because we'd far rather sort through the week's deleted comments than contemplate such a thing.

This is where we'd include links to the candidates so you can throw money at them. Problem is, the Dem we like, Ray Metcalfe, doesn't seem to have a donations page up yet, with a bit over a month to go before the primary. Edgar Blatchford has a donation page run by ActBlue, so it's the only readable part of his campaign site. Richard Grayson will just growl at you if you offer him money. Margaret Stock has a donation page right here. This week, your better use of extra couch-cushion change would probably be a nice donation to Wonkette's tip jar, so we can get through the remaining 17 Senate races this year.