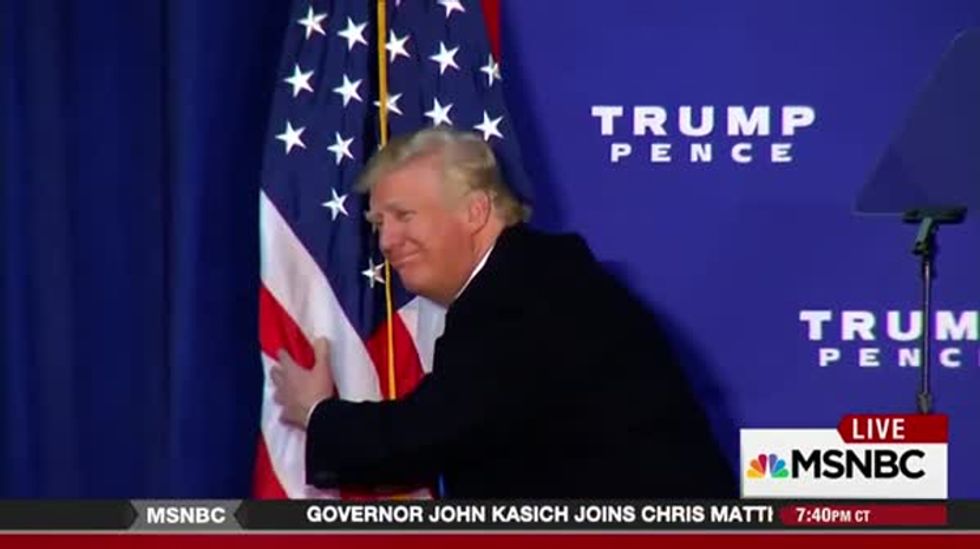 'Please, no tongue. I'm not that kind of banner.'

This one worries us a bit, knowing how much Donald Trump admires Rodrigo Duterte, murderous nationalist president of the Philippines: That country's House of Representatives passed a bill Monday requiring that people must sing the national anthem whenever it's played in public, and they'd darn well better mean it:

If the bill, which will be considered by the Senate, is approved and signed into law, a failure to sing the anthem, “Lupang Hinirang,” with sufficient energy would be punishable by up to year in prison and a fine of 50,000 to 100,000 pesos, or about $1,000 to $2,000. A second offense would include both a fine and prison time, and violators would be penalized by “public censure” in a newspaper.

“The singing shall be mandatory and must be done with fervor,” the bill states.

The bill also specifies the anthem must be performed at a tempo between 100 and 120 beats per minute, and also that schools ensure that all children memorize the song. It apparently doesn't say anything about whether presidents are either required to or forbidden from dancing around like a toddler with a full bladder during the anthem.

President Trump starts singing along with the national anthem at Arlington Cemetary #MemorialDaypic.twitter.com/wb383smSFy

The New York Times article goes on to review several other countries' laws on mandatory patriotism, like a ruling by India's supreme court requiring that movie theaters play the national anthem before every showing, and that audiences will darn well stand up for it or go to jail. In December, 19 people actually were arrested, in two separate incidents, for violating the ruling. In a subsequent case this February, the court clarified that audiences wouldn't be required to stand if the anthem is played as part of a film, because apparently some police got overzealous and arrested people during a screening of a film with the anthem in it. Pity -- that forecloses the possibility of a trolling movie with the anthem in it every few minutes, just to keep people on their toes.

Now, yes, the USA does have a First Amendment that prevents the government from compelling speech or action like those other countries, but if the Indian SCOTUS rules in favor of mandatory flag fetishism, is there any doubt Donald Trump, who literally hugs flags and has only the foggiest understanding of our Constitution, might start getting ideas about mandating displays of patriotism? Even if he can't pass a law, he could certainly use his administration and the loyal wingnut media to push for more flags, more anthem-singing, more pledging allegiance (to the flag, though pledges to Trump are nice, too), and more enthusiasm about it all, goddamnit. Everybody show how much you love America, or else. Remember how well that worked for George H.W. Bush in the 1988 campaign? We're moving into Silly Season, so why not another wave of artificial panic about flag burning?

Yr Wonkette is supported by reader donations. Click the "Donate" linky to help us continue giving U.S. America the Tough Love it needs.