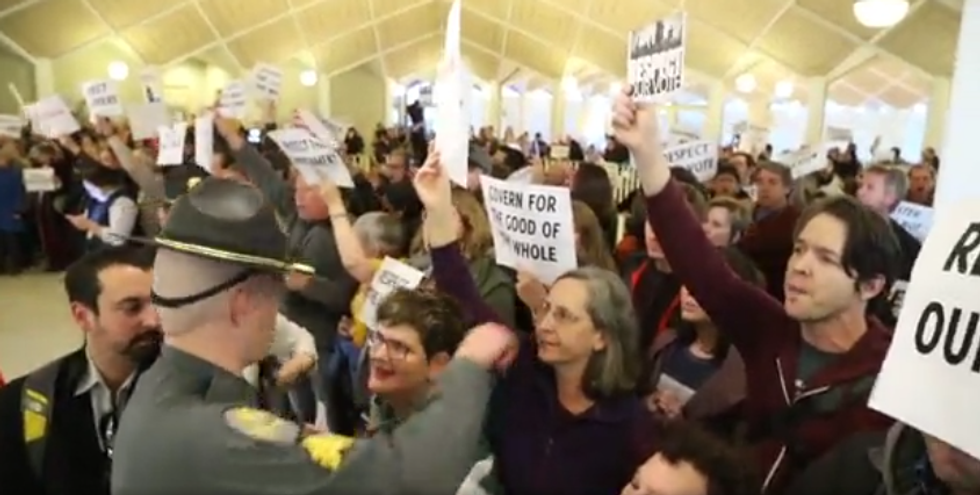 Coups, they are all the rage these days in America! There is the FBI-Russian hacking coup that barely elevated Donald Trump to the presidency by a margin of minus three million votes, and there is also the hilarious, democracy-killing coup North Carolina Republican legislators are pulling, because they are sad and butthurt about how a dashing Demon-crat, Roy Cooper, seized the governorship from Republican Pat McCrory, by winning more votes in the election. The shenanigans began Wednesday, as a special session of the legislature was called, for "hurricane relief," and quickly turned into Republicans cramming through as many bills as they could to take power away from the incoming governor -- you know, fun things like requiring state Senate confirmation for all the guv's cabinet members, and reducing by 1200 the number of staffers he's allowed to appoint without confirmation. Just normal democratic measures by the opposition party, in order to basically negate the vote just taken by North Carolinians!

Well the funsies continued Thursday night, but this time with the added bonus of arresting protesters (including a journalist!) and banning the public from the chambers, so those poor, put-upon Republican legislators could pull their pants down and do Number Twos all over democracy IN PRIVATE, PLEASE AND THANK YOU.

Protesters shouted "Shame, shame, shame," according to ABC affiliate WTVD, and carried signs that read, "Protect Voting Rights," "The Nation is Watching, GOP," and "Say No To Power Grabs."

Sixteen people were arrested, according to WTVD. The arrests occurred when Speaker Tim Moore ordered the gallery cleared. Supporters in the rotunda chanted, "this is what democracy looks like," as the protesters were led out in plastic handcuffs.

How nice! Now, according to ABC, the protesters were released quickly, so we can thank our lord and savior Santa Claus that people aren't being hauled off to the gulags just yet.

Once those dirty stinky hippie protesters were gone, the North Carolina House was free to pass House Bill 17, which includes the provisions we mentioned above, and also takes away the governor's right to appoint people to university boards of trustees and "radically reorganizes governance of North Carolina’s public schools," according to NC Policy Watch's Progressive Pulse. Now it will go to the Senate, where it will probably pass! Maybe outgoing Gov. McCrory will sign it, or maybe he will veto it like a grown-up, but that's no big deal because PFFFFFT, the GOP's super-majorities in the legislature (thanks to illegal racist gerrymandering!) will help them over-ride it if so! NORTH CAROLINA, FUCK YEAH!

And here is the Senate legislative gallery being cleared of gross democracy supporters:

And finally, here are some protesters getting arrested:

Governor-elect Roy Cooper is not amused by all this:

"Most people might think this is a partisan power grab, but it is really more ominous," said Cooper. "It's really about hurting public education, working families, state employees, health care, and clean air and water."

Yep, that's the GOP in a nutshell!

Anyway, protesters are back at the legislature today, and we're sure there will be more hijinks to report when they happen.

DEMOCRACY. GET SOME! While you still can.