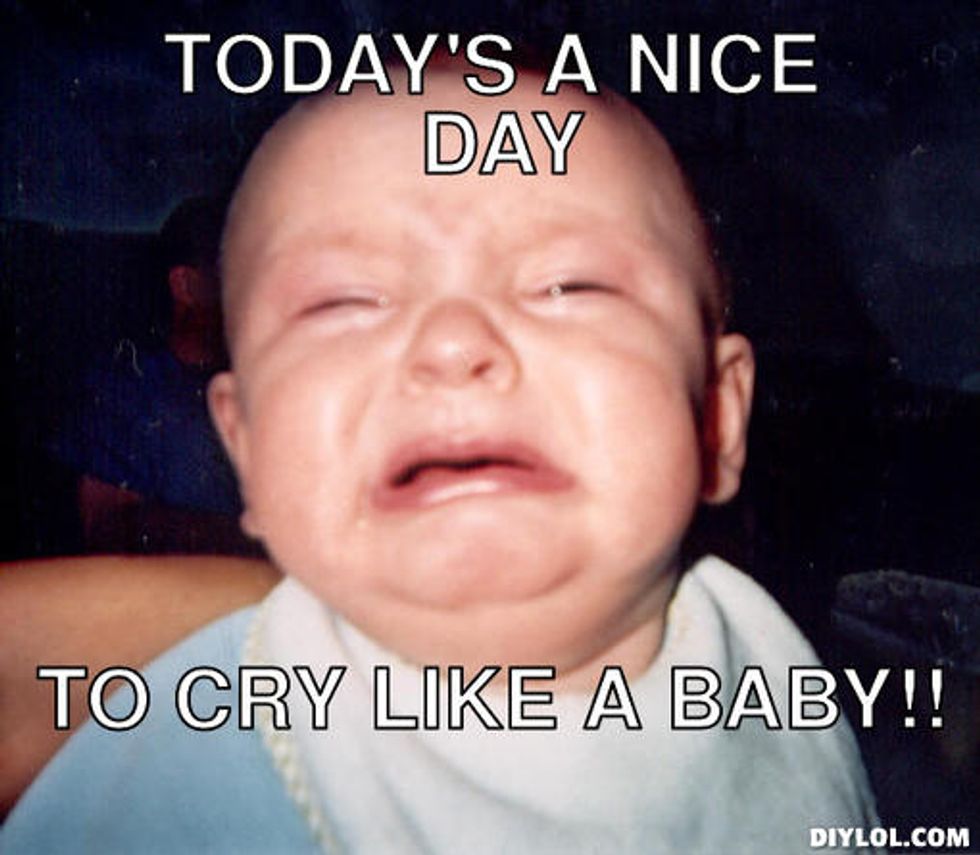 Everyone, please pull your tiny violins out of their tiny violin cases, so we all can play a sad serenade for North Carolina Republicans, who are crying us a goddamned river right now, just because the NCAA has pulled all its championship games out of the state, citing the grotesquely hateful and discriminatory HB2 law. If you missed the news, here is what had happened:

In a news release Monday, the NCAA says the decision by its board of governors came "because of the cumulative actions taken by the state concerning civil rights protections."

"This decision is consistent with the NCAA's long-standing core values of inclusion, student-athlete well-being and creating a culture of fairness," said Georgia Tech President G.P. "Bud" Peterson, the chair of the board of governors.

So yeah, the North Carolina GOP is so mad right now. They are mad enough to make gender-conforming whizzes and poops in their pants! Check out this hilarious statement, which we will of course transcribe:

This is so absurd it’s almost comical. I genuinely look forward to the NCAA merging all men’s and women’s teams together as singular, unified, unisex teams. Under the NCAA’s logic, colleges should make cheerleaders and football players share bathrooms, showers and hotel rooms. This decision is an assault to female athletes across the nation. If you are unwilling to have women’s bathrooms and locker rooms, how do you have a women’s team? I wish the NCAA was this concerned about the women who were raped at Baylor. Perhaps the NCAA should stop with their political peacocking — and instead focus their energies on making sure our nation’s collegiate athletes are safe, both on and off the field.

Hahahahaha, know what is actually absurd and almost comical? This dumbass statement from Kami Mueller, the spokeswoman for the North Carolina GOP. Let us count the ways:

[wonkbar]<a href="http://wonkette.com/606155/texas-attorney-general-will-save-north-carolina-from-transgender-pee-pee-monsters"></a>[/wonkbar]You'll remember also that the NBA pulled the 2017 All-Star Game out of Charlotte and moved it to New Orleans, which elicited whiny boo-hooing from dingbat Republican North Carolina Gov. Pat McCrory. He is bitching about the NCAA's decision too, but it's not quite as funny as that thing above from the state GOP. He just really thinks the NCAA and others shouldn't do things like this until North Carolina and all those other states are done suing America for forcing transgender potties down their throats. Oh, and also this:

“Sadly, the NCAA, a multi-billion dollar, tax-exempt monopoly, failed to show this respect at the expense of our student athletes and hard-working men and women.”

Can it, you stupid crybaby.

It's got to be so confusing for Republicans, watching sports leagues taking the side of humanity and decency, instead of helping them feel better about their bigotry. It's got to be absolutely befuddling for them to read the statement from John Swofford, commissioner of the Atlantic Coast Conference (ACC), the division of the NCAA North Carolina is in, when he says, "On a personal note, it's time for [HB2] to be repealed as it's counter to basic human rights." HE'S SO MEAN!

WHY do corporations and celebrities abandon states that discriminate against people these Republicans are pretty sure Jesus hates? WHY is it good business for corporations and other entities to be open and accepting? WHY would anybody care more about a buncha fag-genders than they care about the Sincerely Held Religious Beliefs of people who have been brainwashed to hate anyone who is different from them?

WHY does the mean lady running for president agree with the NCAA right now? (Pffffft, because she is a gay liberal commie, just like the NCAA obviously is.)

WHY are these wingnuts the only ones screaming and pointing at everybody else and saying, "WE ARE NOT CRAZY, YOU ALL ARE CRAZY"?

We guess they'll never understand. Oh well, they are dumb, LOL, post over.